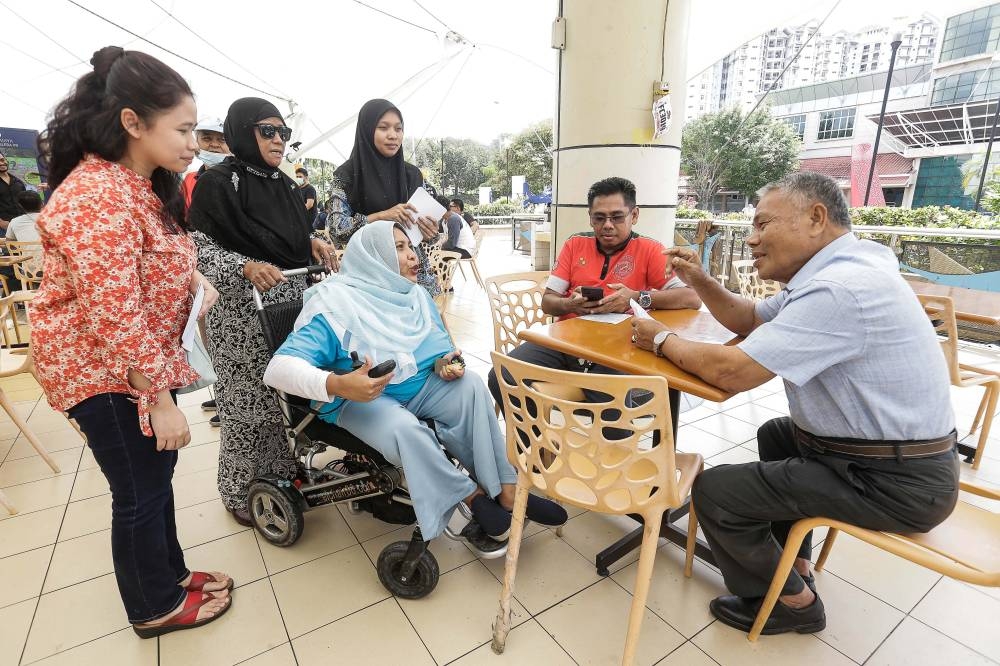 PUTRAJAYA, Nov 11 — Senior lecturer Noraishah Mydin Abd Aziz finds pleasure and solace in the simplest things: Her rose garden, the company of her students, and her state-of-the-art lab.

When Malay Mail met her at the Parasitology Department of the University of Malaya (UM), the woman who calls herself “Ecah” proudly showed us her lab with bottles of chemical solutions, glove boxes and powerful imaging equipment — some of them labelled as her property; she had used her own money to make the lab one of the best in the country.

On her office table, amid the organised chaos of cables, tabs of medicine to treat multiple sclerosis, wedding invites and a prayer mat, were two more microscopes — both covered up.

“All of my equipment is still in tip-top condition, because I take care of them. This is my home,” she proudly beamed.

Across her table was a chair, and on it was the reason why she would have to leave the lab and resign as a civil servant a few days after speaking with Malay Mail. It was a tote bag with the words “Ayuh Malaysia” printed on it.

In March this year, PKR deputy president Rafizi Ramli launched Ayuh Malaysia, a movement to court fence-sitters ahead of the 15th general election (GE15). Noraishah was one of those who found her epiphany from the movement.

So when on October 6 she found out that Rafizi was recruiting prospective candidates for the 15th general election, she officially joined PKR.

“I was near the Sungai Besi toll when I heard about it,” she told Malay Mail, relating that she was returning from a research trip to the Sultanah Aminah Hospital in Johor Baru to access archival data on rehabilitative patients.

“I just wanted to show that whatever Rafizi says, whatever he wants to do, I will support him. I had never even thought of becoming a GE15 candidate,” she said.

Three days later, when she was gardening right after the subuh prayer at dawn, she got a call from PKR information chief Fahmi Fadzil asking for her MyKad number.

“If I had known that was my last free day, I’d have spent more time gardening,” she said, laughing. “Fahmi called me asking for my IC number, I was like ‘no I’m not giving you my IC number!'”

The misunderstanding was swiftly remedied after she mailed Rafizi himself for clarification. By the end of October, she would be announced as one of seven “high-profile” community leaders that PKR will field in GE15.

A few days later, she was named as PKR’s candidate for Putrajaya, forcing her to reluctantly quit as a lecturer at UM.

Across her office is a counter where Norashikin said she is the “king of her domain”, where every piece of equipment and material is within her reach when she is seated in her standing wheelchair.

The long corridor of the Parasitology Department is not that wide as the Faculty of Medicine is an old building, nor are the spaces between the lab counters. Lacking mobility, she would sometimes shout in order to relay her instructions to her assistants. Noraishah made do with her situation, and the elevators situated right in front of the department were a boon.

The counter across Noraishah Mydin Abd Aziz’s office which she calls her ‘domain’ and can easily access using accessibility tools. — Picture by Zurairi A.R.

But by her own admission, life has never been easy for her. At the start of our interview, Noraishah took several moments to compose herself, and asked for complete silence from her students in the lab as she struggled to recount the pain of her early childhood as a neural tube defect (NTD) patient.

“Growing up with spina bifida in Malaysia, when going for treatment, people don’t see us as humans … Just because we are children, doesn’t mean we don’t understand the concept of shame, privacy.

“But you imagine, a kid would be admitted into a room surrounded by people they don’t know. It was a very frightening situation. I’ve faced this since young, I would never forget it.

“This is why my fisabilillah is so strong,” she stressed, using the Arabic term for someone who fights for a cause, for the sake of God.

Noraishah highlighted how children suffering from NTD have little say in their lives, and this struggle to ensure that no other child would face the same dark experience as she did has driven her from early on.

During our interview, Noraishah would recall some of her most treasured memories with her single mother, brother and sister, as a child on crutches, and later wheelchair.

But her memory was also laced with the hardships faced by her mother, the resentment in the family due to her medical condition, and her feelings of being denied the same opportunities — especially in education — as others who do not have a disability.

“For so long I’ve run away from those bad memories. All I did was focus on how to be normal … All I’ve done is ‘kill myself’ and get as much knowledge and recognition,” she said.

However, while she has used her expertise to help other parents with children suffering from spina bifida, she found her career path effectively stagnating due to her being outspoken, among others in support of the student union, and refusing to kowtow to what she highlighted as “toxic” office politics among some of her fellow academia — many whom she labelled as poyo, or Malay for “lame.”

As a result, she bounced from department to department for 15 years without ever attaining an associate professorship: First from Rehabilitative Medicine, then to Biomedical, until she found her refuge in Parasitology.

Noraishah recounted several cases of alleged corruption and academic misconduct committed by her fellow academics. Malay Mail could not verify her allegations at the time of writing.

Noraishah’s straight-talking bluntness may have erected an early obstacle to her nascent political career.

During her first session with Pakatan Harapan’s (PH) volunteers in Putrajaya, Noraishah was unapologetic about her attacks against not only leaders of Barisan Nasional and Perikatan Nasional, but also PH, on her social media accounts.

“I have opened my mouth for so long, to remove any obstacles, so I can move forward. But I won’t bodek anyone,” she said, using the Malay word meaning “bootlicking”.

Days after her candidacy was announced, she was attacked on social media for her profanity-laced posts lambasting the BN and PN administrations for their shortcomings in providing accessible healthcare to all.

To her advantage, many Malaysians online rallied to her side instead — seeing her candour as refreshing.

“I don’t care anymore,” she said, relating her response to her friends and fellow academics on why she decided to become politically outspoken.

The way that things are under PN, researchers are not getting grants, there is no career path for my beloved students … Things are so bad that you don’t give us any space to live a life of dignity. Enough already.

“I’m going to do everything I can to put Rafizi in power. Ecah tak kisah,” she added in Malay, meaning “Ecah doesn’t mind.”

Noraishah Mydin Abd Aziz speaks to one of her lab assistants in her imaging lab in the Parasitology Department, University of Malaya, November 1, 2022. — Picture by Zurairi A.R.

Now with a chance to enter the Dewan Rakyat, Noraishah said she is excited to not only shine a light on NTD and improve access to healthcare, pointing to what she said is her greatest talent: Linking people in need with the best help they can get.

“In my opinion, I’m the most unselfish, transparent, obsessive-compulsive woman in Malaysia who understands these things in and out, and I’ll do everything to champion the disenfranchised in the system. That’s who I am, and that’s what I intend to do,” she said.

Wheelchair-bound, she is also cognisant of the responsibility to carry the voices of the disabled community — despite not being a disability activist prior to this.

“I don’t mind carrying whatever burden, as long as it belongs to the people and I can improve their lives,” she said.

“They are my community as well, whether they want to accept me or not is up to them. but I’m never going to stop fighting for what I believe in,” she said, referring to the PWDs.

Despite the initial hiccups with her candidacy among the PH grassroots, Noraishah and her team have now offered voters her five-point manifesto for Putrajaya focusing on: Uplifting civil servants, strengthening public infrastructure, addressing rising costs of living, developing the future generation, and safeguarding the security of the neighbourhood.

Under her second point on strengthening public infrastructure, she has vowed to address the lack of facilities for PWDs by, among others, reforming the Persons with Disabilities Act and commissioning an audit of accessibility.

She has also pledged under the first point to uplift civil servants, she also promised to review the policy mandating 1 per cent representation of PWDs in the civil service, so the community will be offered more meaningful posts. Her fourth point of developing the future generation also proposed early identification and intervention for children with disabilities.

To achieve all this, Noraishah does not seem to be alone. She admitted that it is common to see her in UM surrounded by her students, and some of them have now followed her into campaigning. “My kids keep me honest,” she said.

“All I want to do is solve problems so that we can all get on with our lives with better quality, and be proud to call ourselves Malaysians who treat each other with kindness, dignity and knowledge.

“That’s what I want for my country,” said Noraishah.