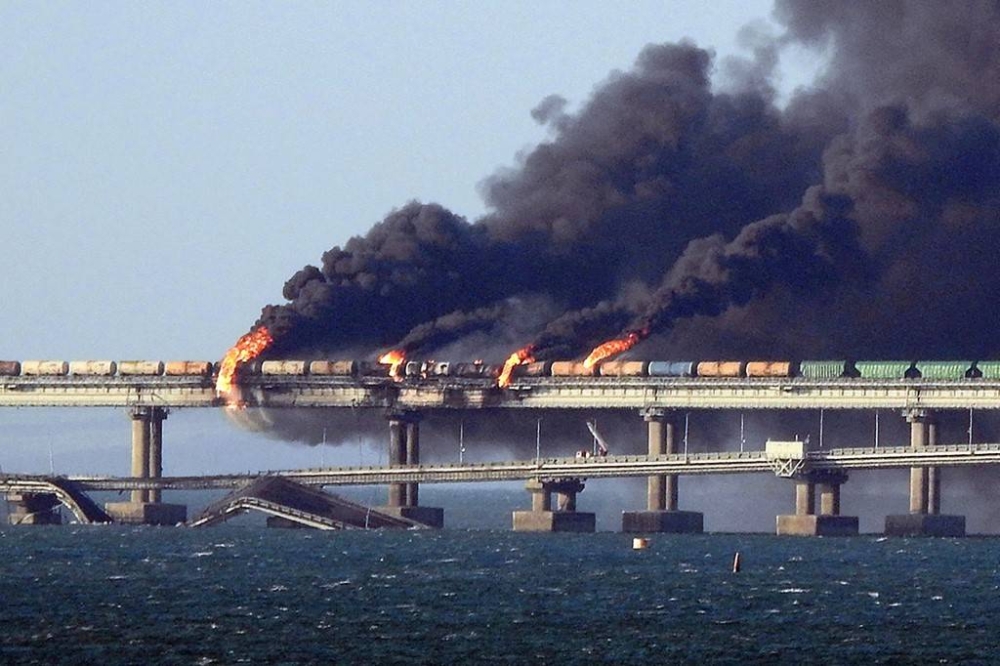 Black smoke billows from a fire on the Kerch bridge that links Crimea to Russia, after a truck exploded, near Kerch, on October 8, 2022. Moscow announced on October 8, 2022 that a truck exploded igniting a huge fire and damaging the key Kerch bridge — built as Russia’s sole land link with annexed Crimea — and vowed to find the perpetrators, without immediately blaming Ukraine. — AFP pic

MOSCOW, Oct 9 — Russia said yesterday three people had been killed after a truck exploded on its bridge linking Crimea — a symbol of its annexation of the peninsula — without immediately blaming Ukraine.

On the same day, after a series of setbacks on the battlefield that triggered unprecedented criticism of its army at home, Moscow appointed a new general to lead its Ukraine offensive.

The blast ripped through the 19-kilometre (12-mile) bridge more than seven months into Moscow’s Ukraine offensive.

Local officials said later that it had reopened to motor traffic with vehicles subject to stringent screening. Shortly after, Grand Service Express, which operates rail services there, said the first trains had left the peninsula for Moscow and St Petersburg.

The blast aroused intense excitement and speculation from Ukrainians and others on social media, but Ukrainian President Volodymyr Zelensky made no direct mention of it in his nightly address, and officials made no claim of responsibility.

Earlier, dramatic social media footage showed the bridge on fire with parts plunging into the water.

Russian investigators said three people had been killed. The bodies of an unidentified man and a woman were pulled out of the water, likely passengers in a car driving near the exploded truck, Moscow said.

The authorities also said they had identified the owner of the truck as a resident of Russia’s southern Krasnodar region, saying his home was being searched.

The bridge is logistically crucial for Moscow, a vital transport link for carrying military equipment to Russian soldiers fighting in Ukraine.

It is also hugely symbolic.

President Vladimir Putin personally inaugurated the bridge in 2018 — even driving a truck across it — and Moscow had maintained the crossing was safe despite the fighting.

While some in Moscow hinted at Ukrainian “terrorism”, state media continued to call it an “emergency situation.”

In his address, Zelensky spoke of a “sunny” future for Ukrainians — one without occupiers, “in particular in the Crimea.”

While he made no mention of the strategic bridge, his advisor Mykhailo Podolyak earlier posted a picture on Twitter of a long section of the bridge half-submerged.

“Crimea, the bridge, the beginning,” he wrote.

“Everything illegal must be destroyed, everything stolen must be returned to Ukraine, everything occupied by Russia must be expelled.”

But in a later statement, he appeared to suggest that Moscow had a hand in the blast.

“It is worth noting that the truck that detonated, according to all indications, entered the bridge from the Russian side. So the answers should be sought in Russia,” he said.

The Ukrainian post office announced it was preparing to print stamps showing the “Crimean bridge — or more precisely, what remains of it”.

The Kremlin’s spokesman said Putin had ordered a commission to be set up to look into the blast.

Officials in Moscow stopped short of blaming Kyiv, but a Russian-installed official in Crimea pointed the finger at “Ukrainian vandals.”

Some officials in Moscow and in Russian-occupied Ukraine called for retaliation.

“There is an undisguised terrorist war against us,” Russian ruling party deputy Oleg Morozov told the RIA Novosti news agency.

A Russian-installed official in the occupied Ukrainian Kherson region, Kirill Stremousov, said: “Everyone is waiting for a retaliatory strike and it is likely to come.”

Military analysts said the blast could have a major impact if Moscow saw the need to shift already hard-pressed troops to the Crimea from other regions or if it prompted a rush by residents to leave.

Mick Ryan, a retired Australian major general now with the Center for Strategic and International Studies in Washington, said that even if Ukrainians were not behind the blast, it constituted “a massive influence operation win for Ukraine.”

“It is a demonstration to Russians, and the rest of the world, that Russia’s military cannot protect any of the provinces it recently annexed,” he said on Twitter.

Authorities in Crimea tried to calm fears of food and fuel shortages in Crimea, dependent on the Russian mainland since Moscow annexed it in 2014.

The blasts come after Ukraine’s recent lightning territorial gains in the east and south that have undermined the Kremlin’s claim that it annexed Donetsk, neighbouring Lugansk and the southern regions of Zaporizhzhia and Kherson.

After weeks of military setbacks, Moscow on Saturday announced that a new general — Sergei Surovikin — would take over its forces in Ukraine.

Surovikin previously led Russia’s forces in southern Ukraine. He has combat experience in the 1990s conflicts in Tajikistan and Chechnya, as well as, more recently, in Syria.

The decision, which — unusually — was made public, comes after growing discontent among the elite over the army’s leadership.