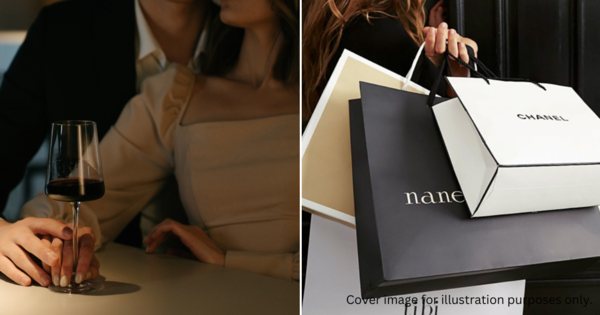 There’s hardly any in between when it comes to the public perception of sugar babies: are they driven go-getters, or modern-day gold diggers?

Falling prey to widespread stereotypes that are often inconclusive or straight up untrue, how fair is it to paint all sugar babies with the same brush when we aren’t certain about the depth of their lives?

To fully understand the nature of some of these enigmas, SAYS recently had a conversation with a Malaysian sugar baby, to divulge into a multitude of topics relating to her life path since embarking on this journey.

Disclaimer: The name of the interviewee has been changed for privacy purposes.

24-year-old Olivia has been a sugar baby for the past six years, and despite what many may think, still holds pride to her status as a long-time sugar baby

“There’s no shame in it as far as I see. Often times, I reckon that widespread jealousy leads to people [resenting] me for my life choices,” she said in an interview with this SAYS writer.

Starting from the very beginning, we broke down what being a sugar baby means to Olivia. “Many [sugar] babies have different opinions on the term. For me, it is a transactional relationship where a sugar daddy or mommy, mainly a person who is financially comfortable, initiates a relationship with a sugar baby, someone younger and unattached. The pairing can be a romantic or platonic one. Sometimes it goes further, but generally I leave it to that.”

While the ongoing clich? enlists sugar daddies as carrying out such a relationship as a means to fulfil their sexual desires, Olivia immediately shut down such a notion. “I won’t be hypocritical, but that isn’t the case for most sugar daddies. Companionship is key when describing the complexities in many of these connections,” she conveyed.

“The world can be a lonely place, whether you are attached or not. Why go through it alone?”

Image for illustration purposes only.
Image via Power of Positivity

Currently, Olivia has one sugar daddy she’s been with for the past four years, though she admitted how it’s not unusual for some babies to have more than one ‘parent’

“We met on a dating app that exclusively seeks to connect sugar parents and babies. The app isn’t in operation any longer, but we’ve managed to keep things steady since 2018,” she said.

While most sugar babies often relent with one partner when seeking out a sugar parent, Olivia stated that certain babies may opt to have more than one sugar daddy if they are looking to sustain a more lavish lifestyle. “Most sugar parents prefer the undivided attention of one baby, but it’s always malleable to the circumstance. If they want complete commitment from that baby, more conversations are usually had. If not, they can just go out there and search for another who’s satisfied with the deal made.”

As for Olivia herself, her faithfulness to her current sugar daddy was primarily made for safety and health reasons. “Almost every sugar parent that wants to be intimate with their baby, as mine does, wants uninhibited freedom in the bedroom. So, I’d rather stick to one daddy.”

Taking precautionary steps along the way, Olivia was direct about unprotected sex being a regular thing expected from sugar babies, and it may sometimes be only physical, or not at all.

Image for illustration purposes only.
Image via Sugar Daddy Websites

Manoeuvring through obstacles, Olivia noted that she was weary of her safety being compromised when she first became a sugar baby. “I took a lot of precaution at the beginning. Booking Grabs away from my home, not giving them my address when they asked, but again, not being too suspicious of the reason why I wasn’t being fully transparent.”

Telling a story of another sugar baby friend of hers, Olivia told SAYS that when she tried to break up with her sugar daddy, it ended with him coming to her house and confronting her in front of the whole neighbourhood, thereby letting out their secret and exposing their relationship to her family.

“This is not a conventional pairing. They are very powerful people, and they can get away with anything they want to if you aren’t careful.”

“It’s not all about money and selling yourself — there are real bonds formed, real people’s lives are impacted by these decisions”

When speaking about her involvement in her sugar daddy’s life, Olivia was quick to dismiss the idea of sugar babies as modern-day prostitutes. “It needs to be something strong and concrete before you dive into the money.”

Passing out a ‘tip’ she learnt through being a sugar baby, Olivia stated that the constant talk about money is a major turnoff for most sugar parents. “It’s truly about getting to know each other, finding common ground, and developing a true heartfelt connection with the person you’re with, sometimes even love.”

Nevertheless, Olivia stated that she’s had to learn the hard way about managing her emotions through this process. “I ‘fell in love’ with my first sugar daddy. Whatever that means, and it ended badly. After starting anew with the daddy I have now, that topic is strictly off limits,” she said.

Explaining the fine line between companionship and partnership, Olivia was direct about the illusion sugar babies provide to their sugar daddies. “We’re not wives, or consorts, or mistresses. We’re a temporary escape from the harsh realities of life, and a constant for their attention. If that makes sense.” Continuing on, she said “It’s easy to fall into that trap when you’re young. But if this is what you want, you have to learn along the way that it’s not all what it seems to be.”

Image for illustration purposes only.
Image via MART PRODUCTION/Pexels

On the topic of financial freedom, Olivia was forthright on how the provision by her current sugar daddy has made a remarkable impact in her life

At present day, Olivia receives about RM15,000 a month in allowance, excluding gifts. Part of their agreement also asserts that Olivia be taken on any holiday at least once a year. “We go on at least three holidays a year, though with COVID-19, we hadn’t travelled internationally until earlier this year when he took me to Dubai for my birthday.”

Despite this, Olivia stated that her price is not meant to be dangled in the air like a carrot to a horse. “I care for him deeply, and over the years, I’ve come to know what a good man, father, and person he is. But this is a deal at the end of the day, and I will not stand for anything less than I deserve.”

Getting to know him on a deeper level, Olivia mentioned that when she met her sugar daddy in 2018, he was at the tail end of a divorce, and has two children in their teens that she’s yet to meet. “There will always be some level of disconnect because of the nature of our relationship. Frankly, I am not keen on meeting his children considering the manner in which we are intertwined.

Image for illustration purposes only.
Image via Sugarbook

Born into a poverty-stricken household, Olivia told SAYS that her entrance into the world of sugar babies came from a necessity to succeed. “My parents couldn’t afford to send me to university due to our funds. I tried everything I could — part-time jobs, waiting tables, but it seemed as though I was in a never-ending cycle I couldn’t leave. So, I went online, and the rest is history.”

Olivia stated that her parents are aware of her seeing a sugar daddy. “I told them at first that I was going out with a guy who was wealthy around my age. But when the gifts started to flow in, I copped and told them eventually. They weren’t happy at first, but over time, and seeing what I’ve been able to do with the opportunity he has given me, they understand that he is the financial provider they weren’t.” Beyond her familial unit, only a few close friends know of her sugar daddy.

Through his funding, Olivia was able to complete an undergraduate degree in fine art, and is currently pursuing a master’s degree in the same division. “He’s given me freedom which can impact me for the rest of my life, that is priceless. So when you think about what I have to give in return, it’s nothing.”

As for flaunting the most opulent gifts she has received, diamonds from Tiffany’s and first-class trips to Paris are a norm in her life. “The most expensive thing he’s ever paid for has to be the private jet. He flew me and my two friends to London, and we stayed at Mandarin Oriental in Hyde Park. It was the trip of a lifetime; I’d never trade that memory in for the world.”

Image for illustration purposes only.
Image via Wealth Magazine

Yet with the good, always comes a downside, as Olivia’s concerns about her future burn brighter as days go by

“[My relationship with my sugar daddy] has definitely damaged how I view men. I’m not free to meet a partner who I’d like to settle down with, and I can’t move forward without the financing I’m currently receiving,” she noted. In the future, Olivia does hope to get married and have her own family, to leave this element of her life in the past when the right person comes along.

Explaining a relationship from the past, Olivia recalled how a boy she was romantically involved with insulted and belittled her after she told him about her sugar daddy. “It’s very easy to judge me. But they don’t pay my bills, they don’t see how some of my allowance even goes to my family for survival. How would they know the road I’ve had to walk to get to where I am now?”

An aspiring art critic, Olivia is aware an expiration date lies for her tenure as a sugar baby. Explaining the reason behind her goal to terminate being a sugar baby, the glitz and glamour is only a fa?ade to true issues that lie beneath the surface. “It’s not my forever, but it’s forever for now.”

Image for illustration purposes only.
Image via The Indian Express

In an attempt to dispel negative perceptions of sugar babies, Olivia had this to say to the Malaysian public:

The reported number of sugar daddies in Malaysia is staggeringly high:

Here are some crazy sex stories Malaysians weren’t too shy to share: