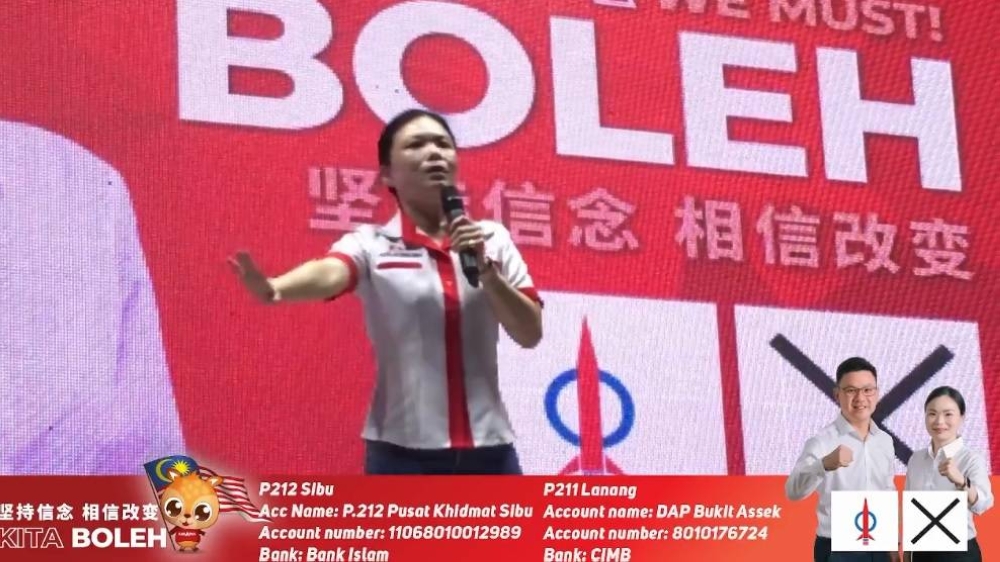 A screengrab of Lau speaking at the DAP ceramah. — Picture via Borneo Post

SIBU, Nov 13 — Lanang incumbent Alice Lau has reminded all electorates that their votes count and will decide who the next prime minister of Malaysia is as well as which political parties will come together to form the next federal government.

The Democratic Action Party (DAP) leader said voters should never ever think that their votes do not matter and let others who cast their votes decide for the future of the country.

“If you do not come out to cast your vote on Nov 19, and the next government and prime minister elected is not what you want, it will be pointless for you to complain.

“When you do not vote, you’re giving up your right to elect the next government and prime minister that you want. So, you will be in no position to complain that your country may be getting from bad to worse,” she said during the DAP ceramah here last night.

Lau claimed: “If you support GPS (Gabungan Parti Sarawak), Zahid will be the prime minister. If Umno does not have the simple majority, they will join Perikatan Nasional (PN), then you will have two choices of prime minister — Muhyiddin or Hadi Awang.”

She further claimed: “Ismail Sabri is just a poster prime minister. The real power is not in his hands. This parliamentary election is about electing our next prime minister.”

She asserted that a vote cast on Nov 19 would serve to decide the direction of the country for the next five years.

“This is why every vote is sacred and your vote does matter. We (DAP) lost many seats in the last state election because many voters forgot that every vote counts,” she said.

She related that DAP failed to retain Tanjong Datu with a razor-thin 23 vote-majority and Pelawan with a slim 100 vote-majority.

As such, she appealed to all voters to exercise their democratic right on Nov 19.

According to Lau, many of those who are working overseas such as in Singapore had enquired about postal vote registration as soon as Parliament was dissolved on Oct 10.

She regretted that some had missed out on the postal vote registration which closed on Oct 23.

“Many of those who are working in Singapore appreciate their votes. Some of them have received their ballot papers and decided who to vote for.

“They worry that their postal votes would go missing or that someone would do something to their votes. They dare not post their votes via air.

“Fortunately, they have someone who are flying home, volunteering to bring their postal votes back to cast them in person to make sure nothing would go wrong. This much they appreciate their votes,” she said.

Lau said these voters know what kind of government they want for Malaysia.

She opined that they would not have to seek employment outside the country had they had better job opportunities locally.

“So those who are in town, you must come out and cast your vote. And make sure to check your polling status because there may be a change of polling station due to an increase of over 20,000 new voters in Lanang,” she added. — Borneo Post