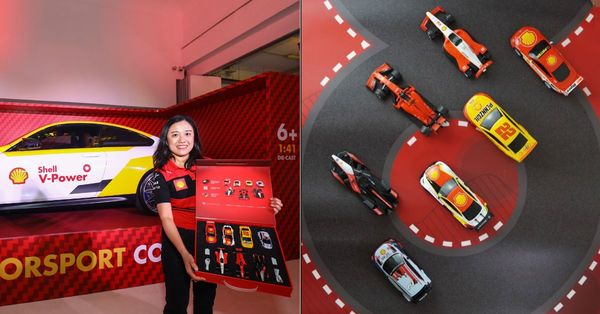 This Spotlight is sponsored by Shell Malaysia.

Have you ever imagined what it was like driving a race car?

As little kids, many of us dreamt of being in the cockpit of an F1 car or speeding through all kinds of terrains in a rally car. Even when we were too young to drive, it never stopped us from racing each other with toy cars, or saving up money to collect some toy models.

Well, we’ve got good news, ’cause you can bring this to reality with Shell’s all-new limited edition motorsports collection! 😀

If you’re an avid car collector, you will be dying to add these seven models from Shell’s prestigious partnerships in the motorsport scene to your collection!

To showcase the performance of their differentiated fuel, Shell V-power, the collection will feature seven high-performance toy model cars from some of the world’s top motorsports teams like Ferrari, Nissan, BMW, Ford, Hyundai, and more.

Shell’s partnerships with these motorsports teams showcase how incredible their products are made to perform in extreme conditions and ensure that these cars achieve their best abilities on the track.

For example, their partnership with Scuderia Ferrari has been one of the longest and most successful in motorsports. After over 70 years of working together, Shell still continues to sample and test their fuel and lubricants each race weekend to provide only the best.

More excitingly, we got a first-hand experience driving the whole collection with our smartphones, wheee!

The really cool thing about these cars is that they are innovatively designed with a smart battery, which includes a Bluetooth chip that can transform each car to become remote-controlled. How cool is that? :O

All we had to do was download the free Shell Racing App on our smartphone, and we were able to seamlessly control the racing cars. From there, we just became like little kids, trying out every little feature and pushing the cars to their limit.

For instance, some of the cars have lights that you can turn on, so you can challenge your buddies to a night race, as well as a honk feature which you can use to alert other racers to make way for the champ. 😛

And, the coolest feature has to be turbo mode, which really makes you feel as if you’re a real racer! The whole experience was so addicting, that we were actually sad to have to leave the cars behind after our little trial run. :’)

Here’s a closer look at each of the beautiful cars in the collection:

Want to know how to purchase Shell’s limited edition Motorsports collectables? From 8 October to 8 December, one model per week will be released exclusively at Shell stations nationwide.

So, whatchu waiting for? Mark your calendars and pay a visit to the nearest Shell station from now until 8 December.

With a minimum fuel purchase of RM50, you’ll be able to purchase separate car models or a Smart Bluetooth battery at RM30.

And, when you pump Shell V-power Racing Fuel for RM80 in a single receipt, you can purchase the limited edition collector’s box at RM80 and showcase your collection like a true motorsport enthusiast.

If you’re a Ferrari or Formula 1 fan, you wouldn’t want to miss out on the chance to win a free exclusive Ferrari SF90 racing car with one Smart battery. The best part is that it will be made available throughout the campaign duration. Yayyy! 😀 To get your hands on it, all you’ll have to do is buy selected Shell Helix Lubricant 4L from Shell stations nationwide.

Need a closer look at the cars? Head over to KL Sentral and Mid Valley Megamall, to experience racing these legendary mini cars on designated tracks.

To commemorate the launch of the latest remote-controlled collection, Shell is organising an event at KL Sentral from 17 to 23 October and at Mid Valley Megamall from 26 to 30 October to give the public an exclusive experience to try all seven racing car models on race tracks designed specifically to present each car in their winning atmosphere.

As an introduction to Shell’s rich motorsport partnerships history over the years, visitors will be treated to a viewing of the legendary Hyundai i20 WRC replica that clinched the latest WRC Championship title in Greece on site as well.

Ready to go vroom vroom? Collect all seven RC Motorsport models from your nearest Shell station and add them to your collection, while stocks last!

For more information, head over to the Shell Motorsport Collection Campaign website.

Check out our other #tech stories: