Why’s my chicken and egg so expensive? Blame it on their feed and rearing charges, say farmers’ group 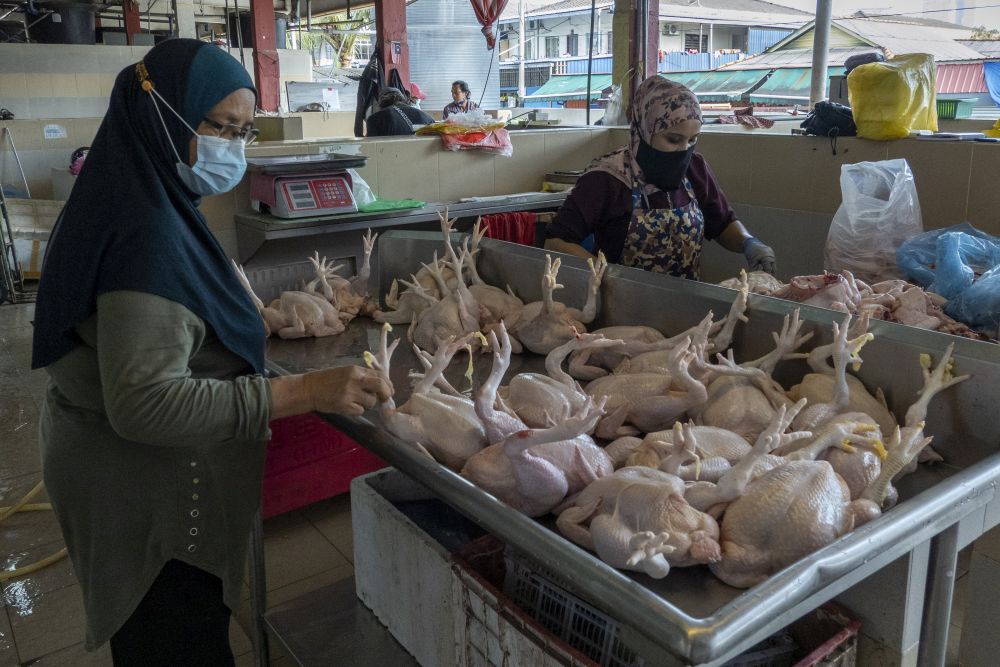 A woman looks at poultry for sale at the Petaling Jaya wet market April 20, 2021. — Picture by Miera Zulyana

KUALA LUMPUR, Sept 15 — One of Malaysia’s most popular sources of protein, chickens and their eggs, have seen prices shoot up in recent weeks, raising the eyebrows of their consumers.

The latest prices of a standard processed chicken range from RM8.50 to RM11 while the commonly bought Grade B eggs range from RM0.40 to RM0.49 in the peninsula and Sabah, and RM0.36 to RM0.38 in Sarawak, based on the latest food commodity list by the Federal Agricultural Marketing Authority (Fama).

Tiny Labuan has the highest price, at RM0.52 per egg.

The Federation of Livestock Farmers’ Associations of Malaysia (FLFAM) attributes the latest price surge for poultry to the rising cost of raw materials for chicken feed and labour charges.

According to FLFAM, the two main ingredients for chicken feed — corn and soybean — have increased dramatically in the past year by 80 per cent and 45 per cent respectively.

“This cost of raw feed materials is beyond the control of the poultry industry and it affects not only Malaysia but the whole world.

“As it is an imported ingredient, the price of these imports is affected by the availability such as the weather in the producing countries,” it said in a statement yesterday.

FLFAM cited Brazil as an example, saying the country’s corn and soybean production is deeply affected by drought and cold weather.

As both raw materials are imported products, prices are also heavily affected by the ringgit’s current exchange value, FLFAM added.

Another factor that contributes to the rising prices of chicken broilers and eggs are the effects of the Covid-19 pandemic on its labour force.

FLFAM stated that farms, whose workforce are heavily dependent on foreign workers, are facing labour shortages as well as increased costs to comply with SOPs set by the government.

“The Covid-19 pandemic has also affected the productivity of the poultry farms where the industry is dependent on foreign workers.

“The shortage of labour is an important factor whereby the farms are currently facing insufficient numbers of farmworkers to carry out the daily work of the labour-intensive jobs like cleaning the barns, catching of chicken and preparing the farm for new batches of replacement stock.

“Farms experienced increased costs due to the need to comply with the pandemic’s SOP requirements for farmworkers,” it said.

The association also said that many of the sector’s workforce had returned to their respective home countries due to the pandemic.

It said there’s now a shortage of farmhands nationwide as owners are challenged to find replacement workers. As such, farm owners have to pay their workers extra to work overtime.

FLFAM said the losses incurred by the poultry industry are well documented, especially for public companies listed in Bursa Malaysia.

Back in April, FLFAM has also issued a similar statement on the rising cost of chicken and eggs, where it has claimed that the cost of raw materials used in chicken feed has risen by more than 40 per cent since last year, along with an unspecified increase in labour costs.