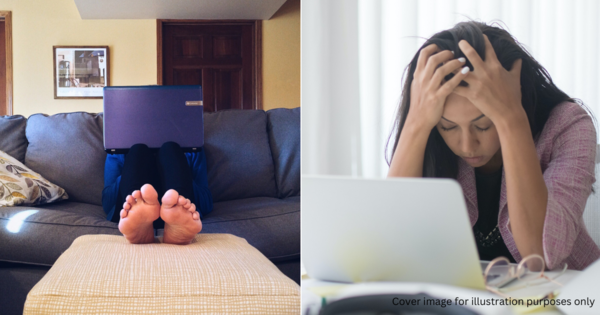 Working from home (WFH) has become a way of life for most offices since COVID-19 hit the world in 2020.

But with the urgency of the virus coming to a close, these measures have started to roll back — and not all employees are happy about it.

Taking to Reddit to express his frustrations, one Malaysian, who goes by the username u/Bestow5000, published a post on the subreddit group, r/Malaysia, asking why WFH isn’t the future yet.

Citing issues which included horrendous traffic and viewing studies of staff performance working from home, the man believes that WFH at least once a week is the way to go.

“It increases productivity and helps a lot with the current issues with traffic and even money. I’ve talked to a few people who have the luxury of doing so, and they’ve been happier with their lives. Not all jobs can be done from home, but those that can should [make it the] standard,” he wrote.

The user continued by lamenting his frustration over his boss’ outdated mindset, that despite his work just requiring the use of a computer, he does not allow him to work from home. Ending his post, the user asks what people think about the idea of WFH.

Image for illustration purposes only.
Image via Pixabay/Pexels

Receiving a 96% upvote score on Reddit, an abundance of users came forward to express their take on the matter

A number of Redditors blamed the rollback on the mindset of most employers, as they belong to an older generation that is thoroughly unfamiliar with how the WFH processes go.

“[They] don’t see a need to change, always going on about creating an office culture. Depending on the boss, they also want to be able to yell at you,” said one user bluntly.

While one user admitted to preferring a hybrid work environment, they stated that managers cannot micromanage workers remotely, and will only be able to see what one is up to when they’re in meetings or zoom calls.

One user took a softer approach, saying that while he believes WFH is the future, it will take a great deal of time to replace the old mindset.

“Not easy to change outdated thinking that has been the norm since modern working culture.”

Giving a warning to younger people as they progress in the workforce, he opined how one should not forget to enforce WFH policies as they reach the top. “Don’t get stuck in the status quo.”

Adding an intrinsically valuable point, one user stated that the culture within working environments in Malaysia could be a point as to why WFH is not completely possible here, though it is popular internationally.

“Every country has different work cultures. Many European cultures have implemented remote working. [The poster’s] scenario is specifically for Malaysian work environment.”

Criticising his colleagues, one Redditor said that his co-workers going missing from their laptops and taking a long time to reply messages during their WFH periods made his boss very upset.

“My boss was pretty open to WFH, but a few bad apples spoil the whole basket. Even us that did our job perfectly got called back into office as she doesn’t want to be seen as biased towards some staff, which is understandable.”

A few users seemed to be split on the idea of fully WFH, saying that in some instances, working from the office has more benefits.

“Don’t get me wrong, I’d like to WFH, but to be honest, I’d get a lot of distractions while at home, and it affected my quality of work. It could be good for certain jobs, but for my job, as much as I hate going to the office, I need to be there,” explained one user.

Another user stated that his home environment calls for too many interruptions, causing more issues than not. “Things that can wait till I get back from the office become things that need to be solved immediately.”

Somewhat offering a resolve for those who are split on the situation, one commenter said that more Malaysians need to stand up for themselves while at the office.

“People in Malaysia need to be more vocal in their workplace. If there was more unity, you could get more things approved. Unfortunately, many times I’ve seen more brown nosing than fighting for their own rights.”

Nonetheless, a fair share of users expressed how they believe hybrid working environments are the real future of the workforce

Explaining his personal circumstance, one user stated how he is given the freedom to work from home and goes into the office whenever he pleases.

“I’ll go to the office one to two times a week so I can destress from WFH, seeing four walls and a laptop that’s always in reach, you’d be inclined to join meetings beyond working hours due to multi country work.”

Emphasising on the human interaction aspect of work, he went on to say how he enjoys seeing his colleagues, catching up with them, and discussing things in person, though more time would be wasted.

Explaining his and his wife’s current working status, one man elaborated on how young employers are probably the differentiating factor for this issue.

“I’m pretty lucky to work with a company [that has a] young CEO. I currently work 2.5 days in the office and 2.5 WFH. I can say with the utmost certainty that my productivity has increased tremendously.”

As for his wife, the man stated that she works for a fairly reputable design and build company, with employees only required to go on site when it’s needed. “And guess what? She has a young boss, too.”

Another user who admitted to being in a middle management position admitted that while he is fine with employees working from home, one condition must be fulfilled.

“My only condition is that they deliver results. As long as I call or message them, they can respond within five minutes. Give me what I ask for ASAP and deliver results within the planned schedule,” he exclaimed.

Admitting that his bosses liked to see them physically working in the office, he differed with the poster of the thread, stating that the option to fully WFH is still quite a distance away for most companies, with trust and discipline being major issues preventing its visualisation.

One woman recently shared why a high salary wasn’t enough to keep her at her former workplace:

This mother applied for a job on her child’s behalf, asking the prospective employer to conduct the interview at their house: