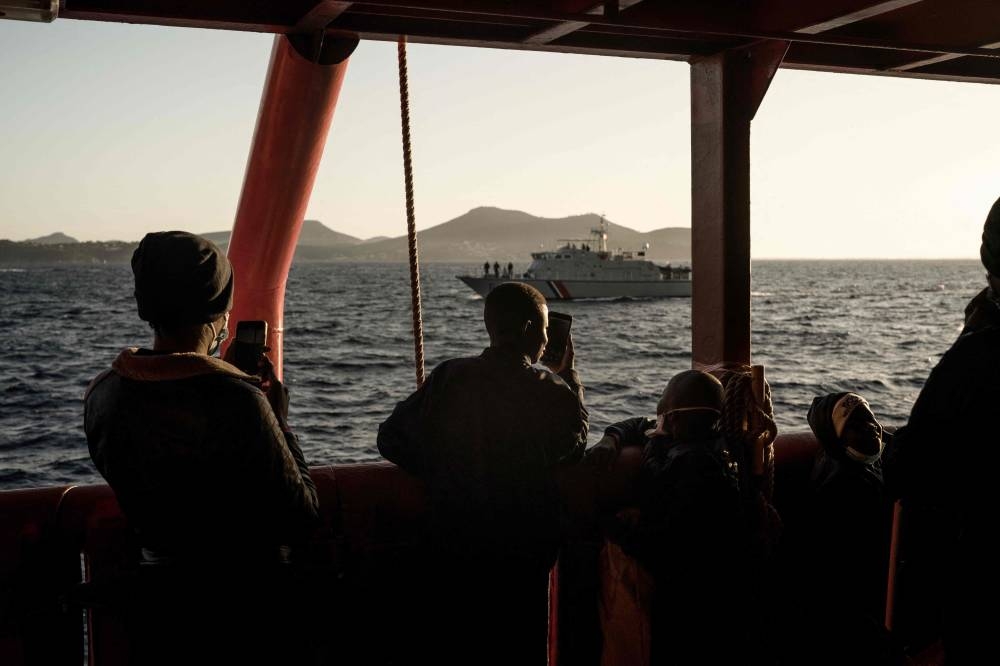 Migrants stand on board the Ocean Viking prior disembarking in Toulon on November 11, 2022, after being rescued by European maritime-humanitarian organisation ‘SOS Mediterranee’. — AFP pic

ROME, Nov 13 — Leona Blankenstein couldn’t believe what she was hearing when the Libyan coastguard threatened to blast her small plane out of the sky.

The German doctor was in a spotter aircraft for the rescue charity Sea-Watch when she encountered the Fezzan patrol boat as it picked up migrants in Maltese waters on October 25.

“Get away from Libyan territorial (waters), otherwise we’ll shoot you by SAM (surface-to-air) missiles,” warned the vessel, one of several Italy gave to Libya under a controversial EU-backed deal to stop migrants reaching Europe.

The Libyans brought the migrants onboard before scuttling their rubber boat with incendiary ammunition, according to Sea-Watch footage.

“It happened in just seconds… Their behaviour is highly unpredictable, so you never know what they are going to do next,” she said.

The warning “was threat enough for me to leave the area immediately”, she added.

Despite years of criticism by charities and human rights groups, Italy quietly renewed the accord earlier this month.

Campaigners say nearly 100,000 people have been intercepted by the Libyans since the deal, under which Italy and the EU agreed to train and equip Libya’s coastguard.

The agreement was formed under pressure to manage huge numbers of refugees fleeing to Europe from conflicts in Syria, Iraq and Libya.

It also followed a series of deadly shipwrecks, with a record 5,000 people dying or reported missing in the Mediterranean in 2016.

The European Commission has said the accord aims “to prevent the loss of life in the Mediterranean and at the same time to crack down on migrant smuggling and human trafficking networks”.

Last year, 2,062 were reported dead or missing, according to the International Organisation for Migration (IOM).

Centre for European Reform analyst Luigi Scazzieri said working with other countries to prevent arrivals was a “key emphasis” of European policy.

The Italy-Libya accord has proved “very effective” in reducing the number of arrivals — at least initially.

But charities decry a “Wild West” situation with armed militias posing as the Libyan coastguard and live ammunition used against migrants’ boats in open water.

Critics highlight a lack of accountability, with little public information on who receives the money in Libya.

Meanwhile, many of those intercepted are believed to have ended up in Libyan detention centres.

Save the Children, Doctors Without Borders and Amnesty International say many migrants in Libya are tortured, sexually abused or used as slaves.

“The arrests are carried out according to the rules in place,” a migration official said.

Felix Weiss, spokesperson for the Seabird arm of Sea-Watch, said “the Libyan coastguard is not professional, it needs the EU’s aerial surveillance and guidance to find the migrant boats”.

Human rights lawyer Arturo Salerni told AFP the “pull back” of migrants from European search and rescue areas to Libya was illegal under EU law “if European states are complicit”.

The Italian government did not reply to requests for comment.

Every year, Italy takes in tens of thousands of people who attempt to cross the central Mediterranean, the world’s deadliest migration route.

It had numerous agreements during the 2000s with Libyan dictator Muammar Gaddafi on curbing migratory flows, before he was ousted in 2011.

In 2012, the European Court of Human Rights condemned Italy for intercepting and forcibly returning people to Libya, prompting a new approach.

After the 2017 deal, rescue charities were “told by Italy to alert the Libyan coastguard instead”, according to Chiara Denaro from Alarm Phone, a hotline used by migrants in distress.

The deal quickly attracted criticism, with the UN imposing sanctions for people trafficking on several Libyans in 2018.

He exposed migrants, including minors, to “brutal conditions and sometimes fatal circumstances on land and at sea”, the UN said.

In 2019, Italian newspaper L’Avvenire revealed another known people trafficker, Abd Al Rahman al-Milad was actually present in Sicily at talks with Italian officials on drawing up the 2017 deal.

Milad was suspended from the Libyan coastguard after being added to the UN’s sanctions list in 2018, but remained involved with “rescuing migrants” the following year, according to a UN report cited by L’Avvenire.

That suggested it had returned to Libya and was reused, Sea-Watch said.

The EU has devoted around EUR59 million (RM282 million) to boosting the Libyan coastguard’s operational capacity, including training some 500 members between 2015 and 2020, when it stopped.

There are plans for training to resume but talks are ongoing with the Libyans, “with a substantial focus on human rights and international law”, an EU spokeswoman told AFP.

Italy has earmarked at least EUR32.5 million for missions in support of the Libyan coastguard since 2017, humanitarian organisation Arci said in a report last year.

“It adds insult to injury that the Italian government also refuses disembarkation to those who managed to leave that country,” it said.

Sea-Watch is one of a number of charities that operate rescue ships in the Mediterranean, which have found themselves in the crosshairs of Meloni’s new government.