Voting On 19 November? Here’s A Checklist On What To Do On Election Day 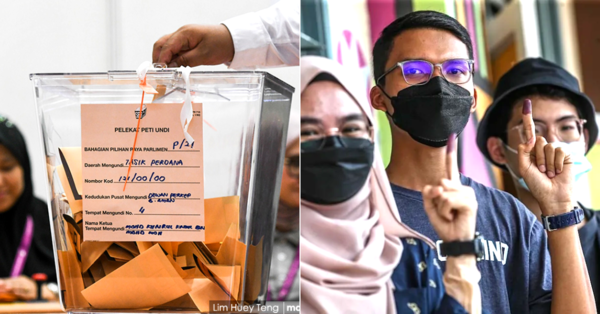 Since Undi 18 came into effect in December 2021, all Malaysian citizens who are 18 years old are eligible to vote in the upcoming General Election (GE15)

As Malaysians, it’s our constitutional right to vote, as it will affect our country’s future. However, if it’s your first time voting, things may be a bit overwhelming for you.

Issues such as the election process, a political party’s manifesto, and what to do on polling day may be on your mind.

Don’t worry, we’ve got you covered! Whether it’s your first time voting or you need a reminder, here are some things you need to know:

Remember to bring your NRIC to your respective voting stations, as the officers will need to verify your identity before allowing you to cast a vote.

Image for illustration purposes only.
Image via MyGovernment

2. If you wanna beat the crowd, it’s best to get up super early in the morning to line up

I know, most of us aren’t morning people. However, which one is better: waking up late and lining up the whole day or waking up early and saving time? Ha, you choose.

Usually, voting stations open at 8am until 5pm, and depending on your location or where you’ll be coming from, it’s best to be there an hour or two prior.

There’s no specific dress code for voting day, but it’s encouraged for everyone to wear proper and decent clothing that does not depict any party’s logo, in case of sensitivities.

Since the officers have the right to deny entry if you wear shorts, skirts, slippers, and singlets, it’s best to avoid them.

4. Do not doodle on your ballot paper and make sure it is not missing a serial number, trademark, and official stamp

Don’t doodle on your ballot paper, as it can cause it to be disqualified. Just put a simple ‘X’ next to the candidate of your choice and submit the vote into the ballot box. However, there are other ways you can mark your ballot paper that are still acceptable.

If you find that there are markings on your ballot paper, call the nearest officer on duty to replace it with a new, unblemished ballot paper.

If you get a ballot paper that lacks one of these three things: serial number, trademark, and official stamp, make sure to swap it for a new, valid one.

5. Phones are not allowed in the voting station

I know, it’s super tempting to commemorate your first time voting with Instagram Stories or a TikTok Live. However, you are not allowed to use your phone inside the voting station and must have it on mute at all times.

Image for illustration purposes only.
Image via Suara Sarawak

6. Do not use nail polish on voting day

Make sure to have clean nails on voting day, especially your left index finger. You will need to dip your finger in the indelible ink before voting inside the station.

Image for illustration purposes only.
Image via Dan Cristian P?dure?/Unsplash

7. Bring an umbrella along

It’s important to bring an umbrella to prepare for any weather changes. You can also check the weather forecast before making your way to the voting station, but it’s best to have an umbrella prepared in case of unpredictable weather.

Image for illustration purposes only.
Image via Bernama/Free Malaysia Today

You should also bring a water bottle to stay hydrated while waiting in line to vote, especially if it takes a while for you to finally cast your ballot.

There are three other things you should be aware of, as they constitute an offence and are punishable by law:

9. Do not accept food and drinks from strangers, as it may be perceived as accepting a bribe

Image for illustration purposes only.
Image via Freethink

10. Do not bring in or take out ballot papers from the voting station

Image for illustration purposes only.
Image via TODAY

11. Do not loiter around the voting station after casting your vote

If you need to wait for a family member or a friend, it’s best to wait in the car or a far distance away from the voting station.

Image for illustration purposes only.
Image via Gempak

In case you missed it, mark your calendar for 19 November:

Still unsure how the election process works in Malaysia? Read this story: