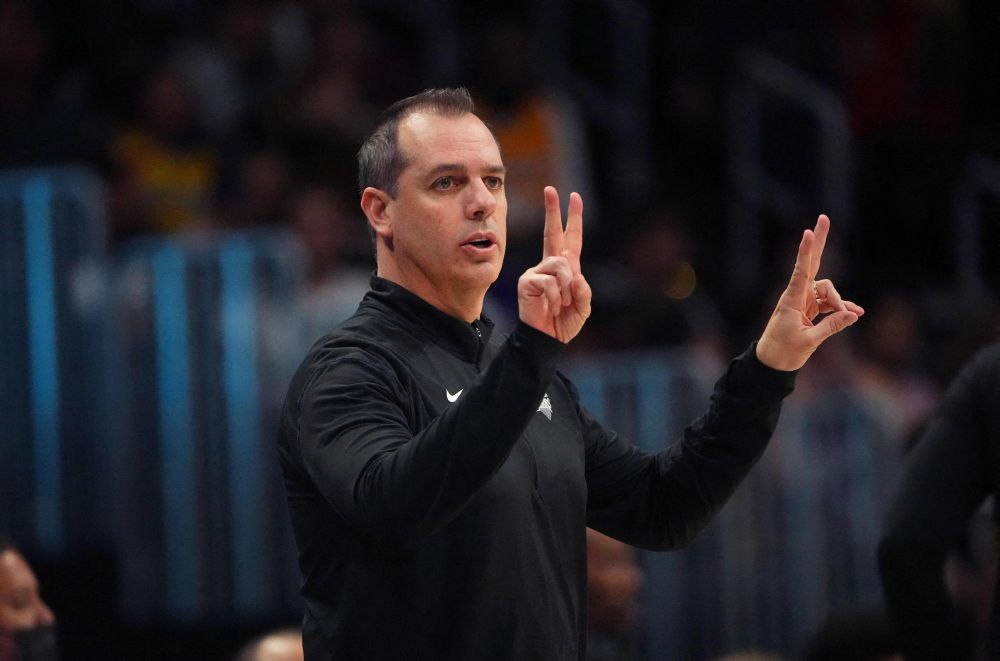 “This is an incredibly difficult decision to make, but one we feel is necessary at this point,” Pelinka said.

Speculation over Vogel’s future intensified after the team’s final regular season game on Sunday, with ESPN reporting that the coach — who led the Lakers to a 17th NBA championship in 2020 — would be fired.

“Frank is a great coach and a good man,” Pelinka added.

“We will forever be grateful to him for his work in guiding us to the 2019-20 NBA championship.”

The announcement came as Lakers players addressed the media in end-of-season interviews.

Lakers superstar LeBron James said before the announcement he had not been aware of the team’s decision concerning Vogel.

James said he had “nothing but respect” for the 48-year-old.

“I respect Frank as a coach, as a man,” James said.

“The partnership that we’ve had over the past few years has been nothing but just candid, great conversations.

“He’s a guy who gives everything to the game. Prepared us every single night with his coaching staff.

“At the end of the day, I don’t know what’s going to happen, but I’ve got nothing but respect for him.”

Vogel bristled when asked about his reported dismissal immediately after the Lakers’ 146-141 overtime win over the Denver Nuggets in their final game of the season on Sunday.

“I haven’t been told shit and I’m going to enjoy tonight’s game, celebrate what these young guys did in terms of scratching and clawing and getting back in this game and getting a W, and we’ll deal with tomorrow, tomorrow,” Vogel told reporters.

The Lakers finished the 2021-2022 campaign in 11th place in the Western Conference, missing out on the postseason with a dismal record of 33 wins and 49 losses.

It is only the fourth time in James’ career that he has failed to reach the playoffs, and the second time it has happened since he joined the Lakers in 2018.

The team had been tipped as championship contenders before the season after acquiring nine-time NBA All-Star Russell Westbrook in a blockbuster trade.

But injuries meant that the Lakers were only able to field their big three of James, Westbrook and Anthony Davis in 21 games during the 82-game season.

James said Monday that the team’s inability to find consistent results had been the most challenging aspect of the season.

“We’d have a huge win at home against a playoff-contending team like Utah — and then go on the road and lose to Houston. That was the mental side, playing with your psyche like ‘What the heck is going on?’

“How can we be so great one night and the next night be so mediocre? That was the most challenging part of the season for sure.”

James meanwhile batted away questions about his future with the Lakers, saying he had not discussed the two-year contract extension he will be eligible to sign in August because of collective bargaining agreement rules.

However he insisted he still wanted to challenge for more NBA titles with the Lakers.

“I came here to win a championship. And I want to win more. So I accomplished what I wanted to accomplish, but I’m still hungry for more,” James said. “I’m confident that this organization wants the same.” — AFP