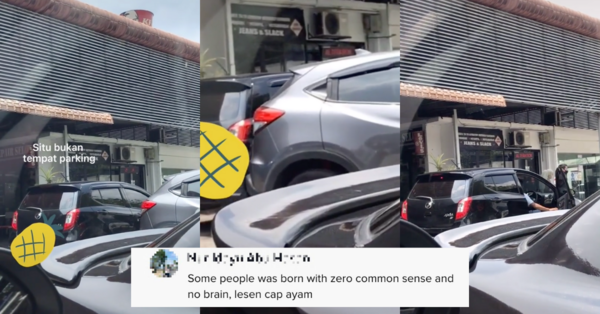 On Wednesday, 15 September, TikTok user @miaayuslix﻿ uploaded a video along with a caption that read, “I don’t know what to say, pity the makcik.”

In another TikTok, she explained that the makcik she was referring to in her caption was the driver of the Honda HRV in her video.

In the clip, a Honda HRV can be seen backing into a Perodua Axia, hitting the car multiple times

In the comments, TikTok users confirmed that the incident took place at Medan Selera Seksyen 2 in Shah Alam, Selangor.

While focusing on the Perodua Axia, @miaayuslix﻿ wrote, “That’s not a parking space.”

She then added, “There are a lot of empty spaces, but that’s where they still decided to park.”

In the end, the owner of the Perodua Axia got into their vehicle and moved their car, allowing the Honda HRV driver to finally exit the parking lot.

Netizens criticised the Perodua Axia driver, saying that he should’ve been more considerate when parking

One person wrote, “If you want to park like this for a while, it’s okay but the driver should stay in the car. If anything, can go forward or back.”

“Brother, next time, look around after you park. Ask yourself, ‘Is my car troubling others or not?’ Next time, okay?”

“Should’ve thought, ‘If I parked like this, can others get out? If they reverse, will they hit my car or not?'” another user commented.

A man once went viral for making ‘bad parking’ cards which are meant to be left on the windshields of Malaysians who just can’t park properly:

Malaysian drivers have been known to be quite unforgiving of people who are not mindful of the way they park: