US journalist shot dead in Ukraine 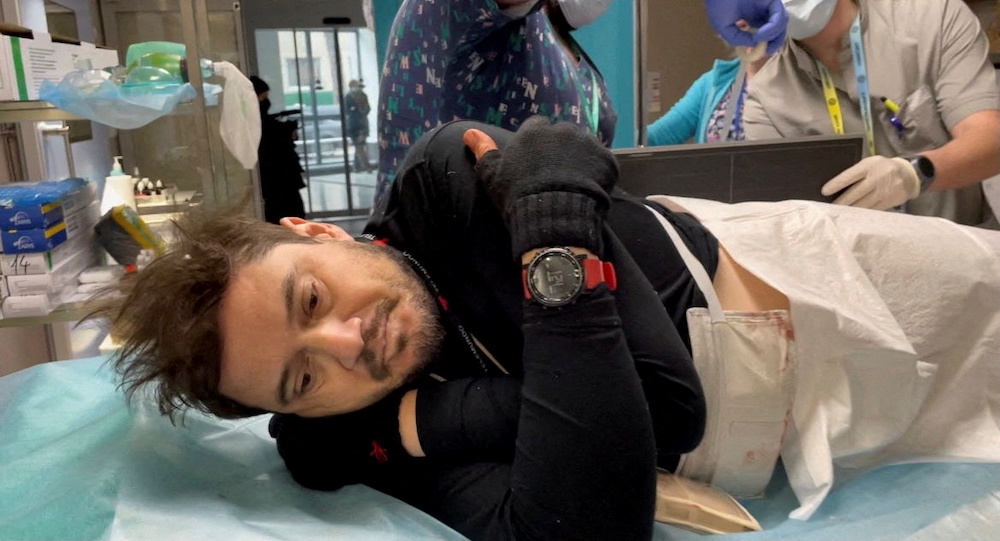 A US journalist receives medical attention after being shot and wounded in the town of Irpin, at a hospital in Kyiv, Ukraine March 12, 2022 in this screen grab obtained from a handout video. — Hospital handout via Reuters

IRPIN, March 14 — A US journalist was shot dead and another wounded on Sunday in Irpin, a frontline suburb of Kyiv that has witnessed some of the fiercest fighting since Russia invaded Ukraine.

“We are devastated by the loss of Brent Renaud,” Time editor in chief Edward Felsenthal said in a statement.

“Our hearts are with all of Brent’s loved ones. It is essential that journalists are able to safely cover this ongoing invasion and humanitarian crisis in Ukraine.”

A New York Times identity card was among Renaud’s papers, leading to earlier reports he worked for the paper.

A third victim, a Ukrainian who had been in the same car as the Americans, was also wounded, according to a medic at the scene.

AFP reporters in Irpin saw Ukrainian volunteer soldiers rush the body on a stretcher to a more secure location before laying it out on the ground for further identification.

Danylo Shapovalov, a surgeon volunteering for the Ukrainian territorial defence, said Renaud died instantly from a gunshot wound to his neck.

Ukrainian officials were quick to blame Russian forces for the shooting, with President Volodymyr Zelensky calling it “a deliberate attack by the Russian military.”

“They knew what they were doing,” Zelensky said.

AFP reporters heard small arms and artillery fire in the area, which runs along the front splitting Ukrainian positions from advancing Russian forces.

“The car was shot at. There were two journalists and one of ours,” Shapovalov told AFP.

“Our guy and the journalist are wounded, I provided them first aid, the other one received a wound in the neck, he died immediately.”

The New York Times called Renaud “a talented photographer and filmmaker” who last contributed to the paper in 2015.

Arredondo said in a news video clip of him in his hospital bed that the reporters’ vehicle came under attack after crossing a Ukrainian-controlled checkpoint.

“We were going to film other refugees leaving. We got into a car, someone offered to take us to the other bridge,” he said.

“We crossed a checkpoint and they started shooting at us, so the driver turned around and they kept shooting.”

Ukrainian officials immediately blamed Russian forces for the attack, which occurred near a bridge leading from Irpin to the flashpoint town of Bucha, now under Russian control.

White House National Security Advisor Jake Sullivan said US officials would consult with Kyiv to determine the circumstances of the attack.

Renaud won Harvard University’s Nieman Fellowship in 2019, which he used to report on a wide range of global stories, including Black Lives Matter protests in his native Little Rock, Arkansas.

His other work included an HBO documentary on heroin addiction and reports on Africa and the Middle East, according to his official Nieman biography.

Renaud becomes the first foreign reporter killed in Ukraine since the Russian assault began on February 24.

A Ukrainian journalist died during a Russian missile strike aimed at Kyiv’s television tower, which killed five people walking in the area on March 1. — AFP