US extends transit mask mandate through May 3 amid Covid uptick 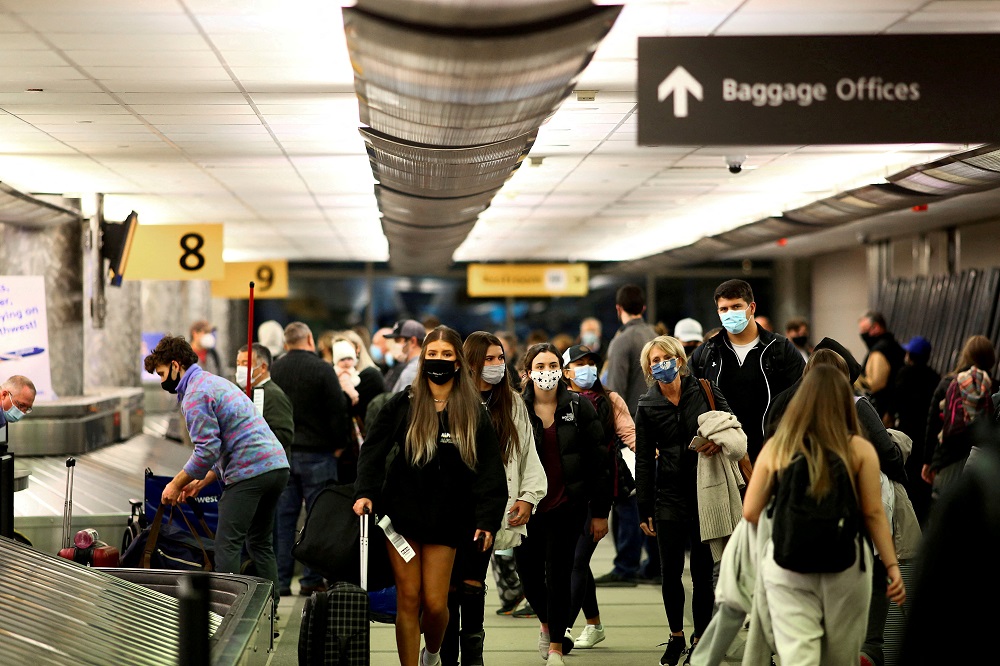 Travellers wearing protective face masks to prevent the spread of the coronavirus disease, reclaim their luggage at the airport in Denver, Colorado November 24, 2020. – Reuters file pic

WASHINGTON, April 14 – US health officials yesterday extended by 15 days a US mandate requiring travellers to wear masks on airplanes, trains and in transit hubs, saying they needed time to assess the impact of a recent rise in Covid-19 cases.

Industry groups and Republican lawmakers want the administration to immediately end the 14-month-old mask mandate. The latest extension would keep the requirements, which had been set to expire April 18, in place through May 3 amid an increase in Covid cases.

The US Centers for Disease Control and Prevention (CDC) first issued a public health order requiring masks in interstate transportation and at transit hubs, including airplanes, mass transit, taxis, ride-share vehicles and trains effective in February 2021. The Transportation Security Administration (TSA) issued a security directive to enforce the CDC order.

The CDC said yesterday the extension was prompted by a rise in cases and to “give it time to assess the potential impact of the rise of cases on severe disease, including hospitalisations and deaths, and healthcare system capacity.”

“So what they’re trying to do is give a little bit more time to assess its potential impact the rise of the cases had on severe disease, including hospitalization and deaths and healthcare system capacity.” She added “at the end of that two weeks they can determine what’s next after that.”

The TSA said yesterday it would extend the order through May 3 after the CDC “continues to monitor the spread of the Omicron Covid-19 variant, especially the BA.2 subvariant that now makes up more than 85 per cent of US cases.”

Both the CDC and TSA mask requirements have been repeatedly extended.

Airlines for America, a trade group, on Wednesday in a letter continued to urge Biden’s administration “to lean into science and research, which clearly support lifting the mask mandate. It makes no sense to require masks on a plane when masks are not recommended in places like restaurants, bars or crowded sports facilities.”

The group said airplane air is among the safest indoor environments “due to the superior ventilation and hospital grade filters.”

Delta Air Lines Chief Executive Officer Ed Bastian told CNBC earlier yesterday it was time to end the mask mandate and that people need to “make their own decisions and take personal accountability for their health onboard our planes.”

The group cited the CDC’s guidance that nearly all Americans live in counties where they can avoid wearing masks indoors. The CDC in February eased its guidance for face coverings.

The US Senate voted 57-40 last month to overturn the public health order requiring masks on airplanes and other forms of public transportation, drawing a veto threat from Biden.

The mask requirements have resulted in friction sometimes on US airplanes. The Federal Aviation Administration said that since January 2021, there have been a record 7,060 unruly passenger incidents reported – and 70 per cent involved masking rules.

Transport Workers Union President John Samuelsen, which represents 65,000 airline workers, said the union respects the CDC mask decision “but we cannot ignore that the mask mandate has driven an unprecedented rise in assaults by unruly passengers against airline workers.”

The administration is also considering lifting requirements that international visitors get a negative Covid-19 test within a day of travel, as many countries have dropped testing requirements, but is not taking any immediate steps. The United States requires foreign air travellers to be vaccinated. – Reuters