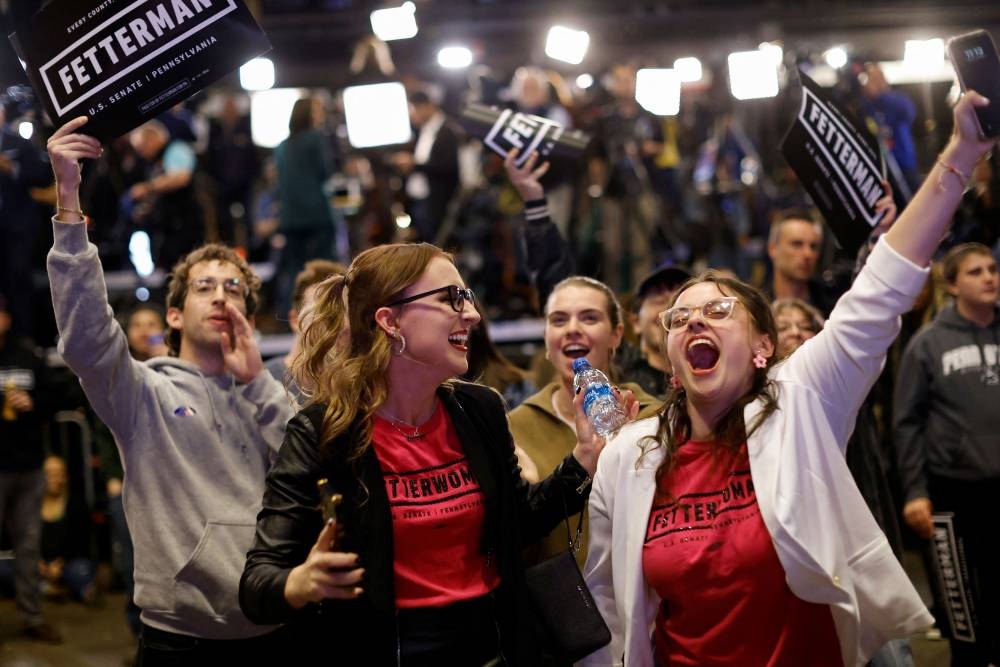 WASHINGTON, Nov 14 — Democrats celebrated Sunday a stunning victory to hold the US Senate, leaving Republicans in disarray and providing a critical base of political and legislative support for the remainder of Joe Biden’s presidency.

Although the fate of the lower House of Representatives is still up in the air, retaining control of the upper chamber in a midterm election many predicted they would lose by a wide margin is, in itself, a major triumph.

“I feel good and I’m looking forward to the next couple years,” said Biden, who was attending a summit of South-east Asian leaders in Cambodia.

The Senate oversees the confirmation of federal judges and cabinet members, and having the 100-seat body in his corner will be a major boon for Biden as he seeks to keep his policy agenda on track.

US midterms traditionally deliver a rejection of the party in the White House, and with inflation surging and Biden’s popularity ratings cratering, Republicans had been expecting to ride a mighty “red wave” and capture both houses of Congress in Tuesday’s vote.

The deciding moment in the battle for control of the Senate came late Saturday, when US networks called the Nevada race for Democratic incumbent Catherine Cortez Masto, giving the party the 50 seats it needs for an effective majority.

Vice President Kamala Harris can cast the tie-breaking vote if the chamber is evenly split 50-50.

One Senate race remains undecided — a runoff in Georgia set for December 6, in which the Democrats could add to their majority.

Senate Majority Leader Chuck Schumer said the result was a vindication of Democrats’ achievements, and a clear rejection of the “anti-democratic, authoritarian, nasty and divisive direction” offered by former president Donald Trump and his loyalists.

Trump was the biggest Republican draw on the midterms campaign trail, and the party’s performance — with many candidates that he personally endorsed losing their high-profile races — was a damaging blow to him.

They include projected losses by Republicans running for secretary of state — the position that oversees a state’s election administration — in several key battlegrounds, in an apparent repudiation of the election denialism embraced by many Trump-endorsed candidates.

Trump is widely expected to declare his 2024 White House bid on Tuesday — an announcement he had planned as a triumphant follow-on to an expected crushing election victory by the party he still dominates.

On Sunday House Speaker Nancy Pelosi toasted her Democrats for their strong performance, noting on CNN how the Republican “red wave” that had been predicted by pundits and the GOP collapsed into “a little tiny trickle.”

Republicans, meanwhile, are left to consider what went wrong, given the fair political winds they had at their backs going into the ballot.

After the Senate result was projected, Republican Senator from Missouri Josh Hawley called for the party to “build something new.”

“The old party is dead. Time to bury it,” he tweeted.

Trump’s response has been to double down on unfounded claims of ballot rigging, posting on his Truth Social platform that the results were a “scam” — and pointing a finger of blame at Senate Republican leader Mitch McConnell.

“He blew the Midterms, and everyone despises him,” said Trump, who has long been at loggerheads with McConnell.

Republicans are slightly favoured to eventually take control of the House of Representatives, but with a far smaller majority than they had envisaged going into Tuesday’s election.

It remains to be seen just how strong an impact the poor Republican performance will have on Trump’s standing in the party — and on his aspirations for a return to the White House.

While there are already senior party voices suggesting the time has come to move away from Trump’s conspiracy-fuelled, hard-right leadership style, the former president still enjoys major grassroots support, and running against him for the presidential nomination would be a formidable task.

One possible challenger, Maryland’s outgoing Republican Governor Larry Hogan, said the party had to switch direction and move on.

“It’s basically the third election in a row that Donald Trump has cost us the race, and it’s like, three strikes and you’re out,” Hogan, a vocal Trump critic, said Sunday on CNN’s State of the Union talk show.

“The definition of insanity is doing the same thing over and over again, expecting a different result.