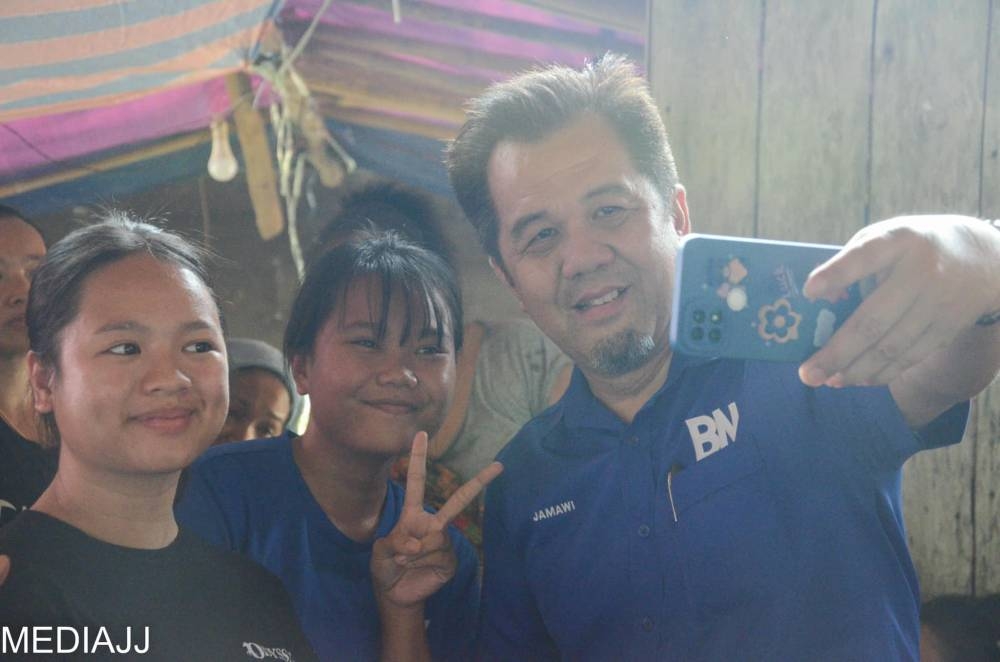 Umno’s Datuk Jamawi Jaafar (right) says he has been working the ground in Tenom longer and harder than his competition, giving him an advantage. — Picture courtesy of Jamawi Jaafar

TENOM, Nov 14 — Umno’s Tenom hopeful Datuk Jamawi Jaafar arguably has the right to feel double-crossed after his former Parti Pribumi Bersatu Malaysia counterpart Riduan Rubin is contesting against him, despite their coalition’s — Barisan Nasional (BN) and Gabungan Rakyat Sabah (GRS) — previous pact to prevent contesting against one another.

Riduan had quit Bersatu to join the contest for the seat as an independent to circumvent any move of breaking ranks, but brickbats have fallen on Riduan’s father Datuk Rubin Balang, who is Bersatu’s Kemabong assemblyman and a political maverick on his own, for masterminding the move.

“Rubin had openly marched with his son during nomination day. It confused all the GRS and BN supporters,” he told Malay Mail.

“Not just that, Rubin, who was the GRS coordinator for Tenom, used the Community Development Leader Unit (UPPM) machinery to help his son’s campaign.”

Both Rubin and Riduan have denied the former’s role in his decision to campaign for the latter, declaring that he had only offered moral support.

After initially being upset, Jamawi seems to have taken a pragmatic approach and is now resigned to the fact that it is a democratic process and says he is back on form.

“Thankfully I have had help from all the other component members — PBS, STAR, PBRS, SAPP, LDP… just not, you know..,” he said, referring to Bersatu as the exception.

“They have been helping the ‘elephant’. They have a history, because he was Bersatu Youth chief,” he said. The elephant is Riduan’s independent candidate symbol.

“But I will work to win, whether or not I get help from the components.”

Jamawi said that he has toured 65 per cent of the constituency so far and will complete the other 35 per cent in the last five days. He is confident of his chances, because of his body of work in the last 25 years on the ground.

When asked about his loss in 2020 in the Melalap state seat to Datuk Peter Anthony, Jamawi said that the sentiment was in Warisan’s favour at the time, and Peter had been with Warisan who was working with DAP.

“The mood for the Chinese was with Warisan and DAP, so I lost the Chinese votes. This time will be different. I saw a lot of Chinese youths at my programmes so I think I can appeal to the new voters,” he said.

He had lost by 1,700 votes in 2020. In Melalap, Chinese voters amount to some 5,400 while Kemabong is a mostly native area of Muruts, Kadazans and Dusuns with 1,200 Chinese. The total number of voters in Tenom now stands at some 42,000, divided almost equally between the two constituencies.

“I’ve been working the ground since I was in Umno Youth, since 1997. I was an agricultural officer then. I’ve also done a lot of NGO work, and I’m with the Lions Club… so I think they know me and what I’ve been doing all this while.

“This is my advantage over the other candidates,” he said.

Riduan, who is cont’esting as an independent, recently joined Parti Kesejahteraan Demokratik Masyarakat (PKDM) and with the extra help, is lately seen to be a front-runner.