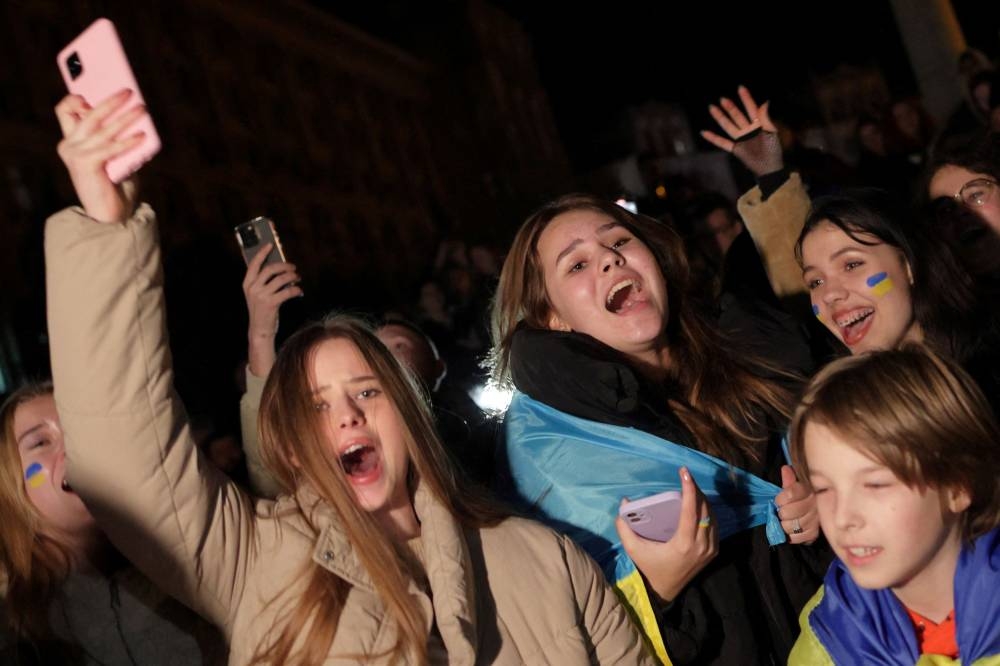 BLAHODATNE (Ukraine), Nov 12 – Jubilant residents welcomed Ukrainian troops arriving in the centre of Kherson yesterday after Russia abandoned the only regional capital it had captured since its invasion began in February.

“Today is a historic day. We are getting the south of the country back, we are getting Kherson back,” Ukrainian President Volodymyr Zelensky said in an evening video address.

“As of now, our defenders are on the outskirts of the city, and we are very close to entering. But special units are already in the city,” he said.

Russia said it had withdrawn 30,000 troops across the Dnipro River without losing a single soldier. But Ukrainians painted a picture of a chaotic retreat, with Russian troops ditching their uniforms, dropping weapons and drowning while trying to flee.

The withdrawal marked the third major Russian retreat of the war and the first to involve yielding such a large occupied city in the face of a major Ukrainian counter-offensive that has retaken parts of the east and south.

Two men hoisted a female soldier on their shoulders and tossed her into the air. Some residents wrapped themselves in Ukrainian flags. One man was weeping with joy.

Ukraine’s defence intelligence agency said Kherson was being restored to Ukrainian control and ordered any remaining Russian troops to surrender to Kyiv’s forces entering the city.

Locals had placed Ukrainian flags in the square as news of the end of more than eight months of occupation filtered out.

Zelensky said measures to make Kherson safe – in particular, removing what he called a large number of landmines – would start as soon as possible.

Dmitry Rogozin, a senior Russian official giving military advice to two occupied regions of Ukraine that Moscow claims as its own, said on Friday that the withdrawal across the Dnipro was painful but necessary, RIA news agency said, and suggested Moscow could regroup and launch another offensive.

“We must carry out this task, hoping that when we gather our strength, when new weapons arrive, when well-trained mobilized units arrive, when volunteers arrive, we will rally and take back this land,” the agency cited him as saying.

As Ukrainian forces surged forward during one of the most humiliating Russian retreats of the war, villagers came out of hiding and, amid tears of relief and joy, described how Russian troops had killed residents and looted homes.

Reuters could not independently verify the accounts and Russia’s defence ministry did not immediately respond to questions about allegations made by residents of the recaptured village of Blahodatne, 20 km (12 miles) north of Kherson.

Serhii Kalko, 43, one of roughly 60 people who stayed in Blahodatne out of a pre-war population of 1,000, was struck by how quiet the final Russian retreat had been. “They left silently. They didn’t even speak with each other,” he said.

Previously, “there was shooting all the time from three directions,” said a tearful but ecstatic Halyna, a diminutive 81-year-old woman standing beside her rusty bicycle.

A number of Russian soldiers had drowned in the Dnipro river trying to escape and others had changed into civilian clothing, a Kherson official said, advising residents not to leave their homes while searches for remaining Russian troops took place.

Natalia Humeniuk, a spokesperson for the Ukrainian military’s southern command, said “saboteur operations cannot be ruled out” by Russian troops in civilian clothes.

Earlier, the Russian defence ministry said it had finished its withdrawal from the western bank of the Dnipro river, where Kherson city lies, two days after Moscow announced the retreat.

No military equipment or weapons had been left on the western bank, the ministry said. All servicemen crossed to the eastern bank, it said.

Ukrainian social media brimmed with celebratory messages and elation. Businesses and official institutions, from national mail carrier Ukrposhta to the anti-corruption office, inserted images of watermelons into their profiles. The Kherson region is known for its watermelons.

There was no sign of Russian forces when Reuters reached Blahodatne. Villagers recounted life under occupation, saying about 100 Russians had held Blahodatne for eight months.

The Russians had killed a man who had approached too close to their trenches and taken away two other men and a young woman whose fate remained unknown, the villagers said.

“For the first two months they came in and were extremely aggressive,” said villager Kalko, adding that Russian soldiers fired in the air as they walked down the streets.

The Russian troops had also broken into vacant homes and looted them, removing furniture, televisions, stoves and refrigerators, the villagers said.

Russian forces were driven from the outskirts of the capital Kyiv in March and ousted from the northeastern region of Kharkiv in September as Ukraine’s counter-offensive gained momentum.

Kherson province is one of four regions Russian President Vladimir Putin claimed to have annexed from Ukraine in late September. It is also strategically important as the land gateway to Crimea, the peninsula annexed by Russia from Ukraine in 2014 and where Moscow’s Black Sea fleet is based.

Putin’s spokesman Dmitry Peskov said the decision to retreat from Kherson was taken by the defence ministry. Asked by reporters if it was humiliating for Putin, Peskov said: “No.” – Reuters