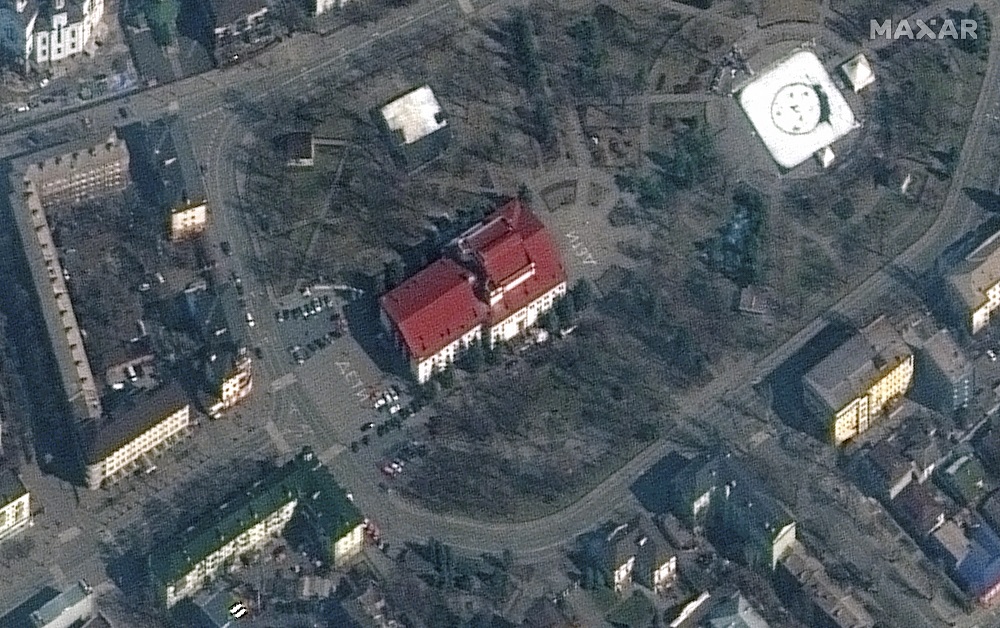 A satellite image shows a closer view of Mariupol Drama Theatre before bombing, as a word ‘children’ in Russian is written in large white letters on the pavement in front of and behind the building, in Mariupol, Ukraine March 14, 2022. – Handout via Reuters

KYIV, March 17 – Ukraine claimed today that Russia had destroyed a theatre harbouring more than a thousand people in the besieged southern port city of Mariupol, with the toll as yet unknown.

Officials posted images that appeared to show the once gleaming whitewashed three-storey theatre hollowed out and ablaze, with bricks and scaffolding piled high.

“The invaders destroyed the Drama Theatre. A place where more than a thousand people found refuge. We will never forgive this,” the Mariupol City Council said in a Telegram post.

Days before the apparent attack satellite images – shared by private company Maxar – clearly showed the words “DETI” – or children in Russian – etched out in the ground on either side of the building.

“People were hiding there. And some said they were lucky to survive, but unfortunately not all were lucky,” he said in a video message.

“The only word to describe what has happened today is genocide, genocide of our nation, our Ukrainian people. But I am confident that the day will come when our beautiful city of Mariupol will rise out of the ruins again.”

The city is a key strategic target for Moscow, potentially linking Russian forces in Crimea to the west and the Donbas to the east and cutting off Ukrainian access to the Sea of Azov.

For days Russian forces have bombarded the city – which once had about half a million residents – cutting power, food and water supplies.

“It is impossible to find words to describe the level of cynicism and cruelty, with which Russian invaders are destroying peaceful residents of a Ukrainian city by the sea,” an official statement read.

Mykhailo Podolyak, an advisor to President Volodymyr Zelensky, decried Russia’s “cruelty” and ridiculed those in the West rejecting the idea of a no-fly zone for “fear of WW3” with Russia, as they sit “in a Berlin cafe.”

Russia’s defence ministry denied that its forces bombed the city and stated the building was destroyed in an explosion set off by Ukraine’s nationalist Azov battalion.

It claimed “peaceful civilians could be held hostage” at the site.

Moscow has already blamed the military unit for last week’s bombing of a maternity hospital in Mariupol, which sparked an international outcry.

“Until we know more, we cannot rule out the possibility of a Ukrainian military target in the area of the theater, but we do know that the theatre had been housing at least 500 civilians,” said Belkis Wille, of Human Rights Watch.

“This raises serious concerns about what the intended target was.”

More than 2,000 people have been killed in the besieged city, according to Ukrainian authorities.

Residents fleeing the city have spoken of bodies left to rot on the streets, and of navigating minefields and Russian airstrikes in their escape.

Russian forces on Wednesday targeted a railway station in the southern Ukraine city of Zaporizhzhia, where thousands of refugees from Mariupol were trying to move further away from the fighting. – AFP