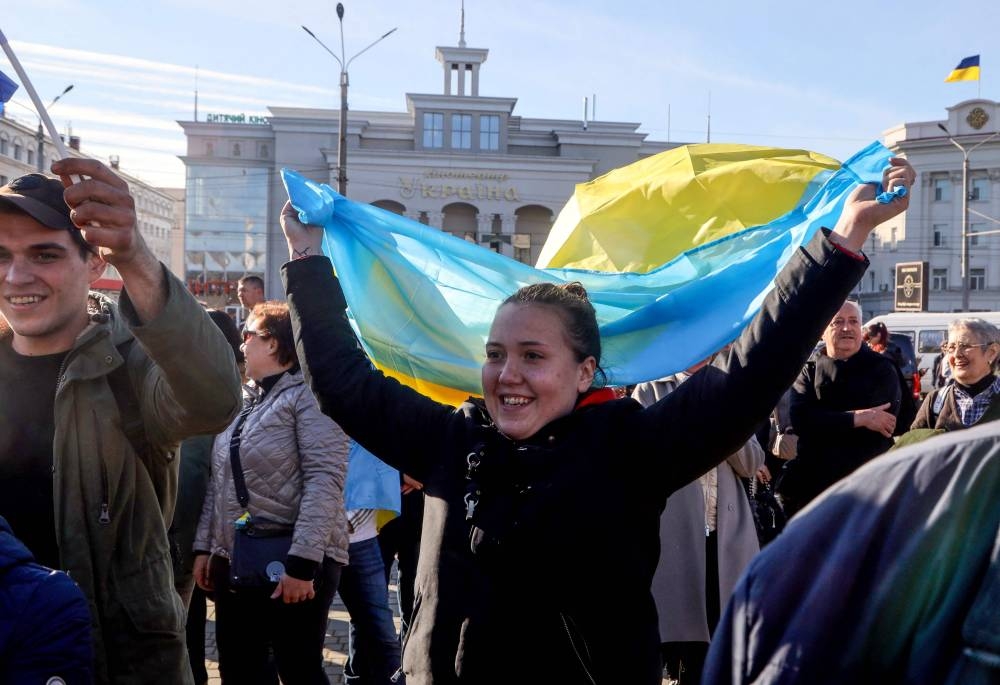 A woman waves a Ukrainian flag in the centre of the recently recaptured city of Kherson November 14, 2022. — AFP pic

KHERSON (Ukraine), Nov 15 — President Volodymyr Zelensky yesterday said Ukraine’s recapture of Kherson marked “the beginning of the end of the war” as he hailed the liberation of the city in a surprise visit.

Nato secretary general Jens Stoltenberg nonetheless cautioned that Ukraine was facing difficult months ahead and said that Russia’s military capability should not be underestimated.

And US President Joe Biden and his Chinese counterpart Xi Jinping — a key ally of Vladimir Putin — agreed in talks yesterday that nuclear weapons should never be used, including in Ukraine.

The Ukrainian presidency distributed images of Zelensky singing the national anthem with his hand over his chest as the country’s blue and yellow flag was hoisted next to Kherson’s main administrative building.

“This is the beginning of the end of the war,” Zelensky said.

“It is a long way, difficult way, because the war took the best heroes of our country. We are ready for peace but our peace, for our country it’s all our country, all our territory,” he added.

Russian President Vladimir Putin’s spokesman denied that the Ukrainian leader’s visit had any impact on the status of the Kherson region, which Moscow formally annexed last month.

In Kherson, Zelensky said that “the price of this war is high”.

“People are injured. A large number of dead. There were fierce battles, and the result is — today we are in Kherson region.”

His visit came just days after Ukrainian troops entered the city — the Kherson region’s administrative centre — after Russia pulled back its forces on Friday.

The takeover is the latest in a string of setbacks for the Kremlin, which invaded Ukraine on February 24 hoping for a lightning takeover that would topple the government in days.

Still, Stoltenberg said that “the coming months will be difficult” and cautioned that: “We should not make the mistake of underestimating Russia”.

“Putin’s aim is to leave Ukraine cold and dark this winter,” he told a press conference in The Hague.

Russia has repeatedly targeted Ukrainian infrastructure, and the country’s national energy company said Moscow’s forces destroyed a key energy facility before retreating from the western bank of the Dnipro river.

A senior US military official also told journalists that initial indications are that Russian forces caused “significant damage to civilian infrastructure,” including “water and utility systems”, prior to their departure.

The city of Kherson was the first major urban hub to fall to Russian forces and the only regional capital seized by Moscow’s troops.

Its recapture opens a gateway for Ukraine to the entire Kherson region, one of four that the Kremlin announced in September were annexed and part of Russia.

Putin vowed to use all available means to defend them from Ukrainian forces, hinting at the use of nuclear weapons.

Biden and Xi agreed in talks at the G20 however that nuclear weapons should never be used, including in Ukraine, the White House said.

“President Biden and President Xi reiterated their agreement that a nuclear war should never be fought and can never be won and underscored their opposition to the use or threat of use of nuclear weapons in Ukraine,” it said in a statement.

US Central Intelligence Agency Director William Burns meanwhile held talks with his Russian counterpart in Ankara to warn him about the consequences of using nuclear weapons.

A self-described partisan in Kherson told AFP after the Russian withdrawal that he and his friends had spent months walking the streets observing the Russians’ every move.

Ukraine’s forces could then use the coordinates to target strikes during a counteroffensive that has seen Russia cede roughly half the land it seized in the first weeks of war.

“I was scared,” the imposing but soft-spoken guitarist Volodymyr Timor said of the prospect of being caught and possibly killed.

Fuelling concerns that Moscow may have a lingering presence in Kherson, Ukrainian intelligence services said they had detained a Russian military serviceman dressed in civilian clothes.

It said his task was “to gather information, adjust fire on the Ukrainian armed forces and carry out sabotage.”

The senior US military official said it is possible Moscow still has a “small number” of troops on the western side of the Dnipro.

Elsewhere, Ukraine’s forces had retaken 12 towns and villages in the eastern region of Lugansk, the military and local officials said yesterday.

The eastern industrial region has been held by Russian-supported separatists since 2014 but Kyiv’s forces have slowly been clawing back territory there.

But Russia’s military also said its forces were making gains in the neighbouring region of Donetsk, capturing the village of Pavlivka, where fighting had caused controversy in Russia. — AFP