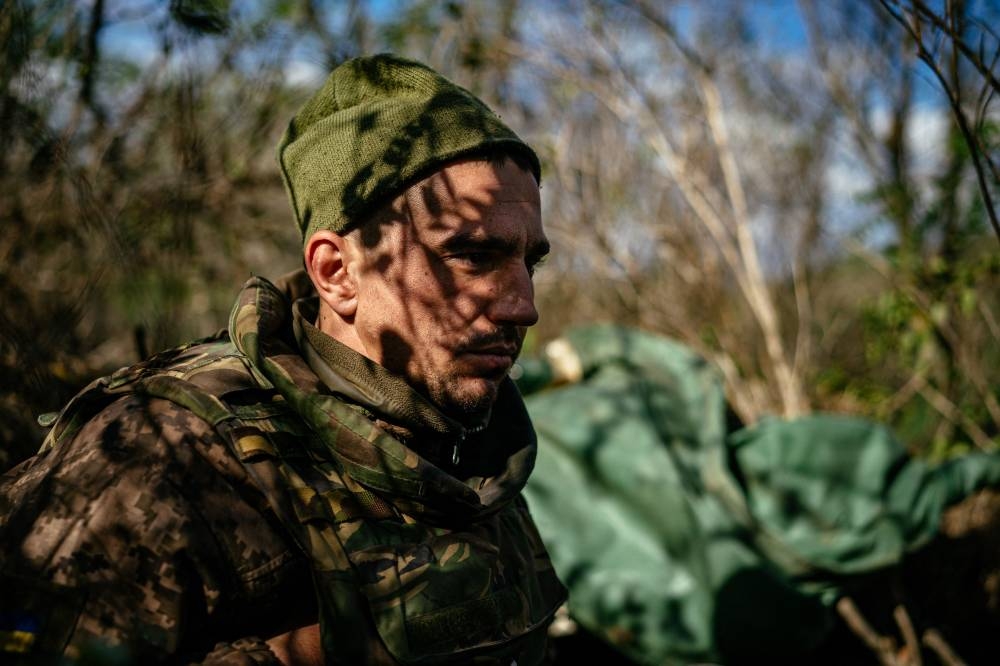 Ukrainian soldier Viktor, 35, checks his heavy machine gun at a position along the front line in the Mykolaiv region on October 5, 2022, amid the Russian invasion of Ukraine. — AFP pic

KYIV, Oct 6 — They lived for months in fox holes, pounded by Russian artillery, on a frontline frozen in stalemate. But with a counter-offensive reaping results in the south, Ukrainian soldiers were eyeing “light at the end of the tunnel”.

Leonid, Viktor, Bogdan and Yaroslav, all originally from north-western Ukraine, joined the army after the Russian invasion was launched in February.

Since the summer the four men have been posted on a second line of defence, four kilometres from Russian forces, in case a first Ukrainian line is breached.

Similar units are scattered along the frontline, according to a military press attache who accompanied AFP yesterday.

The troops’ daily lives consists mostly of waiting. At the bottom of a hole, just wide enough for a man, a rocket launcher sits upright against a dirt wall.

Bottles of mosquito repellent left nearby testify to the inconvenience that nature inflicts on soldiers.

A few metres further, a machine gun is covered with a camouflage net, in front of cartridge cases.

Another hole, measuring just a few square meters, covered with logs, plastic and branches, can accommodate two soldiers for the night.

On a front characterised by heavy artillery duels, the four infantry soldiers listen to shells explode, sometimes in the distance, sometimes close by, knowing that there is little they can do if a shell hits their position.

Ukrainian soldier Bogdan, 29, stands at a position along the front line in the Mykolaiv region on October 5, 2022, amid the Russian invasion of Ukraine. — AFP pic

“For two hours there has been no bombardment… But usually they are constant,” said Bogdan, 29, a worker who enlisted in 2014 in the Ukrainian army, before returning to civilian life — until this year.

“When you see a shell explode ten or fifteen metres from you, it’s scary. We’re all human and we’re all scared,” said the father-of-two.

“The earth trembles even when our side fires, and even more when they are the ones who bombard,” he said.

But despite the harshness of everyday life, “now it’s better”, according to Bogdan.

“We see that our comrades, our ‘horde’ as we call them, are working. We see their successes and it inspires us. If some thought before that we weren’t moving fast enough, well now that’s not the case!” he said.

Kyiv announced its counter-offensive in the south at the end of August, with the primary objective of retaking Kherson, a city of 280,000 inhabitants before the war, and capital of the eponymous region, that neighbours Mykolaiv.

But after regaining a few villages and hamlets in the first two weeks, the advance stalled, unlike another counter-offensive in the Kharkiv region that saw Kyiv recapture large swathes of territory.

Now, in the last five days, the southern counter-offensive has been quickly catching up.

On Tuesday, Ukraine President Volodymyr Zelensky spoke of “rapid and powerful” progress, citing eight recaptured localities in the Kherson region, which was confirmed by maps presented the same day by the Russian Ministry of Defence.

Yesterday, the Ukrainian president claimed the “liberation” of three new villages in the area.

In a daily note today, the US-based Institute for the Study of War said that Kyiv made “major gains” in the past 48 hours in the north of the Kherson region.

After four months of battle, Kyiv’s troops also re-took Davydiv Brid, a strategic village located on a river, about ten kilometres from the trenches visited yesterday by AFP.

“The mood of the boys has changed. It has become much better,” said their commander Yaroslav, a sturdy 39-year-old man wearing a black cap.

“There is light at the end of the tunnel,” he said.

Behind Davydiv Brid, there remains only a vast plain on which the “orcs” — a derogatory term used by Ukrainians for Russian soldiers — will have “nowhere to hide”, he said.

According to Yaroslav, 400-800 Russian soldiers recently arrived as reinforcements in their area after the mobilisation decreed by Moscow last month.

“No matter the amount of cannon fodder, if we split their ranks, they will run away,” said Leonid, 46, giving a thumbs up sign.

To recapture Kherson, “we will have to kill them. There is no other solution,” he said. — AFP