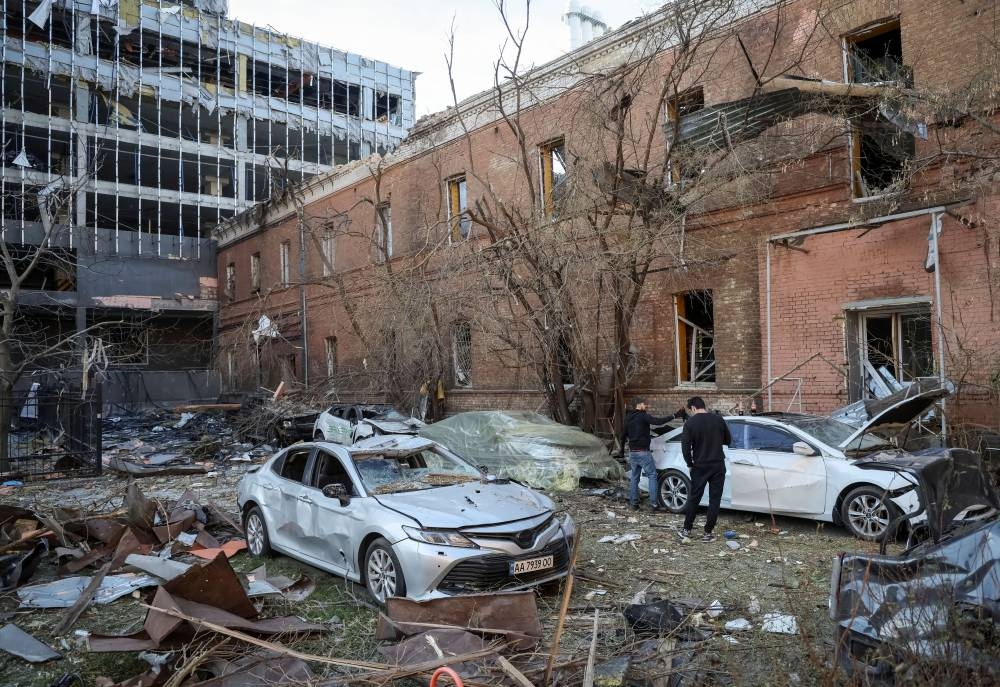 KYIV, Oct 12 – Ukrainian President Volodymyr Zelensky said that he expects a positive response today from Western allies in Brussels to his requests for a rapid increase in military aid as the country’s cities faced more Russian missile strikes.

After intense Russian missile attacks, Zelensky appealed to the leaders of the Group of Seven nations yesterday for more air defence capabilities as the G7 vowed to support Kyiv for “as long as it takes.”

A US-led coalition of some 50 countries known as the Ukraine Defence Contact Group will meet in Brussels on Wednesday on the sidelines of a Nato defence ministers meeting.

“I am anticipating from our partners progress on matters of anti-aircraft and anti-missile defences and agreements on new supplies of different weapons and ammunition vital for us,” Zelensky said in an evening address yesterday.

The Ukrainian military, which has recaptured significant territory from Russian forces in the past month, said on Tuesday night that Russian missile strikes had damaged more than 10 cities, including Lviv, Bakhmut, Avdiivka and Zaporizhzhia. Air raid sirens wailed earlier across the country for a second day.

“Over the past 24 hours, the occupiers have again resorted to mass missile strikes — more than 30 cruise missiles, seven air strikes and 25 instances of shelling,” Ukraine’s armed forces said.

The Ukrainian command said its forces killed more than 100 Russian troops in the southern Kherson region. Reuters could not independently verify the battlefield reports.

The activity yesterday was less intense than the day before when dozens of strikes killed 19 people, wounded more than 100 and knocked out power across the country in Moscow’s biggest aerial offensive since the start of its invasion on February 24.

More missile strikes yesterday killed seven people in the southeastern Ukrainian town of Zaporizhzhia, a presidential aide said, and left part of the western city of Lviv without power, according to local officials.

“HIMARS time,” he wrote on Twitter, was a “good time for Ukrainians and bad time for the occupiers.”

Ukraine yesterday received the first of four IRIS-T air defence systems Germany promised to supply, a German defence ministry source said. The United States said it was speeding up the shipment of sophisticated NASAMS air defences to Ukraine. Washington has already provided more than US$16.8 billion worth of security aid to Ukraine during the war.

The G7 – which groups the United States, Germany, France, Japan, Britain, Italy and Canada – pledged continued “financial, humanitarian, military, diplomatic and legal support…for as long as it takes” to Ukraine, it said in a statement.

It also condemned “indiscriminate attacks on innocent civilian populations” as war crimes and said Russian President Vladimir Putin would be held to account for them.

Putin is a “rational actor who has miscalculated significantly,” US President Joe Biden said in a CNN interview.

Moscow, which calls its actions in Ukraine a “special military operation” to eliminate dangerous nationalists and protect Russian speakers, has accused the West of escalating and prolonging the conflict by supporting Kyiv.

“We warn and hope that they realise the danger of uncontrolled escalation in Washington and other Western capitals,” Russian Deputy Foreign Minister Sergei Ryabkov was quoted as saying by RIA news agency yesterday.

Kyiv and its Western backers accuse Russia of an unprovoked land grab in Ukraine.

Russian Foreign Minister Sergei Lavrov said Moscow was open to talks with the West, a claim Washington dismissed as “posturing” because Russia has continued to strike Ukrainian cities.

In an interview on state television, Lavrov said Russia was willing to engage with the United States or with Turkey on ways to end the war, now in its eight month, but had yet to receive any serious proposal to negotiate. Zelensky yesterday again ruled out peace talks with Putin.

The Russian president, under domestic pressure to ramp up the war as his forces have lost ground since early September, said he ordered Monday’s strikes as a response to an explosion that damaged Russia’s bridge to annexed Crimea last weekend.

Ukrainian authorities said yesterday they exhumed the bodies of dozens of people, including civilians and a one-year-old baby, following the retreat of Russian troops from two towns in the eastern Donetsk region.

In recent weeks, Moscow has annexed new tracts of Ukraine, mobilised hundreds of thousands of Russians to fight and repeatedly threatened to use nuclear arms, stoking alarm in the West. A European diplomat said Nato was considering convening a virtual summit of the alliance to consider its response.