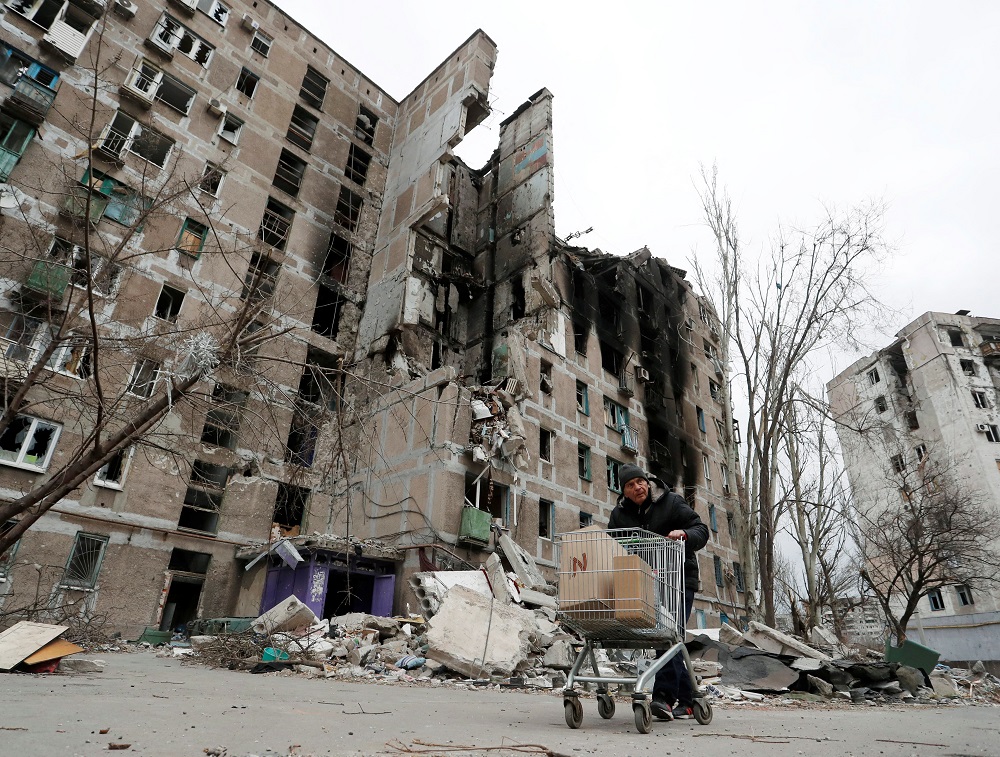 A local resident pushes a cart with humanitarian aid past an apartment building damaged during Ukraine-Russia conflict in the southern port city of Mariupol, Ukraine April 4, 2022. – Reuters pic

KYIV, April 12 – Ukraine yesterday said tens of thousands of people have likely been killed in Russia’s assault on the southeastern city of Mariupol while the country’s rights ombudswoman accused Russian forces in the region of torture and executions.

Reuters has confirmed widespread destruction in Mariupol but could not verify the alleged crimes or the estimate of those killed in the strategic city, which lies between Russian-annexed Crimea and eastern areas of Ukraine held by Russian-backed separatists.

“Mariupol has been destroyed, there are tens of thousands of dead, but even despite this, the Russians are not stopping their offensive,” President Volodymyr Zelenskiy said in a video address to South Korean lawmakers without providing more details.

If confirmed, it would be by far the largest number of dead so far reported in one place in Ukraine, where cities, towns and villages have come under relentless bombardment and bodies, including civilians, have been seen in the streets.

The head of the Russia-backed self-proclaimed Donetsk People’s Republic, Denis Pushilin, told Russia’s RIA news agency on Monday that more than 5,000 people may have been killed in Mariupol. He said Ukrainian forces were responsible.

The numbers of people leaving the city had fallen because Russian forces had slowed pre-departure checks, Petro Andryushchenko, an aide to the mayor of Mariupol, said on Monday on the Telegram messaging service.

Around 10,000 people were awaiting screening by Russian forces, he said. Russia does not allow military personnel to leave with civilian evacuees. There was no immediate comment from Moscow, which has previously blamed Ukraine for blocking evacuations.

Citing figures from Mariupol’s city administration, Ukraine’s human rights ombudswoman Lyudmyla Denisova said 33,000 residents of Mariupol had been deported to Russia or territories held by Russian-backed separatists in eastern Ukraine. Russia said on Sunday it had “evacuated” 723,000 people from Ukraine since the start of what it called its “special operation.” Moscow denies attacking civilians.

“Witnesses report that Russian national guard troops and ‘Kadyrovite’ (Chechen) units are making illegal arrests, torturing detainees and executing them for any pro-Ukrainian stance,” in Mariupol, Denisova said in a post on Telegram.

The Russian government did not immediately respond to a request for comment on the torture allegations.

“These people are not allowed to move around freely, or to have free access to communication platforms in order to contact their relatives in Ukraine,” he said, without citing direct evidence.

Ukraine’s Deputy Prime Minister Iryna Vereshchuk told Reuters that the number of checkpoints along the Russian-controlled corridor between Mariupol to the Ukrainian city of Zaporizhzhia had grown from three to 15.

Mariupol was among nine humanitarian corridors agreed with Russia on Monday to evacuate people from besieged eastern regions, but its corridor was for private cars only, Vereshchuk said on Telegram.

It was not possible to agree the provision of buses, she said.

Ukraine says Russian forces are massing for a new offensive on eastern areas, including Mariupol, where people have been without water, food and energy supplies for weeks. – Reuters