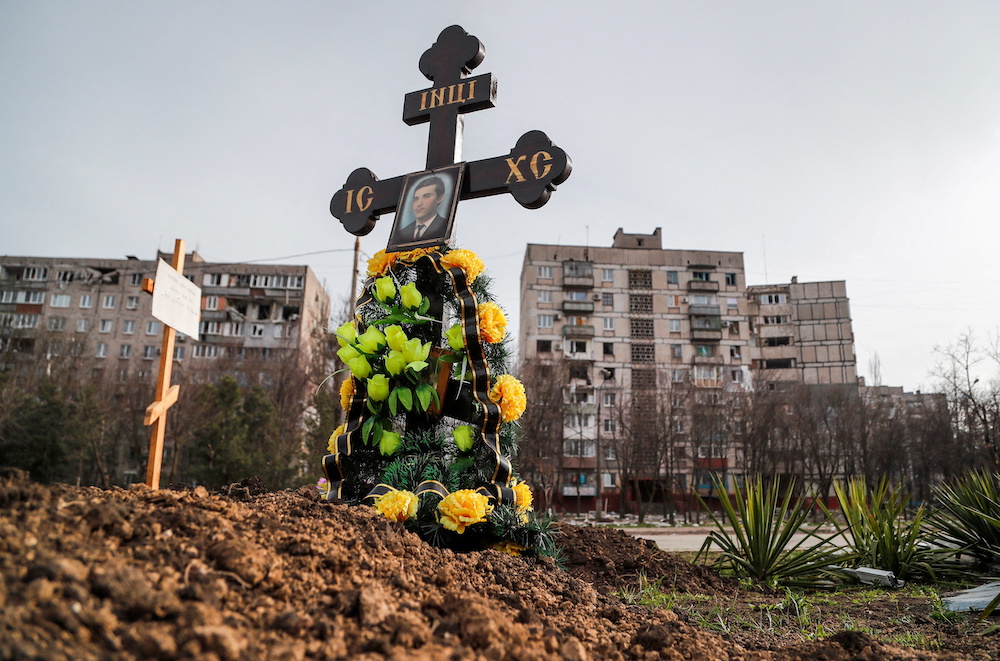 Graves of civilians killed during Ukraine-Russia conflict are seen next to apartment buildings in the southern port city of Mariupol, Ukraine April 10, 2022. — Reuters pic

KRAMATORSK, April 11 — Ukraine said Sunday it had found more than 1,200 bodies in the Kyiv region, the scene of atrocities allegedly committed during the Russian occupation last month, as residents in the country’s east braced — or fled — ahead of an expected massive offensive.

Heavy bombardments hammered Ukraine through the weekend, adding to mounting casualties six weeks into Russia’s invasion of its neighbour.

Shelling claimed two lives in northeast Kharkiv, Ukraine’s second largest city, on Sunday morning, regional governor Oleg Sinegoubov said, the day after 10 civilians, including a child, died in bombing southeast of the city, according to authorities.

“The Russian army continues to wage war on civilians due to a lack of victories at the front,” Sinegoubov said on Telegram.

In Dnipro, a large industrial city of a million inhabitants, a rain of Russian missiles nearly destroyed the local airport, causing an uncertain number of casualties, local authorities said. It had already been struck on March 15.

President Volodymyr Zelensky again condemned atrocities against civilians, and after speaking with German Chancellor Olaf Scholz said they had agreed “that all perpetrators of war crimes must be identified and punished”.

And White House National Security Advisor Jake Sullivan pledged the US would “work with the international community to make sure there’s accountability” for what he called “mass atrocities”.

At the Vatican, Pope Francis called for an Easter ceasefire to pave the way for peace, denouncing a war where “defenceless civilians” suffered “heinous massacres and atrocious cruelty”.

The death toll rose as well in the east of Ukraine, where a missile strike on Friday killed 57 people at a railway station in the city of Kramatorsk, according to a revised tally issued by Pavlo Kyrylenko, the governor of Donetsk region.

Residents in the east have been fleeing in their thousands as Ukraine prepares for “important battles” against Moscow’s forces, Zelensky said.

“We see the preparations for important battles, some people say decisive ones, in the east,” he said on Saturday at a press conference with visiting Austrian Chancellor Karl Nehammer.

“We are ready to fight and to look in parallel to end this war through diplomacy.”

Launching his own diplomatic initiative, Nehammer said he would meet Putin on Monday in a move his spokesman insisted was coordinated with “Berlin, Brussels and… Zelensky”. Austria is a member of the European Union, but not of Nato.

Nehammer will be the first European leader to visit the Kremlin since the invasion began on February 24.

Ukraine’s prosecutor Venediktova said 1,222 bodies had been found in the region around Kyiv alone so far.

At least two corpses were found inside a manhole at a petrol station on a motorway outside Kyiv on Sunday, an AFP reporter saw.

The bodies appeared to be wearing a mix of civilian and military clothing.

A distraught woman peered into the manhole before breaking down, clawing at the earth and wailing, “My son, my son”.

The war is taking a heavy toll on the region’s economy as well. The World Bank on Sunday issued a dire forecast, saying Ukraine’s economy would collapse by 45.1 per cent this year — a much bleaker outlook than it predicted even a month ago — while Russia would see an 11.2 per cent decline in GDP.

Ukraine on Sunday blamed Kremlin propaganda, with the complicity of the Russian media, for laying the groundwork for the bloody campaign.

“For many years, Russian political elites and propaganda have been inciting hatred, dehumanising Ukrainians, nurturing Russian superiority and laying ground for these atrocities,” Foreign Minister Dmytro Kuleba tweeted on Sunday.

But in an interview with NBC’s Meet the Press, Kuleba said he remained open to negotiating with the Russians.

“If sitting down with the Russians will help me to prevent at least one massacre like in Bucha, or at least another attack like in Kramatorsk, I have to take that opportunity,” he said.

Bucha — where authorities say hundreds were killed, some with their hands bound — has become a byword for the brutality allegedly inflicted under Russian occupation.

The comments came on the heels of a surprise visit to Kyiv on Saturday by British Prime Minister Boris Johnson.

Hailing the country’s response to the Russian invasion, Johnson offered Ukraine armoured vehicles and anti-ship missiles, crucial to halting the Russian naval siege of Black Sea ports, to help ensure that the country will “never be invaded again”.

In a bid to shore up international resolve against Moscow, US President Joe Biden is to hold virtual talks on Monday with Indian Prime Minister Narendra Modi, just weeks after saying India had been “shaky” in its response to the invasion.

A US spokeswoman said the two leaders would consult on ways to offset the “destabilising impact (of the war) on global food supply and commodity markets”.

At the same time, EU foreign ministers are to meet Monday to discuss a sixth round of sanctions, even as divisions over a ban on Russia gas and oil imports threaten to blunt their impact.

In further Russian strikes, the airport in Dnipro between central and eastern Ukraine, was hit hard.

An AFP reporter saw black smoke in the sky above the facility, but a plane also took off later on Sunday, suggesting its runway was still functioning.

As Russian forces regroup in the east and south of Ukraine, local officials are urging residents to flee before it is too late.

Lugansk governor Sergiy Gaiday said in a new video that civilians were afraid to flee the region after the tragedy in Kramatorsk.

“Unfortunately, sometimes we just beg (them) to come out of hiding because we know what comes next…” Russian forces, he said, “will destroy everything in their path”.

A Russian defence ministry statement, meanwhile, said the Kyiv authorities and their western allies were continuing to stage “monstrous and merciless” provocations and murder civilians in the self-proclaimed Lugansk People’s Republic in the southeast. — AFP