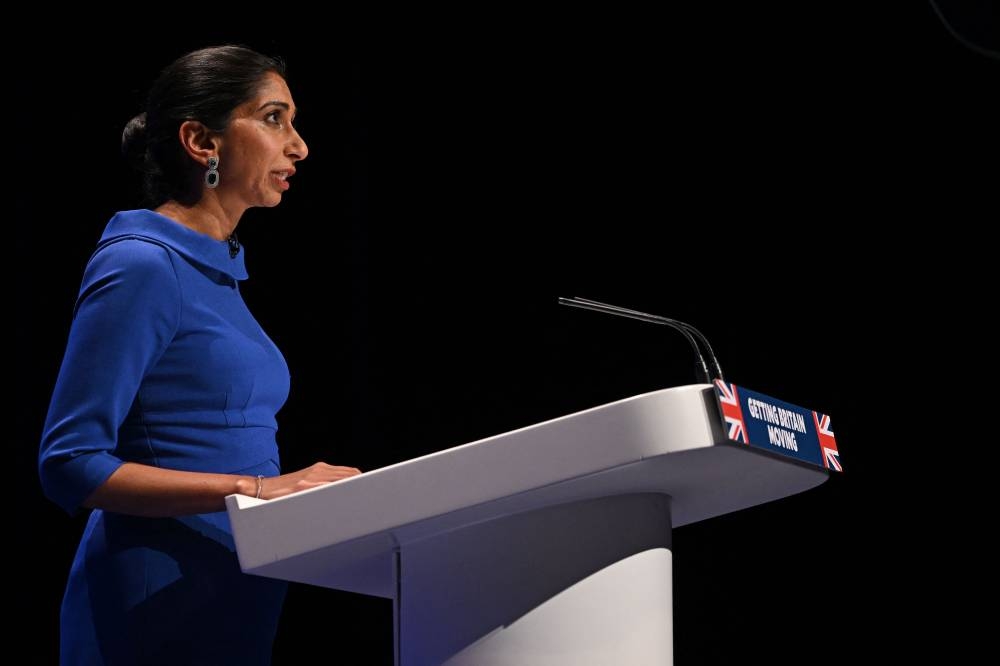 LONDON, Oct 6 — Accusing asylum seekers of “abusing the system” and urging the need to “take back control”, the UK government is once again talking tough on immigration.

But its latest pledge to reduce crossings from northern France in small boats comes with a blatant promise to defy international conventions.

“It’s not racist for anyone… to want to control our borders, it’s not bigoted to say that we have too many asylum seekers who are abusing the system,” said Home Secretary Suella Braverman.

The stance earned Braverman, whose parents emigrated to Britain from Kenya and Mauritius in the 1960s, a standing ovation at this week’s Conservative party’s annual conference.

The 42-year-old anti-EU right-winger, who has been in the job for the past month, pointedly vowed to get tough on asylum seekers who do not “meet the needs of the country”.

“If you deliberately enter the United Kingdom illegally from a safe country, you should be swiftly returned to your home country or relocated to Rwanda. That is where your asylum claim will be considered,” she said.

Successive Conservative governments since 2010 have been promising to drastically reduce the number of migrants but to no avail.

Since the beginning of the year, a record 33,500 people have crossed the Channel in small boats.

Since 2018, Iranians and Iraqis have accounted for almost half of all migrants intercepted on the route.

Zoe Gardner, an expert on British migration and asylum systems, said while the pro-Brexit Tories have never managed to reduce immigration, they have made a tougher for asylum seekers to settle.

“For a long time, it (immigration policy) has been a way to gain support, when every other area of policy seems to be a failure for them,” she told AFP.

“Every time, the government of Boris Johnson had a bad week in the newspapers, you can be sure they would announce another plan to target immigrants just to distract people.”

The strategy, though, is in danger of running out of steam, she added.

Britons are overwhelmingly in favour of taking in refugees, according to polls, but are now more concerned about a cost-of-living crisis.

Proposing to ban access to asylum would be a violation of the UN Refugee Convention to which Britain is a signatory.

It states that a migrant can travel in any way he or she wishes — or can — to a country to seek refuge, without being harmed by the mode of arrival.

For some experts, such a ban would result in court action, just as it did when the government attempted to deport the first batch of failed asylum seekers to Rwanda.

In June, a plane bound for Kigali was grounded after last-minute legal challenges in the English courts, and a ruling at the European Court of Human Rights.

Braverman, a former attorney general and successor to another hardliner Priti Patel, blasted the ruling of the “foreign court”, which Britain helped set up after World War II.

She told conference delegates with a smile that her “dream” for Christmas would be to see “a front page of The Telegraph with a plane taking off to Rwanda”.

According to Braverman’s own department, 94 per cent of the 50,000 or so migrants who arrived in the UK across the Channel between January 2018 and June 2022 applied for asylum.

Some 82 per cent of those applicants were still waiting for a decision, but the majority who have received a response were successful.

“We are talking about people with good reason to seek asylum in UK, with no other way of doing so because the government has closed the majority of other options”, said Daniel Sohege, a refugee law specialist who heads the association Stand For All.

As the law currently stands, a migrant must be physically in the UK to start the asylum process.

But there is “no way” that London would allow them to arrive in the country and seek refuge, Zoe Gardner said.

The UK also relies on its island status and believes that it does not have to take in migrants who have travelled through other so-called safe countries.

With this impossible equation for refugees, “the UK receives fewer asylum applications than France, Germany or Italy”, said Gardner. — AFP