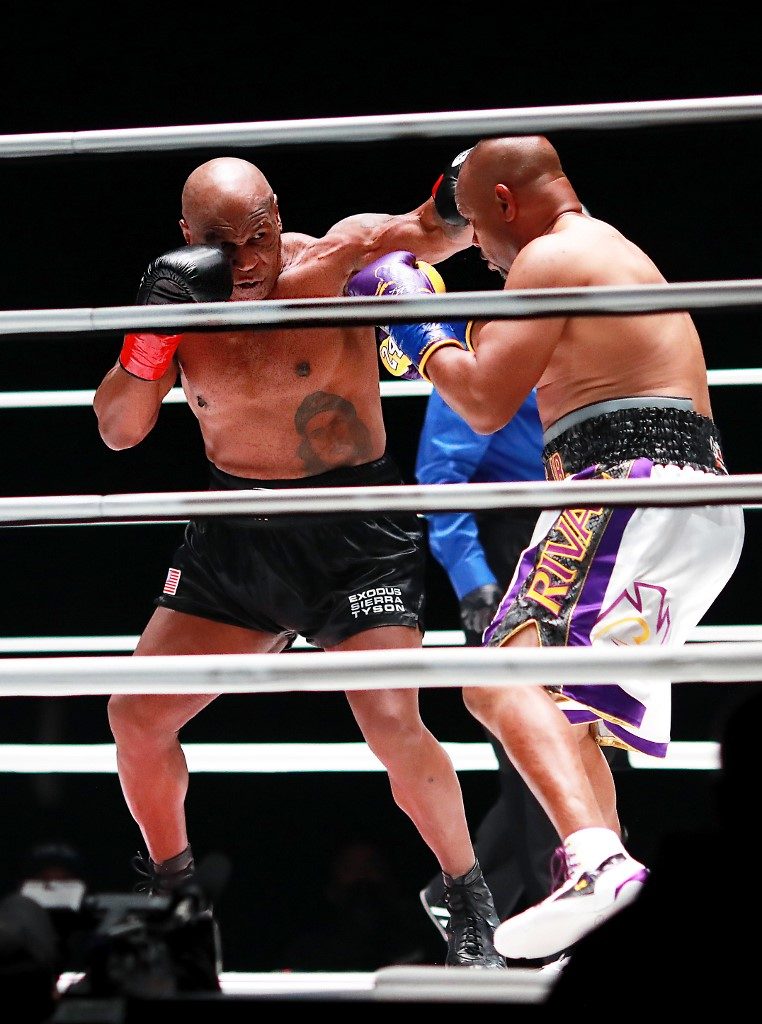 Both former heavyweight champions reacted differently towards the match outcome

LOS ANGELES • Mike Tyson’s return to boxing at age 54 ended in a draw with 51-year-old Roy Jones Jr on Saturday in an eight-round exhibition battle of former heavyweight champions.

Fifteen years after retiring with a 2005 loss to journeyman Kevin McBride, Tyson made his comeback at Staples Center in Los Angeles without spectators in a pay-perview matchup that mixed curiosity and nostalgia.

California State Athletic Commission officials required two-minute rounds instead of the usual three-minute rounds, mandated larger than normal 12oz gloves, said neither fighter could seek a knockout and declared there could be no official winner in safety moves for the over-50 fighters.

“Sometimes that two minutes felt like three minutes,” Tyson said. “I’m glad I got this under my belt and I’m looking forward to doing it again.”

An “unofficial” panel of former World Boxing Council champions at ringside scored the bout a draw, an outcome that Tyson applauded despite appearing to dominate.

“I’m good with that,” Tyson said, admitting he thought he had won the fight. “Yeah, but I’m good with a draw. The crowd was happy with that.”

Jones, who looked tired and grabbed Tyson much of the fight, was unhappy at a draw.

“I ain’t never happy with a draw. I don’t do draw,” Jones said, admitting that Tyson hurt him throughout the bout, particularly with body blows.

“If he hits you with his head, punches, body shots, it don’t matter, everything hurts. Body shots definitely took a toll. Body shots are what makes you exhausted.”

Tyson, who entered 50-6 with 44 knockouts (KOs), lost 100lb (45.36kg) and began training again, his desire to get back in shape becoming a hunger to strap on the gloves once more.

Jones, who entered 66-9 with 47 KOs, had not fought since a February 2018 cruiser-weight victory. He hoped a solid effort against Tyson might set up a fight with 45-year-old Brazilian mixed martial arts star Anderson Silva.

Tyson came out aggressive and fast, swinging and connecting often to the body of Jones, who was able to hit and evade at times, then hugging Tyson often when all else failed.

“You came back. I hit you with good shots and you took it,” Tyson told Jones. “We have to do this again.”

A hard left to the head stung Jones in round two and he spent much of the third and fourth rounds holding and moving into clenches with Tyson.

“It’s something in there taking punches from Mike,” Jones said. “Once I go in there, I’m game. I’ll go to the end. I know when he hits me it’s going to hurt.”

Tyson landed an inside right and a hard left to the head of Jones in the fifth round, then connected to the body with a solid right and left in the sixth, Jones evading a right uppercut and tying up Tyson before he could land major combinations.

Tyson stung the midsection of Jones in round seven, but was held before he could press the advantage.

In the eighth and final round, Tyson pounded a pair of left hooks to the body, but Jones tied him up and they finished trading inside punches.

“I was very happy to go the eight rounds,” Tyson said. “I’m happier with going the distance.

“I was afraid I might get hurt. Why is nobody worried about my ass? I haven’t done this in 15 years.”

Tyson ruled the heavyweight division in overwhelming fashion in the late 1980s, but struggled through the 1990s, losing his title, being convicted of rape and serving a ban after biting a chunk out of Evander Holyfield’s ear.

He faded from the scene after a 2002 world title loss to Lennox Lewis and has returned now to help launch his Legends Only League for over-age star athletes.