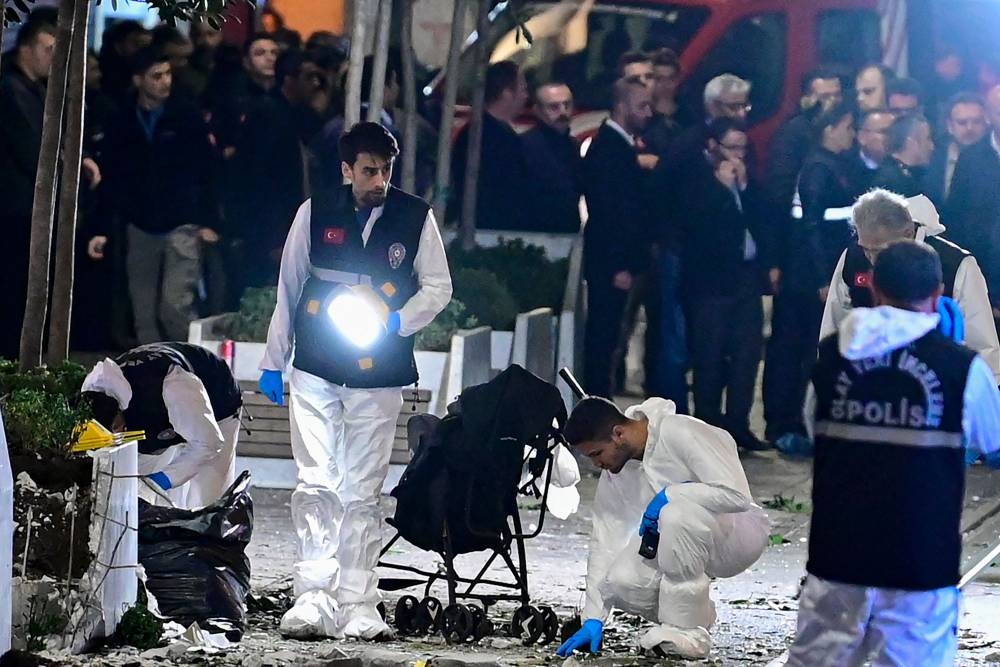 Members of the crime scene investigation police work as Turkish policemen secure the area after a strong explosion of unknown origin shook the busy shopping street of Istiklal in Istanbul, on November 13, 2022. — AFP pic

ISTANBUL, Nov 14 — Turkey’s interior minister accused the Kurdistan’s Workers’ Party (PKK) of responsibility for a bombing in a busy Istanbul shopping thoroughfare that killed six people and said Monday a suspect has been arrested.

The explosion tore through Istiklal Street, a popular shopping destination for locals and tourists, on Sunday afternoon, wounding dozens.

A suspect was arrested by the early hours of Monday.

“The person who planted the bomb has been arrested,” interior minister Suleyman Soylu said in a statement broadcast by the official Anadolu news agency.

“According to our findings, the PKK terrorist organisation is responsible,” he said.

The PKK, blacklisted as a terrorist group by Ankara as well as its Western allies, has kept up a deadly insurgency for Kurdish self-rule in southeastern Turkey since the 1980s.

Regularly targeted by Turkish military operations, the group is also at the heart of a tussle between Sweden and Turkey, which has been blocking Stockholm’s entry into Nato since May, accusing it of leniency towards the PKK.

“It might be wrong if we say for sure that this is terror but according to first signs … there is a smell of terror there,” Erdogan told a news conference on Sunday.

Turkey’s vice president Fuat Oktay said: “We believe that it is a terrorist act carried out by an attacker, whom we consider to be a woman, exploding the bomb”.

Justice minister Bekir Bozdag said: “A woman had been sitting on one of the benches for more than 40 minutes and then she got up.”

“One or two minutes later, an explosion occurred,” he told A Haber television.

“There are two possibilities,” he said. “There’s either a mechanism placed in this bag and it explodes, or someone remotely explodes (it).”

“All data on this woman are currently under scrutiny,” he said.

Soylu’s announcement did not add any details about the woman.

Turkish cities have been struck by Islamists and other groups in the past.

Istiklal Street was hit during a campaign of attacks in 2015-2016 that targeted Istanbul and other cities, including Ankara.

Those bombings were mostly blamed on the Islamic State group and outlawed Kurdish militants, and killed nearly 500 people and wounded more than 2,000.

Helicopters flew over the city centre after the attack. Police established a large security cordon to prevent access to the area for fear of a second explosion.

Images posted on social media showed the explosion was followed by flames and immediately triggered panic, with people running in all directions.

Several bodies were seen lying on the ground nearby.

“I was 50-55 metres away, suddenly there was the noise of an explosion. I saw three or four people on the ground,” witness Cemal Denizci, 57, told AFP.

“People were running in panic. The noise was huge. There was black smoke,” he said.

Istiklal, in the historic district of Beyoglu, is one of the most famous arteries of Istanbul. It is entirely pedestrianised for 1.4 kilometres, or about a mile.

Criss-crossed by an old tramway and lined with shops and restaurants, it attracts large crowds at the weekend.

Many stores closed early in the neighbouring district of Galata, while some passers-by, who came running from the site of the explosion, had tears in their eyes.

A massive deployment of security forces barred all entrances and rescue workers and police could be seen.

Turkey’s radio and television watchdog, RTUK, placed a ban on broadcasters showing footage of the blast, a measure previously taken in the aftermath of extremist attacks.

Access to social media was also restricted after the attack.

A reaction came quickly from Greece, which “unequivocally” condemned the blast and expressed condolences to the government and people of Turkey.

French President Emmanuel Macron said in a message to the Turks: “We share your pain. We stand with you in the fight against terrorism”.

“Shaken by news of the despicable bombing in Istanbul targeting innocent civilians,” Israeli President Isaac Herzog tweeted in Turkish and English. “The whole world must stand united and firm against terror.”

Ukrainian President Volodymyr Zelensky also tweeted in Turkish: “The pain of the friendly Turkish people is our pain.”

EU Council President Charles Michel offered condolences to Turkey, tweeting: “My thoughts are with the victims & their families.” — AFP