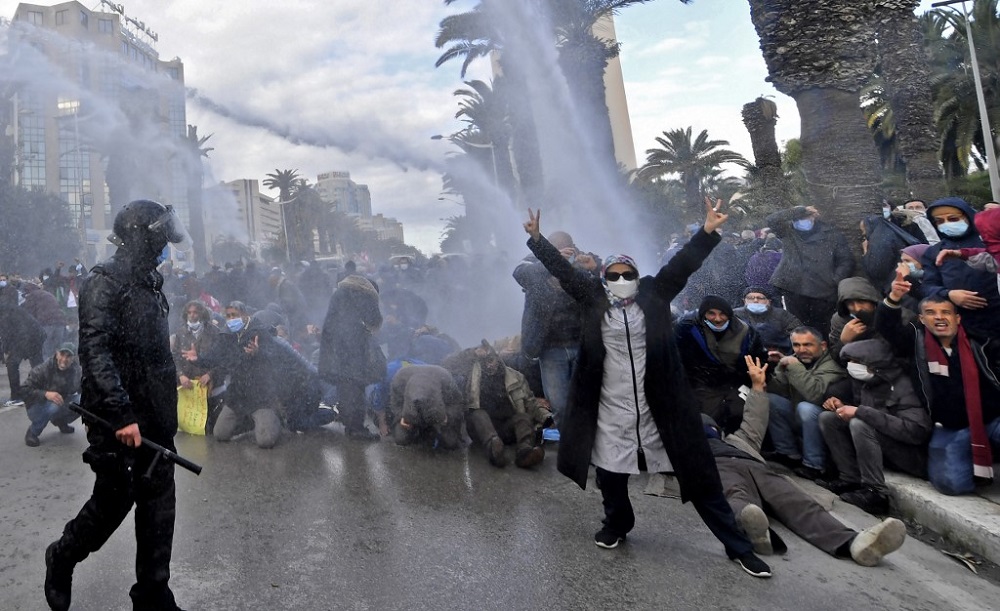 A Tunisian demonstrator flashes the V for victory sign as police fire water cannons during protests against President Kais Saied, on the 11th anniversary of the Tunisian revolution in the capital Tunis January 14, 2022. — AFP pic

The protesters had gathered despite restrictions on gatherings imposed on Thursday as coronavirus cases surge in the North African country, but which Saied’s opponents say are politically motivated.

AFP reporters saw over 1,000 protesters gathered on Mohamed V Avenue, but they were prevented from reaching the iconic Habib Bourguiba Avenue, epicentre of the vast protests that toppled Ben Ali in 2011.

Some demonstrators broke through a police cordon before police baton charges and tear gas and water cannons pushed them back.

“It’s the most violent intervention by security forces we’ve seen in the past year, both in terms of the methods used and the number of arrests,” said Fethi Jarray, president of the independent anti-torture body the INPT.

Some protesters had chanted: “Down with the coup!”, a reference to Saied’s July 25 moves in which he sacked the government, froze parliament and seized a range of powers.

He has since virtually ruled by decree, to the outrage of his opponents, including the powerful Islamist-inspired Ennahdha party.

Some Tunisians, tired of the inept and graft-ridden parliamentary system, welcomed his moves.

But for his critics, both in Ennahdha and on the left, they foreshadowed a possible return to the same kind of autocratic practices that were common under Ben Ali.

“We’re here to defend the institutions of the republic,” she said.

“This people, which toppled a 23-year dictatorship, is not going to let another dictator take its place.”

One of Saied’s moves was to shift the official anniversary of the revolution from the date of Ben Ali’s flight to December 17, the day in 2010 when vegetable seller Mohamed Bouazizi burned himself alive sparking the first mass protests.

The move was seen as symbolising Saied’s view that the revolution had been stolen.

“There were martyrs, blood was spilled, and there are still people who were wounded in the revolution,” she said. Saied “should have let the people express themselves and celebrate.”

One woman protester told a policeman on Friday: “You’re working for Sisi and the United Arab Emirates!”

The protests took place despite a string of measures, including a nighttime curfew and a ban on public gatherings, brought in on Thursday evening purportedly to tackle a steep rise in coronavirus infections.

The rights group’s deputy regional chief, Amna Guellali, said it was “imperative that the Covid-19 health crisis not be used as a pretext to suppress rights.”

Ennahdha, the biggest party in the suspended parliament, had accused Saied Thursday of “utilising the coronavirus crisis for political ends, targeting what remains of the margin of freedom” in Tunisia.

The showdown comes amid heightened tensions between the party and Saied after former justice minister Noureddine Bhiri and another senior Ennhadha official were arrested by plainclothes police officers on December 31 and later accused of possible “terrorism” offences.

“We’re not going to be afraid and we’re not retreating,” she said. “We believe in freedoms and democracy.” — AFP