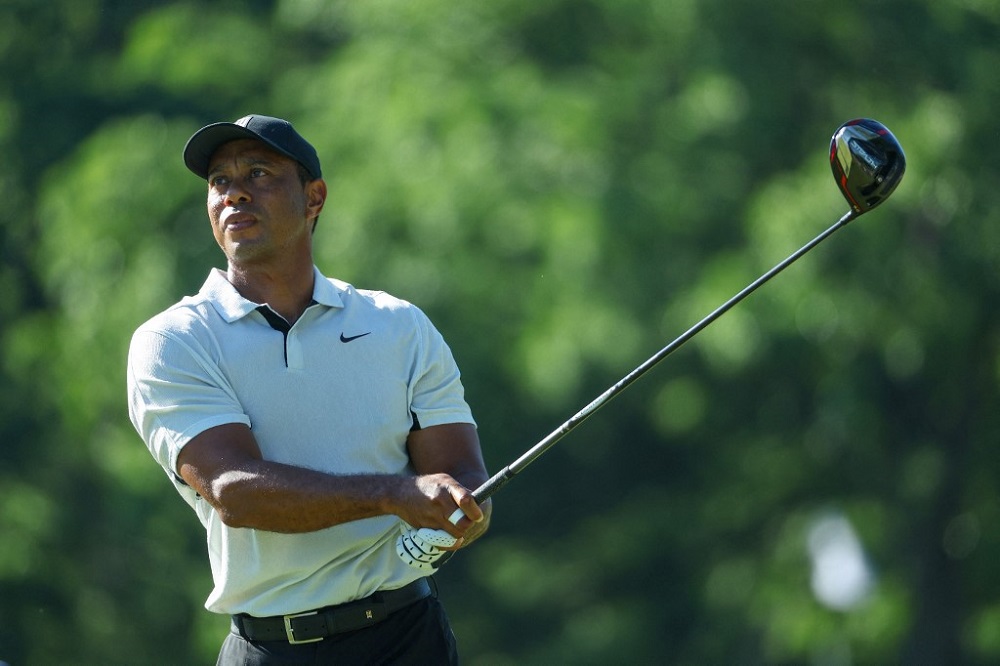 Tiger Woods of the United States watches a tee shot during a practice round prior to the start of the 2022 PGA Championship at Southern Hills Country Club in Tulsa May 16, 2022. — Picture by Andrew Redington/Getty Images via AFP

TULSA, May 17 — Tiger Woods excited spectators and rivals alike with a back-nine practice round yesterday at Southern Hills, continuing his comeback from severe leg injuries before this week’s PGA Championship.

Woods, whose incredible return at last month’s Masters came only 14 months after a rollover car crash, brought a similar buzz to the roars he created at Augusta National.

“Just watching him at the Masters, that was unreal, just the crowds and what it does to a tournament when he tees it up,” said Norway’s Viktor Hovland. “Just getting used to big crowds, loud crowds.”

Woods played the front nine on Sunday and said his surgically repaired right leg — held together with pins, rods and screws — feels stronger than it did a month ago.

“I’m excited,” Woods told reporters Sunday. “I’m not going to play that much going forward, so anytime I do play, it’s going to be fun.”

Woods made the cut at the Masters but battled through pain simply to walk 72 holes and faded to his worst-ever Augusta rounds of 78, the 15-time major winner calling the effort to finish four rounds among his greatest feats.

The former world number one, now ranked 818th, won the 2007 PGA at Southern Hills, although the course underwent an US$11 million revamp in 2018. If his body has the strength and stamina to walk 72 holes, his skill could make him a major threat.

“If there’s ever a question if Tiger can contend, we can all just kind of chuckle at that. Never is he going to be in a field where he can’t contend,” home-state hero Talor Gooch said.

“He might not have as good of odds in some places but I think as long as he’s in the field, if he ever gets it slotted, no matter how old he is, no matter what’s going on, he’s always going to have a chance.

Woods, 46, seeks his 16th career Grand Slam title, two shy of the record set by Jack Nicklaus, and a 73rd US PGA Tour triumph, which would break the all-time record he now shares with Sam Snead.

“When Tiger is in the field… there’s just a different energy,” Gooch said. “Every time he’s in the same field, you just cherish it. We all know what he’s been through.”

Bryson DeChambeau, the 2020 US Open winner who underwent left hand surgery last month after missing the cut at the Masters, tweeted yesterday he will practice the next two days and see about playing the event.

“On my way to Southern Hills CC,” tweeted DeChambeau. “Going to test how I am feeling over these next couple days and decide on whether to compete. Looking forward to being in Tulsa.”

Jordan Spieth will try to complete a career Grand Slam by winning the PGA after a second-place finish in his hometown PGA event last weekend and a win last month at the Heritage, his game in rare form.

Spieth captured the 2015 Masters and US Open and the 2017 British Open and makes his sixth attempt to join an elite group to complete the sweep that includes Woods, Nicklaus, Ben Hogan, Gary Player and Gene Sarazen.

Phil Mickelson, who became golf’s oldest major winner last year when he won the PGA at Kiawah Island at age 50, withdrew from the event on Friday. It’s only the fourth time in the past half-century a major winner will not defend his crown.

Mickelson has not played since controversial comments about the Saudi-backed LIV Golf series were revealed in February, the six-time major winner calling the Saudis “scary” with a “horrible record on human rights.” He later apologised and said he needed a break from golf.

“I know it has been a rough go the last few months, a tough situation to be in,” Fowler said. “It’s unfortunate that he didn’t feel like the place that he should be right now is here.”

Hovland said players wanted to see the US left-hander return this week.

“It’s a bizarre situation, that’s for sure,” Hovland said. “It’s not often the defending major champion doesn’t come back to defend.

“I think we all would have liked to have Phil here and tee it up and see how he would have done. It’s just a weird situation.” — AFP