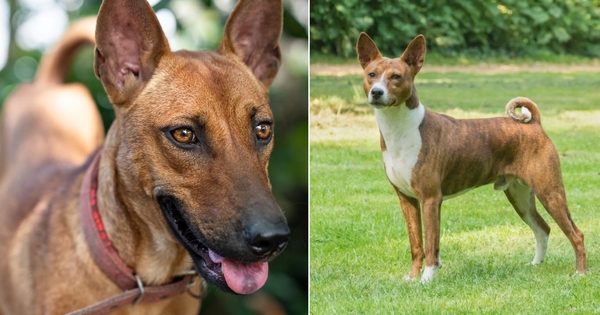 When in Malaysia, a common sight that is often overlooked is the number of stray dogs that occupy almost every street or sidewalk around

Whether you are deep in the countryside or out and about in the metropolitan cities of Malaysia, you can always count on spotting a stray dog wandering about.

We usually call them anjing kampung or village dogs, but have you ever wondered if there’s a name for these strays that no one seems to give a second look?

Well, it turns out that the kampung dog that many of us often overlook is apparently one of the rarest dog breeds in the world!

And they are called the Telomian.

According to the products and resources company for pets, Hepper, the Telomian is a dog breed native to Peninsular Malaysia and is nearly impossible to find in other parts of the world, which is why it is considered a rare breed.

Telomians were bred and domesticated by the Orang Asli, where they were trained to be hunters to catch small vermin and snakes for them.

These dogs were also tasked with protecting houses, food, and occupants of villages. They were said to enter homes first to check and alert their masters if there were any dangers lurking inside. What good bois!

The Telomian breed came to light in the Western world when anthropologist Dr Orville Elliot documented the breed in 1963. He coined the breed’s name, Telomian, after discovering them in the Sungai Telom valley in Pahang.

Image via The Smart Canine

The Telomian measures between 38cm and 45cm in height and can weigh between 8kg and 13kg. They usually have a life span of 10 to 15 years and are generally considered a healthy breed. However, because there isn’t much information about the breed, it’s hard to tell if they have any significant health disorders.

One of their most notable features is that Telomians typically have blue-black tongues that mirror the tongue of the Chinese Chow Chow.

They are also excellent climbers and can jump to great heights. This is due to the fact that the Orang Asli lived in tall tree houses to avoid dangerous animals that reside on the jungle floor. Therefore, these dogs had to scale between six and eight foot ladders in order to get up to the tree houses.

This has caused them to be incredibly adept at using their paws, where they are able to hold objects, food, and even use tools to their advantage. Therefore, if you plan to have a Telomian in your house, you might want to lock your doors.

These unique dogs also rarely bark and prefer to howl or yodel the song of their people instead. While there isn’t much information as to why Telomians don’t bark, this trait is said to be similar to the New Guinea singing dog, the Indian pariah dog, the African Basenji, and the Australian dingo.

Having worked and lived around humans for generations, the Telomian’s temperament makes them the perfect family dog

Playful, athletic, sociable, curious, and very intelligent, the Telomian could rival the Golden Retriever as the ideal family dog.

Not only that, they are fierce protectors and will defend and protect their humans, making them great guard dogs if that is what you’re looking for in a four-legged companion. They are very alert and will have no problem warning you of any danger.

And because they are short, smooth coated dogs, they are considered low-maintenance and do not require much grooming.

While very affectionate and loyal to their humans, Telomians are hunting dogs and have a very high prey drive. They may have strong instincts to hunt smaller animals, like smaller pets.

So, keep your rabbits, cats, hamsters, or any smaller pet away if you decide to get a Telomian.

It is important to note that they are also athletic and high-energy dogs, so regular walks, exercise, and stimulation are necessary to keep a Telomian happy and healthy.

If you are thinking about getting a Telomian for yourself, you might have a hard time getting a pure-bred one in Malaysia

According to Cilisos, most Telomians in Malaysia are currently cross-bred and most pure-breds are only found in the US now.

It is believed that all the Telomians that exist in the US are descended directly from two pairs of Telomians that were brought from Malaysia to the US between the 1960s and 1970s.

Well, whether mixed or pure, Telomians seem to be a great breed of dog to have in your home. I mean, you can’t possibly resist such a ‘dog-gone’ cute face like that, can you?

Idk, next time I see a kampung dog I’ll just…

These clever dogs out here doing their best to help us humans: