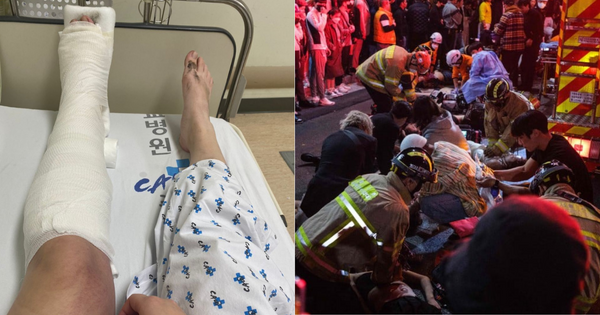 On the night of 29 October, tragedy struck South Korea, with at least 151 people killed in a crowd crush in Seoul’s Itaewon district

The incident occurred during the Halloween weekend, when up to 100,000 people gathered in the district to celebrate the holiday for the first time in three years after South Korea lifted COVID-19 restrictions, reported The New York Times.

Next to the Hamilton Hotel in Itaewon was a narrow, sloping alley completely jammed with people. However, the crowd from the alley’s entrance kept growing, which resulted in people getting stuck in the area, crying, and screaming to get out.

People then began to fall and pile on top of one another, setting off what would become one of the deadliest peacetime accidents in recent South Korean history.

Photo of the empty narrow, sloping alley that was packed with people on the night of the tragedy.
Image via Jiro Akiba/BBC

Athena Lim, a Malaysian woman and a Korean language student at Yonsei University, recalled the hours before she was caught in the incident

In an interview with SAYS, Athena, who hails from Sabah, said she and five other friends were having dinner in the South Korean district of Sinchon, an area in the northern part of Seoul where many youngsters hang out, earlier in the evening.

After hearing that Halloween was “a big deal there”, the group decided to head to Itaewon and arrived at 10pm to check out the event.

They arrived to find it already bustling with people. Although the streets were busy, they were still able to get around. Holding on to each other, the six friends weaved through the crowd.

The photo shows a sea of people packed inside the alley, jostling against each other in their attempt to find space.
Image via Reuters/New Straits Times

The group of six then decided it would be smart to leave the area for the night.

Heading to the subway station to get out of Itaewon, they suddenly found themselves trapped in the narrow alleyway where the surge occurred.

There were two streams of foot traffic in the alley, one going down the slight slope and the other going up.

According to Athena, the crowd was moving slowly through the alley because of the limited space, but she could feel more people pushing them forward.

“We were still moving until the people in front of us suddenly stopped,” she said, adding that she and her friends moved to the side at this point.

Photo of a group of police officers inspecting the scene hours after the tragedy struck.
Image via AP/New Straits Times

It was then that it occurred to her that the crowd in the back kept pushing forward, unaware that the people in front of them had stopped moving

“When the crowd started to push, my body started to get lifted and my feet were no longer touching the ground,” recounted Athena, who was separated from her friends at this point.

“That’s when we got separated. The four of us were somehow still within arms reach of each other during the crowd crush, but unfortunately we could no longer see two of our friends.”

Her body was lifted higher and higher as more people pushed forward. Before she knew it, Athena was caught between people with both her feet pointing downward, while others were stacked on top of her.

Photo of emergency workers tending to injured as a group of onlookers watch.
Image via AFP/New Straits Times

It took around 40 minutes until help arrived, but for Athena, it felt like aeons

“I was struggling to breathe with all the weight on me that I kept closing my eyes, accepting that if it was my time to go, then so be it,” she recalled herself thinking while waiting for the rescuers.

However, a Korean man who was stacked on top on her noticed this and tapped her on her shoulder, urging her to keep her eyes open and to keep fighting.

“Because of him I decided that this was not my time to die.”

From this moment, Athena said she looked up at the sky and tried to remain calm. She eventually stopped struggling and was able to breathe a little better after that.

During this whole ordeal, Athena noticed a young lady beside her who was in distress, crying while calling out for her boyfriend. The woman was also struggling to breathe, and she soon lost consciousness afterwards.

Photo of two emergency responders moving a victim on a stretcher after the stampede.
Image via Reuters/New Straits Times

Out of the group of six friends, only four of them made it out alive, Athena disclosed

Once Athena was pulled out of the crowd, she could no longer find her friends, so two Korean girls and a guy took care of her while waiting for her to receive medical attention, as the authorities prioritised people who needed urgent care.

She received treatment and was given medication for her left leg, which she said will take some time to regain sensation.

Athena’s mother, Yolanda, informed SAYS that she was only aware of the incident on Sunday, 30 October. After several attempts to get in touch with the Malaysian embassy were unsuccessful, Yolanda and her husband immediately set off for Seoul from Kota Kinabalu the following day.

Athena’s leg injury that she had sustained from the incident.
Image via Athena Lim (Provided to SAYS)

The student said the Korean police had reached out to her to take a statement, but she did not receive a word from the Malaysian Embassy on the day of the incident

Neither her mother nor her friend’s brother heard back from the embassy despite their multiple attempts to reach out to them for help.

It was only after Sabah Local Government and Housing Minister Datuk Seri Masidi Manjun contacted the Ministry of Foreign Affairs that embassy representatives got in touch with Athena.

The Malaysian Embassy in Korea reached out to her on Monday night, 31 October, while she was attending a friend’s memorial service. They insisted on visiting her and sending her home, but she could not accept the offer as she was at the memorial service.

On Sunday morning, 6 November, Athena and her parents went to the Malaysian embassy to meet with the Malaysian Ambassador and the embassy staff.

Here is a list of things to take note of the next time you find yourself in a crowded situation: