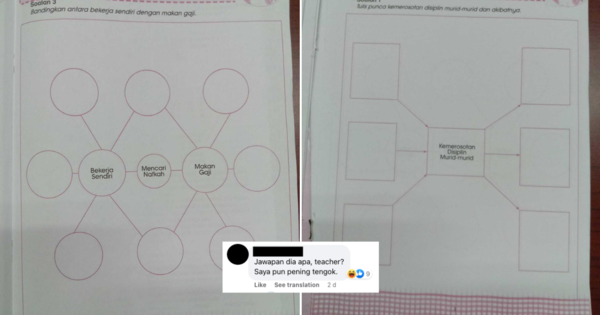 While homework is often meant to test and nurture the skills kids learn in the classroom, are there some things that just go way too far for kids of a certain age?

A Malaysian teacher, who goes by the name Aminah Adnan on Facebook, recently shared a post that grabbed the attention of a slew of people due to its sheer complexity.

“How am I not supposed to support Teacher Fadli Salleh?” the caption began. For those who aren’t up to date, Mohd Fadli Salleh is a well-known teacher on social media. He recently came under fire for voicing his opinion on the primary school syllabus being too advanced for young children to grasp, thereby deferring the proper opportunity for them to learn according to the natural progression in school.

By the looks of things, it seems as though his points may have some value in the post.

In her post, Adnan shares two photos related to Bahasa Melayu (BM), meant to be answered by primary school students in Standard Two

Posting them side-by-side, each activity requires kids to fill in bubble maps with their own answers.

The first photo asks kids a two-layered question: list three factors that would cause a decline in discipline among students, then list three repercussions that would occur if students are less disciplined.

A fair share of responders asked Adnan what the answer was, citing how they themselves are confused by the question.

Another commenter cheekily added how secondary school students may not even know the answers for these questions.

A few more comments questioned the creator of these activities, saying that it’s not realistic for children aged eight to have to answer these. “To the person who curated these questions, if we were to give it to their child, could they answer it? Are they a genius? Do they go to a private school? Very full of themselves, indeed.”

Adding a more lighthearted comment to the mix, one user said that children of that age should learn to familiarise themselves with the school, as opposed to learning such difficult syllabi. “They won’t even know what proper discipline is yet, let alone this.”

A couple of commenters, who claimed to be teachers themselves, expressed frustration over complex and complicated questions such as this. “It’s frustrating to teach primary school children this stuff. It’s not as though they should be expected to be geniuses the second they leave the womb.”

Another person added her support for teachers being expected to teach children difficult subject matter. “You must stand united, don’t get taken down over this.”

One of the most fruitful comments of the bunch came from a woman who questioned the relevance of these questions, whether they would even be used to test children in primary school.

“The scheme of answers don’t tally with the kind of questions actually answered in schools for exams. I am very suspicious of these kind of books that go out into orbit of teaching, giving activities that aren’t even slightly relevant,” she said.

One Malaysian dad just compared our local Standard One syllabus with homework in the US — and the differences are astounding:

Here’s the rundown of Mohd Fadli Salleh’s concern over the primary school syllabus being too difficult:

This isn’t the first time rather unusual questions have popped up within the education system: