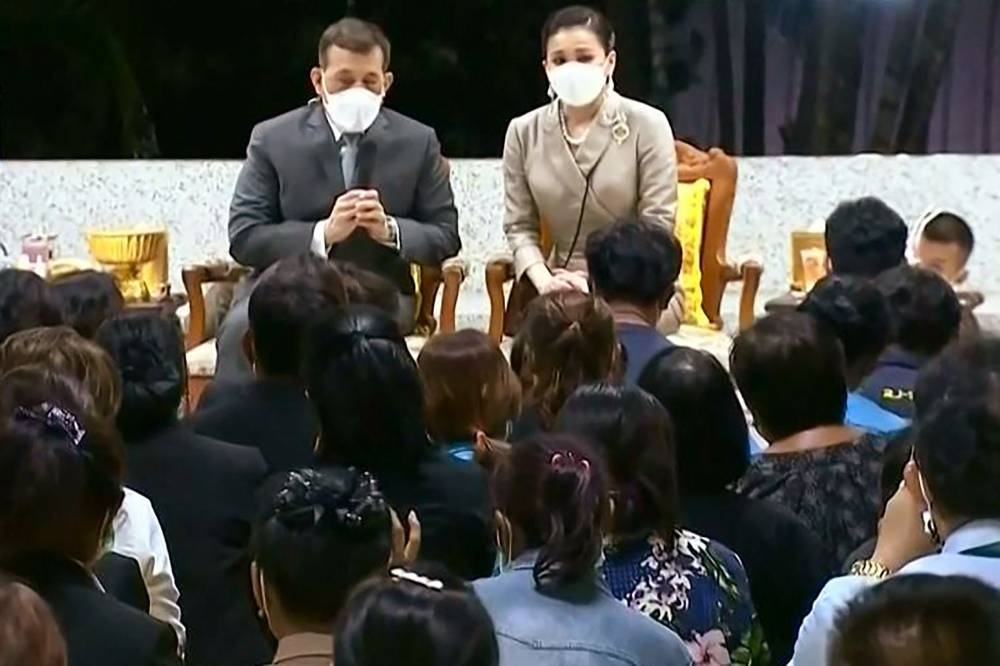 This frame grab from Royal Pool video footage made available via AFPTV on October 7, 2022 shows Thailand’s King Maha Vajiralongkorn and Queen Suthida meeting people at a hospital in Thailand’s Nong Bua Lam Phu, where the monarch met survivors and relatives after a mass shooting by a former police officer at a nursery. — AFP pic

King Maha Vajiralongkorn met survivors and relatives at a hospital in northeastern Nong Bua Lam Phu province late yesterday, a day after an ex-policeman murdered 24 children and 12 adults on a three-hour gun and knife rampage in a sleepy rural area.

Buddhist funeral rites and prayers for the dead were expected to begin later today, starting three days of mourning for the victims of one of the country’s worst ever mass killings.

As the king offered his help and condolences, grieving families knelt on the hospital floor — as is Thai custom in the presence of the monarch, who is seen as semi-divine.

“I come here to give you support. I am extremely sad for what has happened. I share your sorrow, your grief,” he said in video footage published online today.

“There are no words that can express the sorrow. I support you all and wish you to be strong, so the spirits of the children can be at ease.”

The king, with Queen Suthida at his side, said he would pray for the dead.

The royal visit came after a day of grief at the small yellow-walled nursery on the edge of a village in Na Klang district, some 500 km (300 miles) north of Bangkok.

Heartbroken parents placed white roses one by one on steps of the nursery where their young children’s lives were brutally cut short on Thursday afternoon by sacked police sergeant Panya Khamrab.

Some, struggling to comprehend the atrocity, wept inconsolably, clutching their children’s favourite toys or blankets — and in one case a half-full bottle of milk.

The dead include pregnant teacher Supaporn Pramongmuk, whose husband posted a poignant tribute on Facebook.

“I would like to say thank you for all the support for me and my family. My wife has fulfilled her every duty as a teacher,” Seksan Srirach wrote.

The attacker forced his way into the childcare centre at about 12:30 pm (0530 GMT) on Thursday to begin his murderous spree, opening fire with his own legally owned 9mm pistol and slashing with a knife.

Afterwards the 34-year-old went home to murder his wife and son before taking his own life, police said, ending the rampage at about 3 pm.

In total, he killed 24 children — 21 boys and three girls — and 12 adults. Most died from a combination of knife wounds and gunshots, according to police investigators.

PM Prayut has ordered a swift probe into the massacre, and it has emerged that Panya was sacked from the police for drug abuse.

Several people in the close-knit community have told AFP he was known in the area as a methamphetamine addict. — AFP