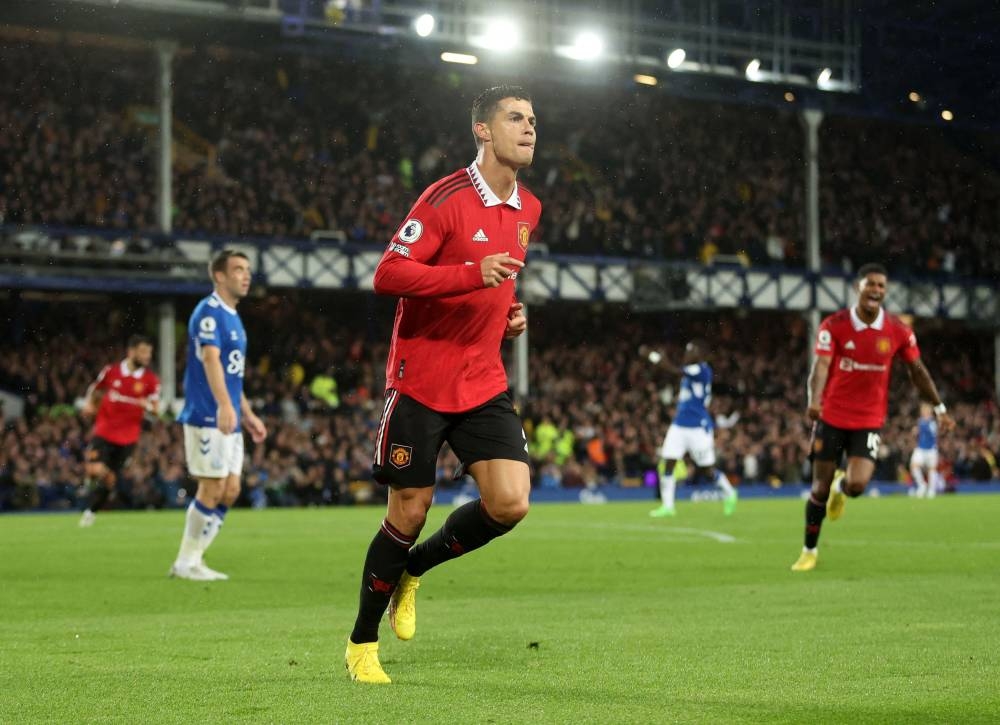 LIVERPOOL, Oct 10 — Erik ten Hag is hoping Cristiano Ronaldo’s 700th club goal of his career can spark a return to form after the Portuguese scored the winner in Manchester United’s 2-1 win at Everton on Sunday.

The five-time Ballon d’Or winner has had to get used to life on the sidelines under Ten Hag after starting just once in the Premier League this season.

Ronaldo was again left on the bench but was handed an early introduction by an injury to Anthony Martial.

The 37-year-old took his chance just before half-time to give United a deserved three points from an error-strewn game by both sides.

“Every player needs it (confidence), even when you are the best in the world,” said Ten Hag after Ronaldo’s first Premier League goal of the season.

“I worked with many goalscorers and they need the goals in every season to have that feeling, that confirmation of the intuition.

“Once they have some goals, they come in a flow and games go easier. That will happen with him as well.”

The Red Devils were seeking a response to being thrashed 6-3 by Manchester City last weekend but got off to the worst possible start.

On his first Premier League start since arriving for ?60 million (RM310.7 million) from Real Madrid, Casemiro was culpable for the opening goal as he was robbed in possession by Amadou Onana and the ball eventually broke for Alex Iwobi to curl into the top corner from outside the box.

Everton came into the game with the best defensive record in the league, but were quickly undone as United levelled within 10 minutes.

Antony became the first United player to score in his first three Premier League games with a cool finish from Martial’s pass.

Martial only lasted half an hour after pulling up with a hip injury in the warm-up.

His departure paved the way for Ronaldo to make his entrance and he took just 14 minutes to make his mark.

Casemiro made amends for his earlier error by winning possession in midfield and playing in his former Real Madrid teammate to fire low under Jordan Pickford.

That strike took Ronaldo’s tally in two spells with United to 144.

Madrid’s record goalscorer hit 450 for the Spanish giants, while he scored 101 times for Juventus and five for Sporting Lisbon.

“He’s one of the greatest players to have graced the game,” said Everton boss Frank Lampard. “You can do nothing but admire those numbers.”

Ronaldo should have had a second just before the hour mark as he nodded wide from another teasing delivery from Casemiro.

Everton had been on a seven-game unbeaten run, but offered little in the search of an equaliser until a late aerial assault and were lucky to avoid conceding a third goal 10 minutes from time.

Marcus Rashford pounced on a mistake by Iwobi to round Pickford and slot into an empty net, but the United forward was penalised for handball by a VAR review.

Victory takes Ten Hag’s men up to fifth and within nine points of leaders Arsenal with a game in hand. — AFP