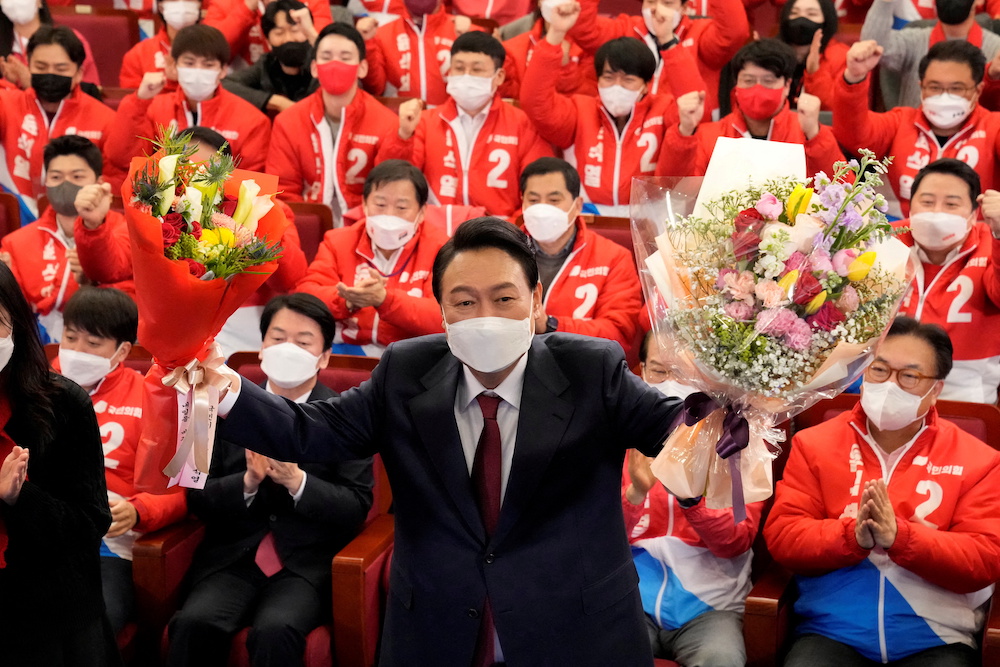 His victory in Wednesday’s bitterly fought election marks a remarkable turnaround for the main conservative bloc, now known as the People Power Party, which has regrouped since the 2017 snap election was held after the impeachment and ouster of then President Park Geun-hye.

Yoon is a former prosecutor-general involved with Park’s case who fell out with outgoing President Moon Jae-in after being appointed by him, gaining notoriety over investigations of top presidential aides.

Yoon has pledged to stamp out graft, foster justice and create a more level economic playing field, while seeking a “reset” with China and a tougher stance towards reclusive North Korea, which has launched a record number of missiles in recent months.

He faces the challenge of uniting a country of 52 million riven by gender and generational divisions, growing inequality and surging home prices.

Yoon will need to restore public trust in Korea’s institutions and is likely to conduct major “housecleaning” by following through on a campaign pledge to investigate Moon’s administration for corruption, she added.

Yoon, 60, edged out the ruling centre-left Democratic Party’s Lee Jae-myung to replace Moon, whose single five-year term ends in May. A formal announcement is expected to be made later on Thursday.

Yoon’s lack of elected political experience was seen as both a liability and an asset.

While his campaign was marked by gaffes and controversy, the race became a referendum on Moon’s economic policies from jobs to housing to wealth inequality.

“I would pay attention to people’s livelihoods, provide warm welfare services to the needy, and make utmost efforts so that our country serves as a proud, responsible member of the international community and the free world,” Yoon said at a victory ceremony with supporters.

The benchmark KOSPI .KS11 rose more than 2 per cent, its sharpest daily rise in at least three months, with Yoon expected to speed deregulation in South Korea’s capital markets.

The election was one of the closest in recent history and came after an unusually bitter campaign marred by scandals and smears. Both candidates’ disapproval ratings matched their popularity as scandals, mud-slinging and gaffes dominated what was dubbed the “unlikeable election”.

Lee’s loss casts doubt on Moon’s legacy, including his signature efforts to engage with North Korea, which have largely been stalled since talks fell apart in 2019.

The new president will likely face an almost immediate crisis with Pyongyang, which appears to be preparing to launch a spy satellite and has suggested it could resume testing of long-range intercontinental ballistic missiles or nuclear weapons for the first time since 2017.

Yoon has vowed to forge even closer ties with the United States — South Korea’s only treaty ally — in the face of increased missile activity by North Korea and competition with China, which is the South’s largest trading partner.

The White House congratulated Yoon, saying President Joe Biden looked forward to working closely with him to bolster the alliance.

Yoon and Biden spoke by telephone on Thursday, the White House later added.

“We can expect the alliance to run more smoothly and be in sync for the most part on North Korea, China, and regional and global issues,” said Kim from the Center for a New American Security.

Japanese Prime Minister Fumio Kishida welcomed Yoon’s win, and said he hoped to work closely with him to rebuild healthier ties with its neighbour amid tensions over historic and economic disputes dating to Japan’s 1910-1945 occupation of Korea.

More than 77 per cent of South Korea’s 44 million eligible voters cast ballots to pick their next leader, despite a record surge in new Covid-19 cases this week.

Yoon said he would work with opposition parties to heal polarised politics and foster unity.

“Our competition is over for now,” he said in an acceptance speech, thanking and consoling Lee and other rivals. “We have to join hands and unite into one for the people and the country.”

At a separate ceremony with supporters, Yoon said he would put top priority on “national unity,” adding all people should be treated equally regardless of their regional, political and socioeconomic differences.

Lee had conceded defeat and congratulated his opponent.

“I did my best, but failed to live up to your expectations,” he told a news conference, blaming his “shortcomings”. — Reuters