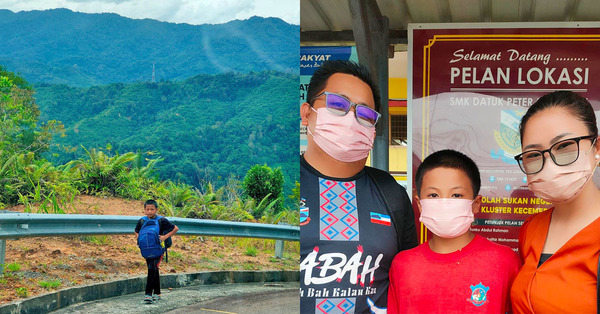 She said Ayon was planning to walk from his home in Terian, deep in the district of Penampang, to his school in Sugud.

“While many are groaning about heavy school bags, to achieve his dreams, my former student Ayon from Sekolah Kebangsaan Terian, is willing to walk for three hours alone with a bag full of textbooks and daily necessities to settle his own school affairs,” she wrote proudly.

Coming from a poor family, Fera said Ayon had to choose between staying at home to help his parents or attending school like other 13-year-olds, which would incur costs for transportation and food.

“I actually know this boy’s family and one day, out of concern, I just asked what his plans were and which secondary school he was going to,” Fera told The Star in an interview.

“When I found out that he might not be able to go to secondary school due to financial reasons, I asked him one question which was ‘Do you want to continue going to school?’ and he said ‘Yes’,” she said.

So, Fera told the student to stay put while she and her husband made the arrangements he needed to start high school.

Knowing the distance, the teacher said she was shocked that the boy was willing to walk through dirt roads alone for hours just to get to the school.

“I immediately took my car and started driving to the village from where I was, which was quite far away,” Fera said, adding that she came across the boy as he was halfway up a hill, which was when she took a photo of him and uploaded it to Facebook.

Adrian shared on Facebook that he brought Ayon to buy school equipment such as school uniforms, sports clothes, school shoes, stationery, and workbooks.

“I told him to take whatever he wanted, but he’s a good kid, he was shy and polite, and told me that I had already bought him enough and he would only take what he needed,” said the Sabahan actor.

Adrian also found out that Ayon is the fourth child out of seven siblings and that his mother is a housewife and his father was a farmer who recently became a security guard.

“They really live a disadvantaged life,” he observed and was moved to tears with Ayon’s reserve to not take more than he needed.

He also bought Ayon a bicycle, something the boy always wanted but could not afford, and encouraged the 13-year-old to study hard to achieve his dreams of becoming a firefighter.

Fera said she and her husband have already arranged for Ayon’s entry into Sekolah Menengah Kebangsaan Datuk Peter Mojuntin in Penampang, and have also gotten him a spot at the school’s hostel, so he does not need to travel or worry about food.

“For now, we have everything we need for Ayon already. Thank you to all the donors and your concern for this boy,” said the grateful teacher.

“I didn’t expect my post to go viral, but I hope one day we all can help many more like him.”