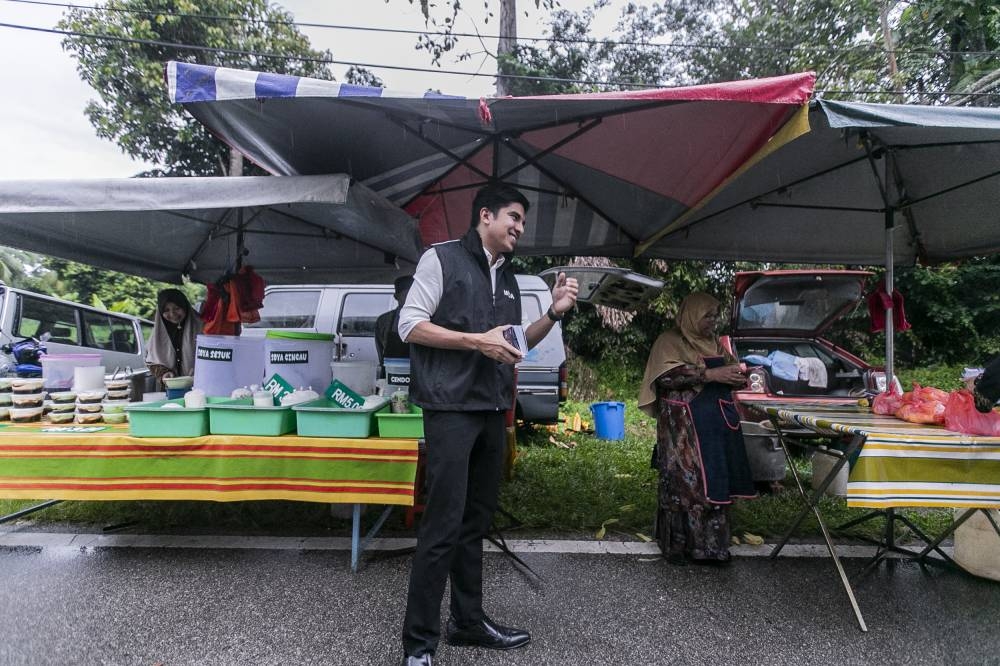 The five-point focus is to empower and preserve Muar’s local industry, empower and promote Muar as a northern Johor tourism hub, make Muar a clean and sustainable city, bringing Muar towards digitisation and to build and guarantee good governance of Muar.

At the beginning of his presentation, Syed Saddiq recapped his achievements in Muar in the previous term, saying that he had brought in RM50 million worth of developments and welfare for Muar electorates.

He said he had also hired one of the “big four” audit firms Ernst and Young to conduct a good governance review in 2021, to ensure that the administration of his service centre can be further improved.

“This is a very important matter, because when I go to the ground, many share that their children were forced to migrate out of Muar to get quality jobs. They were forced to migrate to Singapore, Johor Baru or Kuala Lumpur.Perhaps many do not know that Muar is one of the largest furniture hubs-it is number three in South-east Asia and one of the largest in the world,” he said, in referring to his first point of the manifesto.

He said in the pre-pandemic era, the import value of Muar’s furniture was RM9 billion and this increased to RM13 billion, post-pandemic, adding that more can still be done to spruce up the industry and create more jobs for Muar’s youths.

“It still relies on foreign labour and is unable to create high quality and high paying jobs,” he said, adding that he would work “very closely” to secure more matching grant and push for robotics automation, working together with the Ministry of International Trade and Industry (Miti), to reduce the dependency on foreign labour.

He said that the furniture industry is also yet to produce local products to be exported internationally.

“What usually happens is foreign countries will make their products here and then once the products are completed, they export it, they brand it and they sell it out. So they are focused more on the upstream while there is no downstream,” he said, adding that he will work with both the government and private sectors to address this.

He added that the high-value chain and the best jobs are created downstream.

On tourism, he hopes to work with a lot of stakeholders to make Muar a main tourism destination, adding that he wants to bring more conventions to Muar, like the Georgetown Festival.

Syed Saddiq said that a lot of public-private partnerships are needed to accomplish this.

On making Muar clean and sustainable, he said that the aim is to also make it green conscious, as part of a long-term plan.

“Here, we will work with local companies, local traders to ensure they do not overly rely on the usage of plastic in their sale of their products and we will also be working with local sectors to ensure we address the issue of waste oil disposal, which in the end causes drains to clog,” he said, adding that Muar folks will also be taught as to how they can generate income from their used oils.

He said Muar having the most number of drainages also needs frequent cleanings and he will ensure this can be done to prevent flash flood incidents.

Syed Saddiq said that he will be working very closely with the relevant ministries and agencies to secure additional funding to address beach erosion issues.

“This is because Muar is said to be one of the cities which will be submerged under water in the next 30 to 40 years, if there are no long-term solutions,” he added.

On digitalisation of Muar, he said that the constituency is one which has received the most number of laptops and tablets for education, with more than 2000 devices being distributed to underprivileged youths, and that he aspires to continue the initiative.

“However, it is just not enough if we just focus on the distribution of tablets and laptops, if the internet access in Muar is still stuck. That is why in Parliament, I always raise issues of internet connectivity, especially when on paper, it was reported that Muar has already achieved 100 per cent 4G connectivity, but the reality is very different,” he said, adding that in areas such as Sungai Balang, connectivity is very poor.

Syed Saddiq said that the issue is a surface-level audit report that is not reflective of the actual coverage problem. He said that he will work with the Malaysian Communications and Multimedia Commission (MCMC) to ensure that the audit is done better.

“As a parliamentarian, I will also push so that more telecommunication towers can be built in the Muar parliament, especially in areas where the internet is always stuck, like in Sungai Balang for example,” he added.

Syed Saddiq said he will also work with small-time traders to improve the usage and literacy level on e-wallet.

Syed Saddiq who is Muar’s incumbent, will contest against Abdullah Husin who is the former Puteri Wangsa state assemblyman from Pas and Mohd Helmy Abd Latif from Umno.