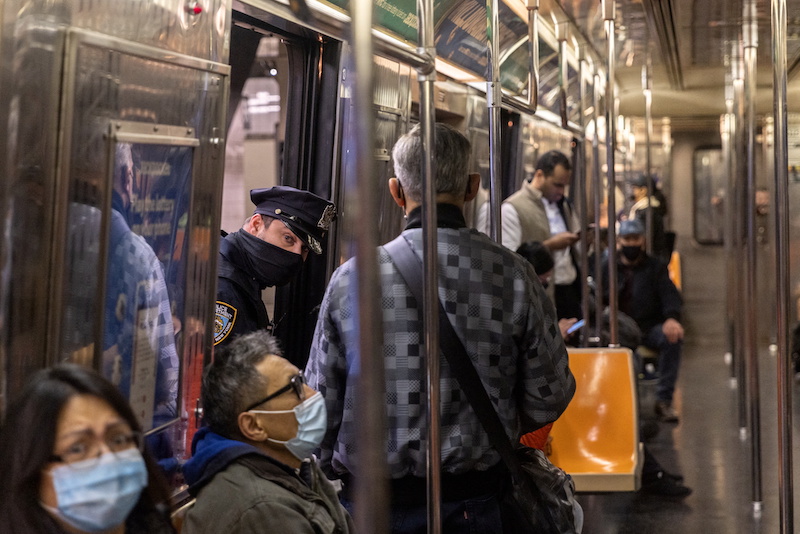 NEW YORK, April 13 –Police searching for the gunman who set off smoke bombs and shot 10 passengers in a New York City subway car said today that a man named as a “person of interest” was now considered a suspect–and the mayor vowed he would be brought to justice.

The attack occurred during yesterday’s morning commuter rush as a Manhattan-bound train pulled into an underground station in Brooklyn’s Sunset Park neighborhood. In addition to the 10 people hit by gunfire, 13 others were injured amid a panicked crush for the smoke-filled train’s exit.

It was the latest burst of violence that has plagued the United States’ largest city transit system and posed a major challenge for Mayor Eric Adams, who has sought to halt declining ridership during the Covid-19 pandemic.

The New York Police Department had initially identified Frank James, who it said had left keys to a rented U-Haul van at the crime scene, as a “person of interest.” Today, the NYPD said James was now a suspect in the mass shooting.

Asked if James acted alone, Adams told Fox News that a preliminary investigation did not turn up an additional person.

“The NYPD, federal agencies and state agencies are all collaborating together,” the mayor said. “I have confidence that we’re going to bring this suspect to justice and we want to make sure that we do it as expeditiously as possible,” Adams said.

Authorities say James rented the van in Philadelphia and parked it on a Brooklyn street near the 36th Street station where the incident unfolded. Police have offered rewards totaling $50,000 for information leading to his arrest.

Attempts by Reuters to reach any of the phone numbers associated with James were unsuccessful.

Five of the people shot yesterday were in critical but stable condition. All of the victims were expected to survive.

NYPD Commissioner Keechant Sewell said yesterday the shooting was not immediately being treated as an act of terrorism.

With the gunman still at large, New Yorkers commuting to work this morning said the violence would not deter them.

“You can’t let one person alter your life, gotta keep on, keep on going,” Michael Torres, a FedEx worker, told local news website Gothamist as he boarded a train at the 36th Street station.

There was no known motive for the attack, but investigators found a number of social media posts linked to an individual named Frank James that mentioned homelessness and Mayor Adams, Sewell said.

The attack began in the train car as it was about to enter the station, she added. The gunman removed two canisters from his bag and opened them, sending smoke throughout the carriage.

Police said the man then fired 33 rounds from a Glock 9 mm semi-automatic handgun, which was later recovered along with three extended-ammunition magazines, a hatchet, some consumer-grade fireworks and a container of gasoline. He then fled the scene.

New York has seen a sharp rise in violent crime during the pandemic, including a string of seemingly random attacks on the subway.

The transit violence has included a number of attacks in which passengers were shoved onto train tracks from platforms, including a Manhattan woman whose murder was seen as part of a surge in hate crimes against Asian Americans.

After yesterday’s incident, Adams pledged to double the number of officers assigned to subway security. He has prioritised increasing police patrols and expanding mental health outreach programs to combat violence.

The mayor told MSNBC today that the city was looking at new technologies for metal detectors that would keep New Yorkers safe while minimizing disruption.

“There are new models that are being used at ball games, ballparks, hospitals, where you’re not stopping to go through your belongings, you simply walk in through a device,” Adams said. Passengers would not “be aware that they’re walking past a device that could detect weapons”. — Reuters