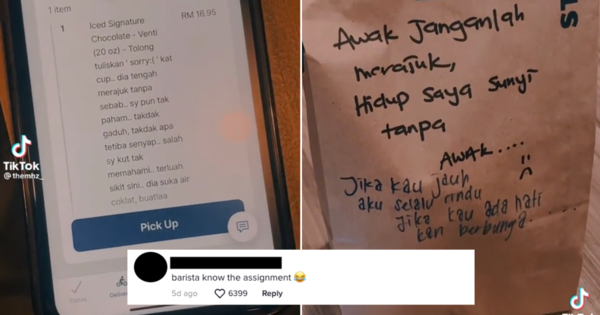 Having one of the toughest jobs in the world, service workers often deal with tough demands from their customers.

But one recent request by a customer has gone viral all over TikTok for the sweetest reason.

While the 10-second feature is rather unassuming at first glance, the video begins with the poster of the video, @themhz_, zooming in on an e-delivery order from an unidentified customer.

Upon reading the message, the order in place was for a venti-sized Iced Signature Chocolate drink from Starbucks. Following the order itself was a lengthy message by the customer, who lamented over his girlfriend icing him out that day.

The message communicated by the customer via the e-delivery service.
Image via @themhz_ (TikTok)

The TikTok then cuts to a visual of the takeaway bag — with similar sentiments of what the orderer expressed to the barista having been written on it.

Using a black marker pen, the message read, in translation, “Don’t sulk, my life would be so sombre without you. When you are far, I will always miss you. If you have a heart, it would blossom.” Being sure to include details, the barista also draws a sad face beside the message.

The complete message written on the takeaway bag.
Image via @themhz_ (TikTok)

The video has since garnered tonnes of attention, racking up over 700,000 views on TikTok, and 65,000 likes

A large amount of the comments gave the barista a pat on the back, going above and beyond his duties at Starbucks for a lovesick couple.

“He understood the assignment,” said one comment, while another commenter asked the user who posted the video to continue the effort by reading the message aloud to the girl if he were to see her.

Numerous people also called the barista a softy for making the effort to help the boyfriend out.

Comments by a few men added to the humour, with one man saying that ‘bros’ have each other’s back, and this was probably one of those instances.

“This is so funny, thank goodness the barista was sporting enough to do it,” wrote another.

A good share of women got in on the action too, joking around about themselves when they get moody.

“I don’t get this when I’m moody — at best it’s a little more attention [from my boyfriend],” said one girl. Another woman said that the barista probably understands what it’s like to have a moody girlfriend, too.

The person who shared the video admitted to being the delivery rider who transported the Starbucks order to the girlfriend. He mentioned in a comment under the video that everything is back to normal for the couple.

“Sorry, I haven’t had the chance to read the comments one by one. In continuation, the couple is okay now. Pray for us riders!” he concluded.

Once again, we at SAYS tip our hats to all service workers who go above and beyond their duty — in more ways than one!

Watch the full TikTok below:

One bus captain made sure all his passengers made it to the station safely during a torrential rain storm:

These McDonald’s workers got together and threw an awesome farewell party for their 87-year-old colleague: