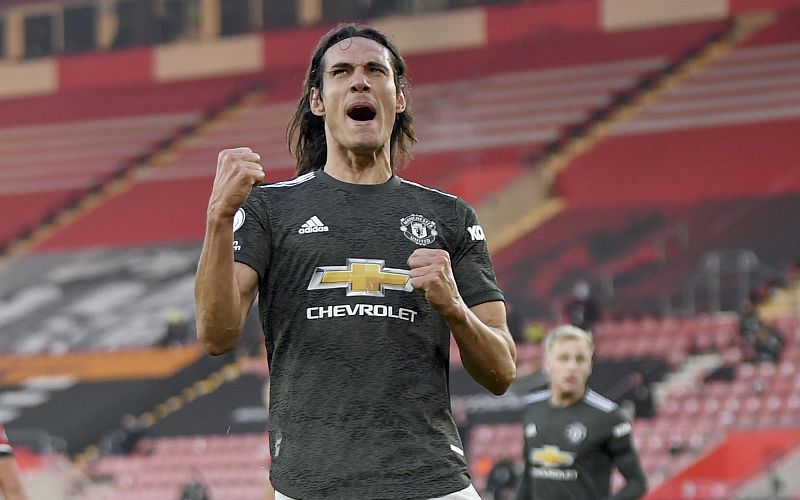 LONDON: Tottenham moved to the top of the Premier League with a goalless draw against title rivals Chelsea, while Edinson Cavani inspired Manchester United’s thrilling 3-2 win at Southampton on Sunday.

Jose Mourinho’s side climbed above previous leaders Liverpool on goal difference after a sterile London derby at Stamford Bridge.

In the day’s other match, Wolves won 2-1 at Arsenal despite seeing their Mexican striker Raul Jimenez taken to hospital after a nasty head injury.

Tottenham are unbeaten in nine league games and Mourinho seemed happy to frustrate his former club as they adopted a cautious approach with little attacking ambition.

“That was a game where we respected them and they respected us. Nobody gambled today or tried to change the direction of the game,” Mourinho said.

“I like the feeling of being top. We came from a difficult position last season and we are happy with that.”

Chelsea have not lost in their last 11 games in all competitions and sit in third place, two points behind Tottenham and Liverpool, who drew 1-1 at Brighton on Saturday.

“It went as I sort of expected. I thought we’d have a lot of possession. We created enough to win the game,” Chelsea manager Frank Lampard said.

“The clean sheet against a side set up to counter-attack, that was excellent. We didn’t give (Harry) Kane or Son (Heung-min) a sniff.”

Timo Werner thought he had put Chelsea ahead early in the first half with a superb finish, only for an offside flag to thwart the Germany striker.

Chelsea’s Mason Mount forced a good save from Hugo Lloris in the second half, while substitute Olivier Giroud should have done better than shoot straight at the Tottenham keeper in stoppage time.

The drab clash in west London was a stark contrast to United’s dramatic fightback from two goals down at St Mary’s.

Ole Gunnar Solskjaer’s side were facing a dismal defeat after first half goals from Jan Bednarek and James Ward-Prowse put Southampton in control.

But Uruguay striker Cavani sparked United’s escape act after coming on at the interval.

Cavani set up Bruno Fernandes to reduce the deficit and the former Paris St Germain star grabbed the equaliser from his teammate’s deflected shot.

The 33-year-old netted again in the final moments as his third goal since signing as a free agent in October extended United’s winning to four games in all competitions.

“Great impact of course. He is a No 9 who wants to be in between the posts, he is always on the move. I’m very pleased with him,” Solskjaer said.

“It was top movement and his timing is fantastic. His hunger to get on the end of things is the key for a centre-forward.”

It was exactly the kind of influential display Solskjaer was hoping for from Cavani when he moved for him after United’s failed pursuit of Borussia Dortmund’s Jadon Sancho.

Cavani is only the second player to be directly involved in three goals in a Premier League game after coming on as a substitute for United since Solskjaer scored four against Nottingham Forest in 1999.

“It is a trait of Manchester United to never give in. Every single one of them, there was absolutely no chance they were going to give up,” Solskjaer said.

Luiz was cleared to resume play, but Jimenez had to go to hospital, with reports claiming he was conscious and responding to treatment.

Daniel Podence’s cool finish clinched it for Wolves in the 42nd minute, leaving Arsenal languishing in 14th place after a three-match winless run.