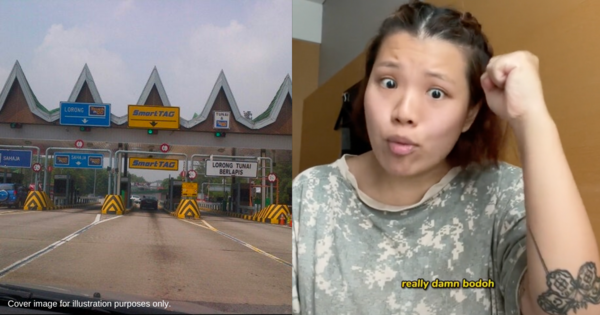 A Singaporean TikToker recounted a story about overpaying RM200 at a Malaysian expressway, but it doesn’t end in them realising they had gotten scammed

On 5 November, Nicole Chen, better known online as Nicole Liel, detailed how the incident went down in a short TikTok clip.

During a trip to Melaka with a group of reporters, they travelled down an undisclosed expressway in Malaysia. Eventually, they reached a toll booth, and realised to their dismay that they had forgotten their Touch n’ Go card.

Comically hailing herself a “problem solving content creator”, the 24-year old Nanyang University graduate came up with the idea to ask to borrow a Touch n’ Go card from the car behind them.

After scanning the card, her colleague returned it to the driver.

However, things took a surprising turn when her colleague revealed that she had passed the driver RM200.

Chen later realised there had been a misunderstanding. The driver stated RM200 as the balance of his Touch n’ Go card while he was handing it to her colleague

In the moment, she was flabbergasted, thinking to herself, “Did we just pay RM200 for the Malaysian equivalent of an ERP?”

FYI, ERP is the Singaporean equivalent of Malaysian tolls.

To illustrate this absurdity, she used an equally absurd analogy. According to Chen, if chicken farmers in Malaysia who export and import chickens to and from Singapore are required to pass through five tolls, with each costing RM200, then these farmers would have to cough up a whopping RM1,000 for a one-way trip.

Later, and to her disbelief, another colleague chimed in and confidently claimed the toll was actually RM50.

To Chen, this was “still damn a lot of money”. She later realised that her colleague must have come to this number because of that was the balance was shown on the toll’s screen after the car ahead of them left the toll booth.

After the second (albeit less financially damning) misunderstanding, her colleague rushed out of the car to reclaim RM150 from the driver she had given RM200 to. This still left them RM50 poorer, however.

Even though the “math [was] not mathing”, the group of Singaporeans went on their merry way.

But the story doesn’t end here.

After driving for some time, they reached a pit stop, where they realised the driver had been trailing after them the whole way

Thanks to him, the group finally realised that the cost of the toll was a mere RM4 — an amount he refused to accept payment for, even though he went very much out of his way to return their money.

According to Chen, on top of the lengthy time spent driving after the group, he was doing so at their speed of only 90km/hr — slow by Malaysian expressway standards.

Watch Chen recount her experience in the TikTok below:

Check out these other acts of kindness from our fellow Malaysians: