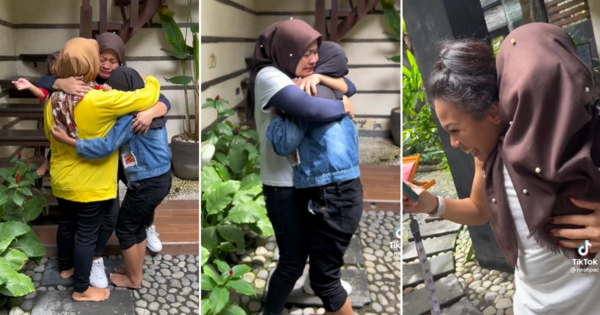 Housemaids and helpers often take on an impossible task — by leaving their own families to help take care of other families.

Making a home for themselves in a foreign land, one helper was given a surprise by her employers that she’ll never forget.

A recent TikTok that was published a few days ago is making waves all around the world of a husband and wife duo giving their beloved helper the surprise of a lifetime.

Theinesh Pac and Denezia Beins have a deep appreciation for their helper, simply referred to as Zulae. Having been with their family since 2019, she has not been able to go back to her home country of Indonesia to see her family for three long years.

Planning the surprise of a lifetime and documenting these precious moments in a video on TikTok, the couple shared their masterplan of reuniting Zulae with her family.

Posted to Theinesh’s account, the video begins with the couple expressing their gratitude for Zulae, for all that she has done for them

“It has been three years since our helper saw her family and her daughter,” the caption across the screen read. “She’s been so good to us and our kids, so we decided to surprise her on our Bali trip and flew her sister’s family and daughter in to join us.”

Putting together every moment meticulously, the first 30 seconds of the video show Beins and Theinesh making it to the airport for their flight, touching down in Bali, Indonesia, and checking into their hotel.

Beins is even seen showing the “shhh” sign to the camera as they approach the hotel.

Bursting into tears, Zulae can hardly believe her daughter and sister are in front of her. Holding them tight, she gives them both a big hug, after three years of not seeing them physically.

Zulae then approaches Beins and gives her a hug, thanking her profusely for bringing her family to Bali.

The most heartwarming part? When Zulae embraces her daughter without letting her go, smothering her in kisses.

The rest of the video continues with Zulae’s family joining Beins and Theinesh’s family for the holiday, which included walks on the beach and a fun day at the Tegenungan Waterfall.

Joy overwhelmed the comments section, with hundreds of people sharing in the beautiful reunion, praising Beins and Theinesh for their kindness

From referring to them as angels to celebrating the couple for their big hearts, one commenter, who happens to be a helper herself, said how touched she was by their generosity.

In a conversation with SAYS, we found out that the couple lives in Singapore, while Beins herself is Malaysian, originally from Melaka

“Being a mother myself, I know it isn’t easy being away from our kids,” said Beins to this SAYS writer. After the borders opened following the COVID-19 pandemic, Beins noted how she asked Zulae to return to Semarang, Indonesia, to visit her family. However, she declined, saying that she would go back in 2023 instead.

“So I took this opportunity to plan her birthday surprise in Bali!” she continued. Beins further mentioned that October is Zulae’s birthday month, making the holiday more joyous by having her family together for the occasion.

Nevertheless, Beins did mention how surprised she was by the magnitude of people who have viewed the TikTok, with blessings and love coming from all over the world. “I told Zulae she is popular and all over the news now.”

Closing out our conversation, Beins graciously articulated her care for Zulae, “My husband and I work hard for our family. Zulae helps at home with our kids to enable us to do so. It’s the least we can do. We are thankful and blessed to be able to surprise her.”

The couple with their children and Zulae’s family in Bali, Indonesia.
Image via Denezia Alessandra Maryanne Beins (Provided to SAYS)

With memories that will last a lifetime, the couple have proven that not all families are bound by blood.

Watch the full TikTok below:

@neshpac We have been so lucky to have her assist us with our growing family and maintain the sanity at home since 2019. Thanks kakak! #reunion #bali #seminyak #family #fypviral Motivational music(792528) – Draganov89

Here are some touching reunions that’ll have you bawling: