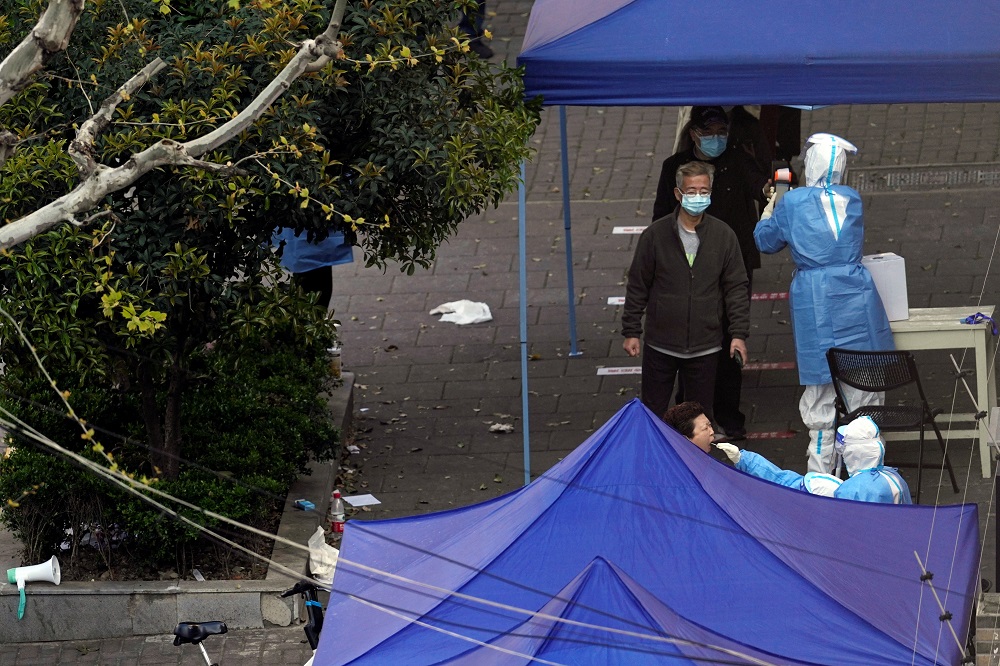 Residents line up for nucleic acid testing at a residential area, during the second stage of a two-stage lockdown to curb the spread of the Covid-19 in Shanghai, China April 4, 2022. – Reuters pic

SHANGHAI, April 8 — Shanghai on Friday announced a record 21,000 new cases and a third consecutive day of Covid testing as a lockdown of its 26 million people showed no sign of easing and Chinese cities tightened curbs — even in places with no recent infections.

Beijing intervened in Shanghai after the failure of its slice-and-grid approach, and insists that the country stick to its elimination approach to Covid, which it says is essential to keeping death rates low and preventing its medical system from breaking down.

Local authorities across China, which mostly managed to keep Covid at bay for the last two years, are stepping up coronavirus control measures, including movement restrictions, mass testing and new quarantine centres.

Cities that jumped into action this week included Zhengzhou, in central Henan province, which on Thursday said it would test all 12.6 million residents after finding a few asymptomatic cases in recent days.

Beijing has strengthened regular screening for employees in the city’s key sectors, requiring all staff at elderly care agencies, schools and institutions handling imported goods to take tests at least once a week.

In Shizong county in southwest China’s Yunnan province, shops were shut, transport suspended and residents barred from leaving their towns or villages after an asymptomatic person returned home from Shanghai and infected a household member.

Nomura this week estimated that 23 Chinese cities have implemented either full or partial lockdowns. The cities collectively are home to an estimated 193 million people and contribute 22 per cent of China’s GDP. These include Changchun, a major manufacturing hub that has been locked down for 28 days.

Ernan Cui, an analyst at Gavekal Dragonomics who studies Covid policies announced by China’s 100 largest cities, said most were choosing to keep restrictions in place even after case numbers returned to zero.

“The extremely widespread Covid restrictions beyond Shanghai, and the risk-averse attitude of both central and local government officials, suggest that the economic impact of the various lockdowns will not ease in a matter of days or even weeks,” she said in a note.

Stories of crowded and unsanitary central quarantine centres and fears of family separation have driven calls for home quarantine in Shanghai and for China to review its “dynamic clearance” approach.

Although the government has not acceded to these requests, it has started allowing some close contacts to isolate at home and on Wednesday eased its policy of separating infected children from their parents. It is also transferring some patients to neighbouring provinces.

However, food supply remains a concern with residents, due to a shortage of couriers.

Shanghai has not indicated when it may lift its lockdown.

Late on Thursday, Wu Zunyou, chief epidemiologist at the China Center for Disease Control and Prevention, said on its Weibo account that action taken in Shanghai had to be “thunderous” to cut off the chain of transmission.

In theory, he said, if multiple rounds of PCR testing were conducted in mega-cities with populations as large as 27 million within 2-3 days, they could reach zero cases “on the community level” within 10 days to two weeks.

“As long as these measures are implemented well, our country’s severe coronavirus epidemic situation will soon improve,” Wu said. — Reuters