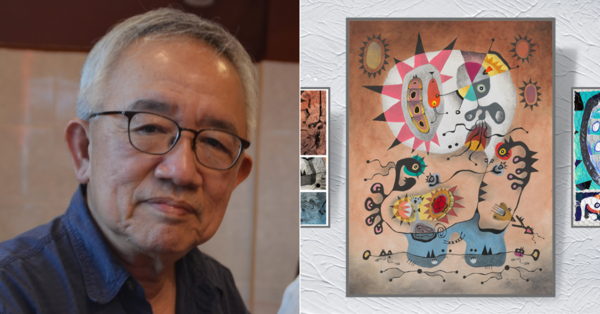 Until recently, all his works were shown only to family and a few close friends. In 2018, he began to distribute them to a wider audience — by posting his pieces on social media.

He also created four limited-circulation PDFs that included writings on matters close to his heart. From 2018-2020, he continued to put together his older works, resulting in four more sets of PDFs.

Image via Jin’s Art & Other Expressions

Here are the event details:

Venue: A Place Where by APW, Bangsar

“In early 2020, a rather serendipitous act of picking up some old sketches and unfinished works reignited my enthusiasm. I kept going since and have produced about 200 paintings and digital-analog creations, including the nine series showcased at this exhibition,” said Lim Siang Jin.

The first three series in the exhibition — Restart 2020: Continuation and Change, Excerpts from a Doodle, and Schticks — are the ‘continuation’ arising from old doodles and sketches that have been refreshed and brought to new life.

The subsequent six series — Unconnected, Adventures with Acrylics, Exaggerated Stills, Fear and Hope in Covid Times, Back to Black, and Evocative Durian, Mystifying Durian — represent the ‘change’ where new ideas were formed, resulting in newer creations, especially the digital-analog pieces.

The highlight of the exhibition is the Evocative Durian, Mystifying Durian series, which comprises acrylic-and-ink original paintings with ‘derivative’ prints

One of the pieces in the ‘Evocative Durian, Mystifying Durian’ series, titled ‘Bickering Over Durian’.
Image via Jin’s Art & Other Expressions

Believing that feelings and thoughts surrounding durian are an enigma, Lim Siang Jin adequately represents them in his art by combining painting, working on the computer (using Adobe Photoshop and photography, amongst others), and writing in a manner that enhances the integrated wholes. In this way, he also bridges the digital-analog gap that is now prevalent in art.

In creating the ‘derivatives’, Lim Siang Jin uses props such as glass, translucent plastic, and chicken wire netting. These are the ‘analog’ aids to help him distort the various segments of the paintings, to give the artworks a subdued yet powerful, intense, and mystifying feel — emotive elements that represent his thoughts and feelings surrounding the fruit.

With titles such as Bickering Over Durian, The Gaze Among Thorny Distractions, and Above The Fray, the illustrations in the series evoke and mystify the heart and mind.

Besides the durian series, another noteworthy digital-analog experiment can be found in the Back to Black series

Some of the pieces in the ‘Back to Black’ series.
Image via Jin’s Art & Other Expressions

It involves rectangles that are the amalgam of three elements: black-and-white small rectangular doodles, photos of rain tree canopies, and colours from a masterpiece, e.g. by Picasso. The resultant forms are then put together to form a Warhol-like piece.

All the other series at this exhibition are equally eye-catching, consisting of interesting doodles, vibrant colours, gimmicky lines, and abstract shapes of ordinary day-today items and scenes.

Visitors to the exhibition will be able to appreciate these finer details when viewing the pairings of original paintings with their digital-analog prints. For example, The Unconnected series would entice a visitor to figure out what the pot-bellied man is doing.

Ee Soon Wei, CEO of A Place Where by APW, said, “I am thoroughly glad to be given an opportunity to present Siang Jin’s first solo exhibition as an artist”

“There are many layered connections — from space, people, and work itself — to see how APW as a space continues to push boundaries creatively and collectively. Siang Jin’s work integrates this likely persona very well — deep in curiosity with his thoughtfulness in narrative.

“I’m grateful to be doing this together after coming out from the long extended pandemic. This exhibition brings meaning and importance of ‘purposeful togetherness’ — where both space and art intersect,” he added.

Be sure to mark your calendars to check out Restart 2020: Continuation & Change, Biographical Expressions by Lim Siang Jin!

Read more about his art and other biographical expressions on his website.