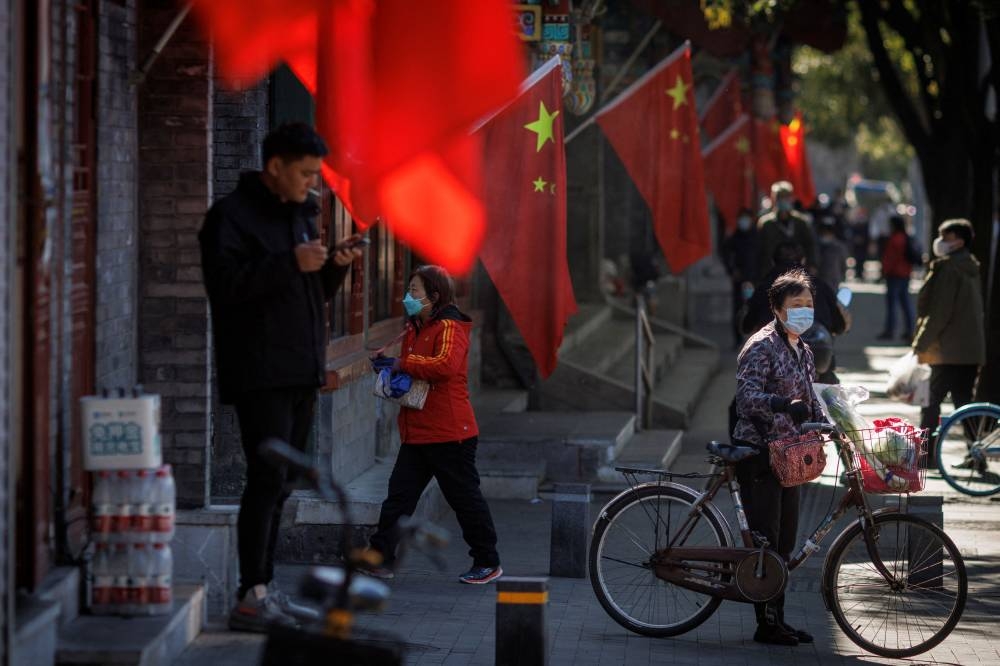 BEIJING, Oct 11 – Beijing has stepped up security and Covid curbs and decorated the capital Beijing with red political banners as it gears up for a Communist Party congress where President Xi Jinping is poised to become China’s most powerful leader since Mao Zedong.

The 20th party congress, which opens on October 16, occurs every five years and brings together 2,300 party members, mostly behind closed doors, at the vast Great Hall of the People on Tiananmen Square.

Beijing has hired extra security personnel, according to procurement tenders, including 42 guards to keep 24-hour watch on “key people”, a term authorities use to describe individuals deemed to be troublemakers, from October 6-23.

This week, dozens of additional security personnel stood at regular intervals along Chang’an Avenue, the main east-west road through the centre of Beijing.

Shops that provide photocopying services have been told to deny service to petitioners, who tend to gather in Beijing when it holds important meetings.

An employee at one photocopy shop near Tiananmen said he had stopped more than 10 people who tried to print petitions or court documents about conflicts with the government or state-owned companies.

“I would be in hot soup if I let them print from my shop,” he told Reuters, declining to be named as he is not authorised to speak with foreign media. “We’ve been told to be extra alert this month,” he added.

But it is enforcement of China’s zero-Covid policy as the country battles numerous outbreaks that is most irritating many Beijing residents. Numerous residents have been prevented from returning to the capital after the recently-concluded October “Golden Week” holiday.

China’s Twitter-like Weibo has been flooded with complaints from users claiming they were unfairly hit by Covid “pop-up windows” on their smartphone health apps which require a positive PCR test to be cleared and allow unrestricted mobility.

One hashtag about Beijing “pop-up windows” started on October 5 and generated over 12 million views by today. At least one similar hashtag was censored.

“I’m a pregnant woman that has done nothing. This pop-up window has delayed my pregnancy check in Beijing. How can people live like this?” user monianOPQ wrote yesterday.

In May, Xi called out critics of China’s zero-Covid policy amid widespread anger at a months-long and often chaotic lockdown in Shanghai, China’s most populous city. A lockdown in Beijing during Congress would be an even larger dent on Xi and the Party’s unwavering commitment to zero-Covid.

Besides the Covid “pop-up windows”, Beijing authorities recently introduced a series of measures to show their commitment to keeping the Congress virus-free, from reinforcing Covid monitoring teams at key airports and railway stations to increasing the frequency of Covid testing for office workers.

Red banners with slogans written in a large white font have been placed on bridges overlooking major thoroughfares in Beijing. One reads: “Closely unite around Comrade Xi Jinping as the core of the Party Central Committee.”

Xi is widely expected to break with precedent and win a third term as party general secretary, China’s most powerful post, securing his place as the country’s most powerful leader.

As authorities seek to avoid any potential risk ahead of the big event there were signs that certain services in the capital were being curtailed.

“You cannot send out certain packages from Beijing and won’t be able to receive certain packages coming from outside of Beijing at the moment due to the Party Congress,” a delivery worker at SF Express, a major Chinese courier firm, told Reuters late last month. SF Express did not immediately respond to a request for comment.

A banker, who declined to be named due to the sensitvity of the matter, told Reuters that applications for new financial products or businesses were on hold ahead of the Congress.

“If you want to apply for a new product, or if you want to upgrade a new system in October, that’s all suspended,” the banker said.

“Regulators would tell you that new products involve risks (and say) ‘Couldn’t you just wait for another 30 days?'” – Reuters