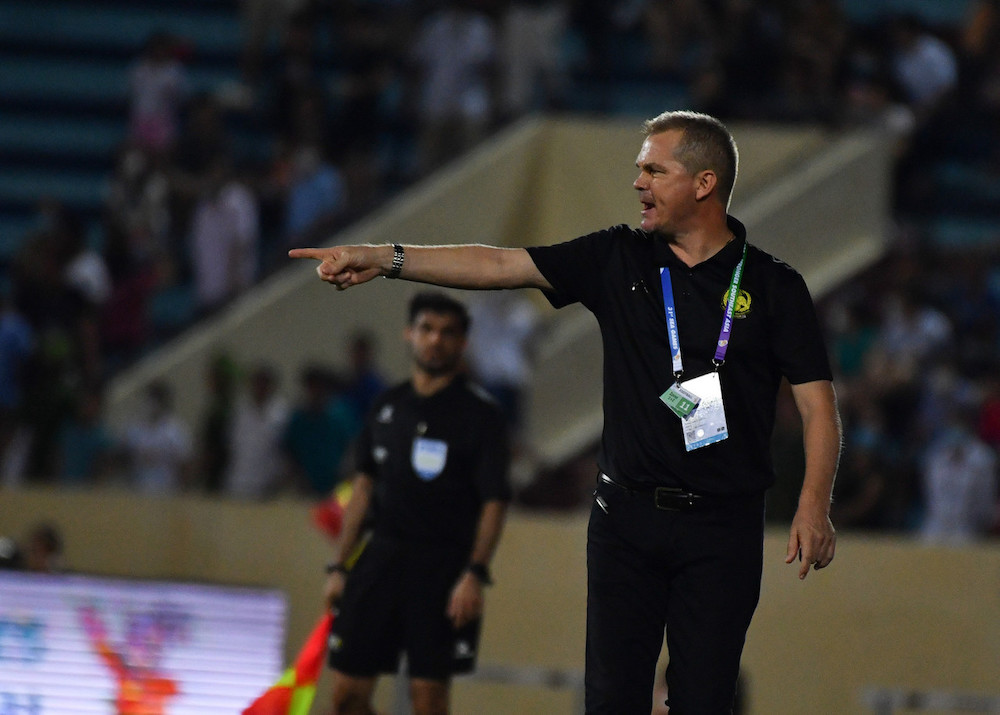 National under-23 squad head coach Brad Maloney during the match against Laos in Nam Dinh May 11, 2022. — Bernama pic

HANOI, May 17 — Malaysia are prepared to spring a surprise on Vietnam in the 31st SEA Games men’s football semi-finals, as part of their mission to end an 11-year title drought by snatching the “mother of all medals” in the biennial games.

Chief coach of the national Under-23 squad, Brad Maloney, is confident that his charges would not be intimidated by Vietnam, who are coached by the fearsome South Korean, Park Hang Seo.

He said it is a norm that no success would come easy in any competitions.

“To win this tournament you must face the best teams at one time or another. Of course, the hosts will be a very difficult opponent, but my players have shown that they are not afraid to face anybody,” he said when contacted by Bernama here today.

Group A champions Vietnam will play Group B runners-up Malaysia at the Viet Tri Stadium in Phu Tho province on Thursday.

However, Maloney admitted that Malaysia should be wary of Vietnam as Hang Seo is a respected tactician.

“He has had an excellent record with this nation since his appointment, and his teams are always very competitive, both physically and tactically,” he said.

Maloney said he was not disappointed with his squad for letting slip the opportunity to be group champions, saying they had shown their domination by remaining unbeaten in all four matches.

In fact, the 50-year-old Australian-born coach said the team did well by booking their semi-final ticket early, allowing several key players to be rested in the final group match against Cambodia yesterday.

This Thursday’s clash is a repeat of the 2005 semi-finals in the Philippines which saw Vietnam winning 2-1, leading to Malaysia settling for the bronze by beating Indonesia 1-0 in the third placing playoff.

In fact, Malaysia also lost to Vietnam at the same stage in the 2003 edition here, losing 3-4 and then going on to win bronze after beating Myanmar.

However, Malaysia avenged these two defeats by edging Vietnam 1-0 in the final of the 2009 Games in Laos.

The last time Malaysia won gold in men’s football at the SEA Games was at the 2011 edition in Indonesia when coached by Datuk Ong Kim Swee.

Malaysia’s best achievement after that was finishing runners-up in 2017 in Kuala Lumpur, also under the guidance of Kim Swee, before they were knocked out at the group stage in the Philippines in 2019.

The other semi-final on Thursday pits Group B champions Thailand against Group A runners-up Indonesia at Thien Truong Stadium in Nam Dinh province. — Bernama