Sarawak Man Wins RM14.3 Million Lottery With Numbers From Old Couple He Once Took Care Of 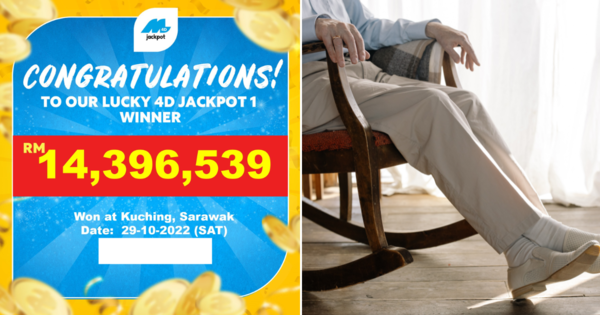 Good karma comes to those who deserve it, and one man just may have had the win of a lifetime

Lottery corporation Magnum4D recently released a post on their Facebook page congratulating a lucky winner for their Lucky 4D Jackpot prize, who bet his numbers at a station in Kuching, Sarawak.

Headlining the post as ‘Weekend Winner Alert’, the post read, “Shout out to all Kota Sentosa, Kuching people! Check your tickets now — a life-changing experience could be awaiting you! We have a lucky winner who just won RM14 million in tonight’s draw!”

With the official date of the winning prize announced on 29 October, it was revealed that the undisclosed winner won RM14,396,539 to be exact.

Shortly after this news was revealed, Chinese media publication Kwong Wah Daily had a chance to speak to the winner

Without revealing his identity, the man did disclose that he usually bets his favourite numbers at the betting station in Kota Sentosa, about RM20 each time. In the interview, he expressed gratitude over winning the pot, with his win signifying a dream come true.

“I didn’t expect such a lucky day would be ahead of me,” he explained. “I normally watch the live lottery results through the MyMagnum app, and when I saw that my lucky numbers were the first and third prize [respectively], I could not believe it! When I reconfirmed and verified my winning results, I realised I had just become a millionaire!”

In a stellar turn of events, it was revealed that the man had successfully won two prizes within the 4D Classic game, the first prize with his number 8239, and the third prize with 3336. Bagging a two-in-one outcome, this man’s luck was at its all time peak for this win.

The official ticket by the winner.
Image via Kwong Wah Daily

Despite his big win, the man went on to explain the sweet inspiration behind the two numbers he bought, leading all the way back to his youth

“I used to work as a technician back in the day, and rented a house from an elderly couple. They were old and quite ill, so I took it upon myself to care for them, even taking them to the hospital when they needed it. It was out of compassion, they were just like my parents,” the man explained.

At the time, he recalled the old car they used to drive with the number plate 8239. “I always felt like that was a lucky number, so I’d bet on it all the time,” he continued.

As for 3336, the man detailed how he received that number from a Buddhist temple in KL he visited a few years ago.

Image for illustration purposes only.
Image via Matthias Zomer/Pexels

Showing that good karma goes a long way, the 40-year supporter of the Magnum4D games was forthright about how much this money meant to him. “This year has been another difficult year for me, but now, this money will help me start my life all over again.”

When asked how he plans to use his winnings, the man stipulated that he will donate part of it to charity first, before sharing a sum with his family. He also said that he’d deposit the balance in his bank.

Thanking Magnum4D, the man is optimistic and looking forward to his future.

One man in India explained why he regrets winning a RM14 million jackpot:

This Johor woman won millions from the lottery after a RM2 bet:

These people wore funny disguises to collect their lottery winnings so people wouldn’t recognise them: