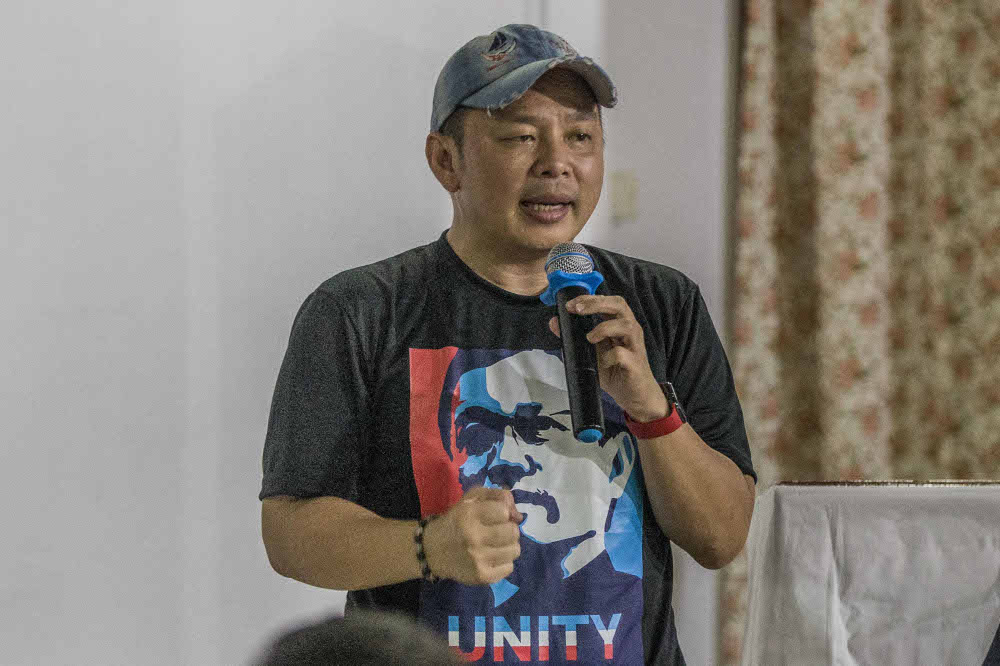 Parti Warisan Sabah deputy president Datuk Darell Leiking acknowledged the argument that there was a review of the Article in 1969 but said Sabah would still be dissatisfied until the 40 per cent is honoured. — Picture by Firdaus Latif

KOTA KINABALU, April 15 – While most Opposition leaders in Sabah are glad that the Federal and state government has reached an agreement over the annual Special Grant amount, some are still questioning Putrajaya’s reluctance to pay the original 40 per cent as stipulated in the Federal Constitution.

Parti Warisan Sabah deputy president Datuk Darell Leiking said that while the latest deal is decent, it is still short of honouring the Malaysian Agreement 1963.

“It is a good move but we should address the actual 40 per cent formula as stated in Article 112C of the Federal Constitution. The 40 per cent net revenue must eventually be returned — that’s the constitutional formula,” he told Malay Mail.

Leiking acknowledged the argument that there was a review of the Article in 1969 but said Sabah would still be dissatisfied until the 40 per cent is honoured.

“Why not honour the original agreement? Even though there was a gazette from 1969 to 1973, it didn’t result in an amendment to the Federal Constitution. Since there is no amendment, then it is only right we just abide by the Constitution,” he said.

Yesterday, Prime Minister Datuk Seri Ismail Sabri Yaakob and Sabah chief minister Datuk Seri Hajiji Noor announced that they had come to an agreement that the federal government would pay RM125.6 million more than quadruple the current amount of RM26.7 million which has been the practice for some 48 years and that it would be increased every year until 2026.

Both sides had also agreed to engage in negotiations for Sabah’s demand of a 40 per cent return in revenue and a Special Grant as stipulated in Article 112D.

United Progressive Kinabalu secretary-general Nelson Anggang also said that the new announcement today could be argued as infringing the constitutional right of Sabah.

“Does the federal government acknowledge that the 40 per cent formula is still applicable? It is a very crucial matter because it was said by Finance Minister [Datuk Seri] Tengku Zafrul Abdul Aziz that the formula is no longer applicable. “Now that would be a very worrying and dangerous stand or interpretation of the Federal Constitution from the federal government,” he said.

Anggang also questioned the basis of the 4.7 fold increment and whether it could be argued that Sabah was conceding its entitlement which will set a new precedent for future reviews.

“The statement said that within the five years from 2022 to 2026 the federal and state government can still negotiate on the amount, but if this is a review pursuing article 112D, then the next review can only be made after five years. On what basis can the Sabah government compel the federal government to further negotiate for any further review within these five years?” he asked.

He said that if both governments do not come to an agreement on whether the 40 per cent formula is still applicable, then there was a constitutional issue at hand.

He also said that to give the full context for understanding, the federal government should disclose the total net revenue obtained annually from Sabah so that Sabahans can understand and appreciate what the 40 per cent entitlement means.

“We have no idea because the federal government has never disclosed this information to Sabah. And now the finance minister said in Parliament that the 40 per cent formula is no longer applicable. Is it to avoid disclosing to Sabah the total revenue they have collected from Sabah annually?” he questioned.

He said that the review in 1969 had seen a seven-fold increment, which is in stark contrast to the current 4.7 fold.

“It’s like, in 1970 the price of ice cream is 50 cents, the same ice cream now- after inflation, etc would cost RM2. But the federal government is telling Sabah, look I know I should be paying RM2, But I will still continue to pay you 50 cents because I can since there was no review made in 1974 and every five years subsequently.

“It is clearly unfair,” he said.

Meanwhile, DAP’s Kota Kinabalu MP Chan Foong Hin acknowledged that the RM125.6 million was a positive development, and even higher than what the Pakatan Harapan had planned to pay which was as Leiking said – initially double the sum to RM53.4 million to RM106.80 million in another five years’ time.

Chan, a Central executive committee member, said although the state had lost the opportunity costs of the last two years, the big issue now was how the state government plans to utilise the Special Grant following the announcement.

“How do they ensure that the allocation will be felt by the people? Given our imbalance development across the South China Sea.

“Why should the state government continue to impose business-unfriendly policy on our own business sectors? Such as collecting scrap metal export tax, seafood tax, when we can negotiate and demand more from the federal government, why should GRS oppress our own people by killing the goose that can lay down the golden eggs?” he asked.