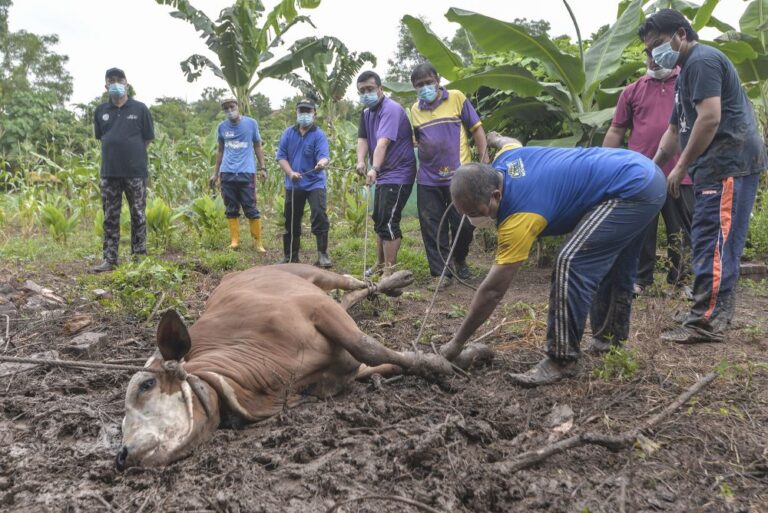 Malaysian Muslims get a cow ready for slaughter during Hari Raya Aidiladha celebrations in Putrajaya August 31, 2020. — Picture by Shafwan Zaidon

KOTA KINABALU, June 24 — The Sabah government has allowed the Aidiladha prayer and korban (sacrificial rites) to be performed during the movement control order period, subject to the standard operating procedures (SOP) to curb the Covid-19 pandemic.

State Local Government and Housing Minister Datuk Masidi Manjun said for the Aidiladha prayer, the congregation was limited to one-third of the total capacity of the prayer area or 50 people, whichever is lower, and congregants must complete both doses of their vaccine shots and comply with other conditions stipulated by the state religious authority, subject to the current Covid-19 situation.

The sacrificial rites were allowed except for areas placed under the enhanced movement control order and depended on approval from the state authorities based on the advice from the Health Ministry and the National Security Council.

“The sacrificial rites must be held at slaughterhouses, licensed private ruminant slaughterhouses, in addition to mosque or surau compounds and open areas such as community hall, with approval from the relevant authorities.

“The number of animals to be slaughtered at mosque and surau should not exceed five a day except for goats (10),” he said in a statement last night.

Masidi, who is the state government spokesman on Covid-19, said only 20 people who have completed both doses of the vaccine shots and healthy were allowed to be involved in the activity, and the korban meat are to be distributed from house to house.

Meanwhile, he said a total of 129 new Covid-19 cases were reported today which brings the cumulative number of positive cases in the state to 68,029, with 338 recoveries and seven fatalities. — Bernama