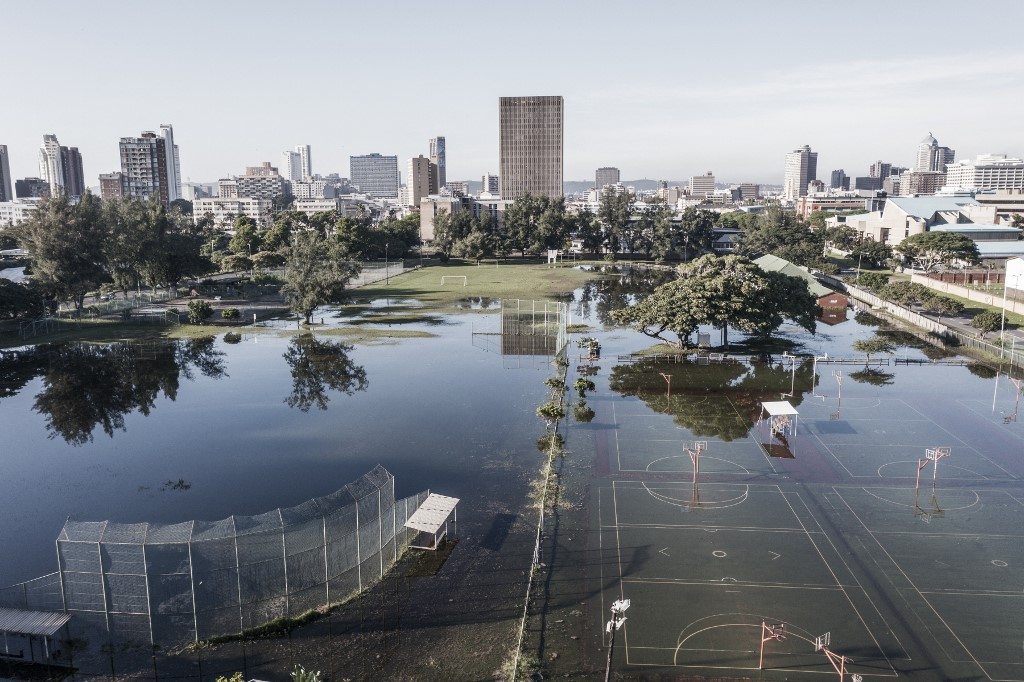 The “unprecedented” floods, which affected nearly 41,000, left a trail of destruction and at least 395 people dead.

“Sadly the number of fatalities continues to increase with the latest figure standing at 395,” regional head of the disaster managing ministry Sipho Hlomuka said in a statement.

With the government coordinating the search-and-rescue operation, the official number of people missing in KwaZulu-Natal province stood at 55.

A fleet of cars and helicopters carrying police experts set out early Friday to comb through a valley in Marianhill suburb, west of Durban, to look for 12 people reported missing in the floods, AFP correspondents said.

It is an increasingly desperate search for survivors.

Travis Trower, a director for the volunteer-run organisation Rescue South Africa, said his teams had found only corpses after following up 85 calls on Thursday.

President Cyril Ramaphosa — describing the floods as “a catastrophe of enormous proportions… not seen before in our country” — urged Good Friday prayers for survivors.

“Let us pray for our people in KwaZulu-Natal so that they receive the healing that is required… so that they can get on with their lives,” he told El-Shaddai Tabernacle church congregants in the eastern town of Ermelo.

Thousands of survivors, left homeless after their houses were destroyed, are being housed in shelters scattered across the city, sleeping on cardboard sheets and mattresses laid on floors.

Meanwhile volunteers, with gloves and trash bags, fanned across the city’s beaches to pick up debris left by the massive storms ahead of an expected surge of Easter weekend holidaymakers.

Software manager Morne Mustard, 35, was among the scores of volunteers, who included children, picking up debris and broken reeds from Durban’s famous Umhlanga beach.

“This is my local beach where I bring my kids, and this is where we spend our weekend, so this is for our community,”.

He roped in workmates, families and friends to help clean up as beach restaurants offered free breakfast for the volunteers.

Recalling the day the rain fell, Mustard said, “It didn’t feel real, absolute devastation, a horrendous sight, stuff spilling out on the beach must have come from someone’s house… brooms and mops, household utensils, it was such a heart sore to see.”

Some of Durban’s poorest residents have lined up to collect water from burst pipes and dug through layers of mud to retrieve their scant possessions.

Ramaphosa declared the region a state of disaster to unlock relief funds.

Weather forecasters said apocalyptic levels of rain were dumped on the region over several days.

Some areas received more than 450 millimetres (18 inches) over 48 hours, or nearly half of Durban’s annual rainfall, the national weather service said.

The South African Weather Service issued an Easter weekend warning of thunderstorms and flooding in KwaZulu-Natal.

“According to the warning that we have received, damaging winds are forecast for areas along the coast from midday (Friday) into Saturday evening,” said Hlomuka, adding disaster teams were on “high alert”.

Over 4,000 police officers have been deployed to help with relief efforts and maintain law and order amid reports of sporadic looting.

The country is still struggling to recover from the two-year-old Covid pandemic and deadly riots last year that killed more than 350 people. — AFP