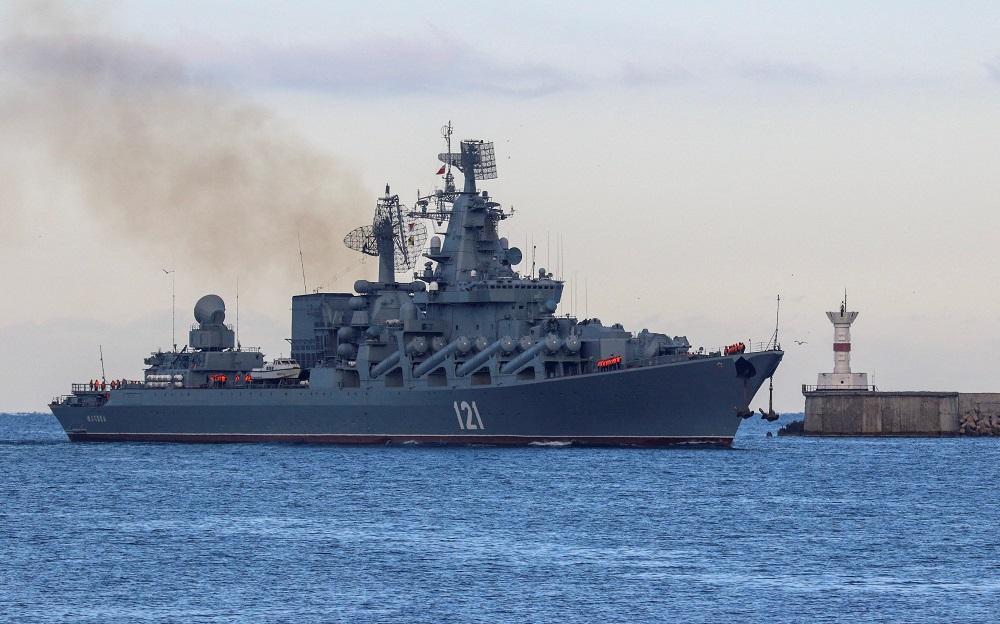 The Russian Navy’s guided missile cruiser Moskva sails back into a harbour after tracking Nato warships in the Black Sea, in the port of Sevastopol, Crimea November 16, 2021. – Reuters file pic

ODESSA, April 15 — Russia’s Black Sea flagship sank Thursday after an explosion and fire that Ukraine claimed was a successful missile strike — as the Kremlin accused Kyiv of targeting its citizens in sorties across the border.

The guided missile cruiser Moskva had been leading Russia’s naval effort against its neighbour in the seven-week conflict, in which civilian killings have sparked accusations of genocide.

Russia’s defence ministry said the blast on the vessel was the result of exploding ammunition and added that the resulting damage had caused it to “lose its balance” as it was being towed to port.

“Given the choppy seas, the vessel sank,” the Russian state news agency TASS quoted the ministry as saying.

On the Ukrainian side, Odessa military spokesman Sergey Bratchuk said the ship had been hit by domestic Neptune cruise missiles.

In Washington, Pentagon spokesman John Kirby said he was unable to verify either version, but stressed that the sinking of the Moskva dealt a “big blow” to the Black Sea fleet.

Meanwhile, in Ukraine’s east and south, civilian evacuations had been set to resume Thursday, Deputy Prime Minister Iryna Vereshchuk said, after a day-long pause that Kyiv blamed on Russian shelling.

More than 4.7 million Ukrainians have fled their country in the 50 days since Russia invaded, the United Nations said.

The flagship fire came after the United States unveiled an US$800-million (RM3.4 billion) military aid package that includes heavy equipment specifically tailored to help Ukraine repel the Russians in the east, from howitzers to armoured personnel carriers and helicopters.

Following its pullout from northern Ukraine earlier this month after failing to take the capital, Russia is refocusing on the east, with Kyiv warning of bloody new clashes to come in the Donbas region.

‘No electricity, no water’

Seizing Donbas, where Russian-backed separatists control the Donetsk and Lugansk areas, would allow Moscow to create a southern corridor to the occupied Crimean peninsula.

But rain that has been battering the region for days could favour Ukraine in its fight against invading Russian forces, a senior Pentagon official said Thursday.

“The fact that the ground is softer will make it harder for them to do anything off of paved highways,” said the official, who spoke under condition of anonymity.

Moscow’s Black Sea fleet has been blockading the besieged southern port city of Mariupol, where Russian officials say they are in full control.

In what appeared to be its first official accusation of abuses targeting Russians, the Kremlin said at least six air strikes had hit residential buildings in the border region of Bryansk, wounding seven people including a toddler.

Russia sparked fears of a return to conflict around Kyiv on Wednesday when it threatened to attack the capital’s strike command centres in retaliation for any strikes on Russian soil.

But in eastern Ukraine, civilians say they have “no rest” from bombardment, including in Severodonetsk, the last easterly city still held by Ukrainian forces.

Now little more than a ghost town, the settlement just kilometres from the front line has already buried 400 civilians, according to Lugansk regional governor Sergiy Gaiday.

“There’s no electricity, no water,” Maria, who lives with her husband and mother-in-law, told AFP amid a din of shelling that she said never stops.

“But I prefer to stay here, at home. If we leave, where will we go?”

Tamara Yakovenko, 61, and her 83-year-old mother had decided to run the risk of fleeing Severodonetsk, where “every 10 or 15 minutes there are bombings”.

“We used to receive humanitarian aid, but now nobody remembers us. Some people try to cook outside on a fire… And boom, boom… everyone has to run back to the basement,” Yakovenko said.

“All night until morning, there is no rest.”

The United Nations announced the release of US$100 million to fight hunger in Yemen and six African countries at risk of famine due to the war disrupting food supply chains.

“Hundreds of thousands of children are going to sleep hungry every night while their parents are worried sick about how to feed them,” said UN Emergency Relief Coordinator Martin Griffiths.

“A war halfway around the world makes their prospects even worse. This allocation will save lives.”

Investigators have descended on areas around Kyiv previously occupied by Russian forces, looking into reports of war crimes that Russian President Vladimir Putin has dismissed as “fakes”.

The atrocities — some of which were witnessed by AFP — have led Biden to accuse Putin of genocide, a term key European partners including France and Germany have hesitated to use.

The French government, which has allocated EUR100 million (RM458 million) for humanitarian support to victims of the conflict, said its embassy would return “very soon” to Kyiv from the western city of Lviv, where it had been relocated after the invasion. — AFP