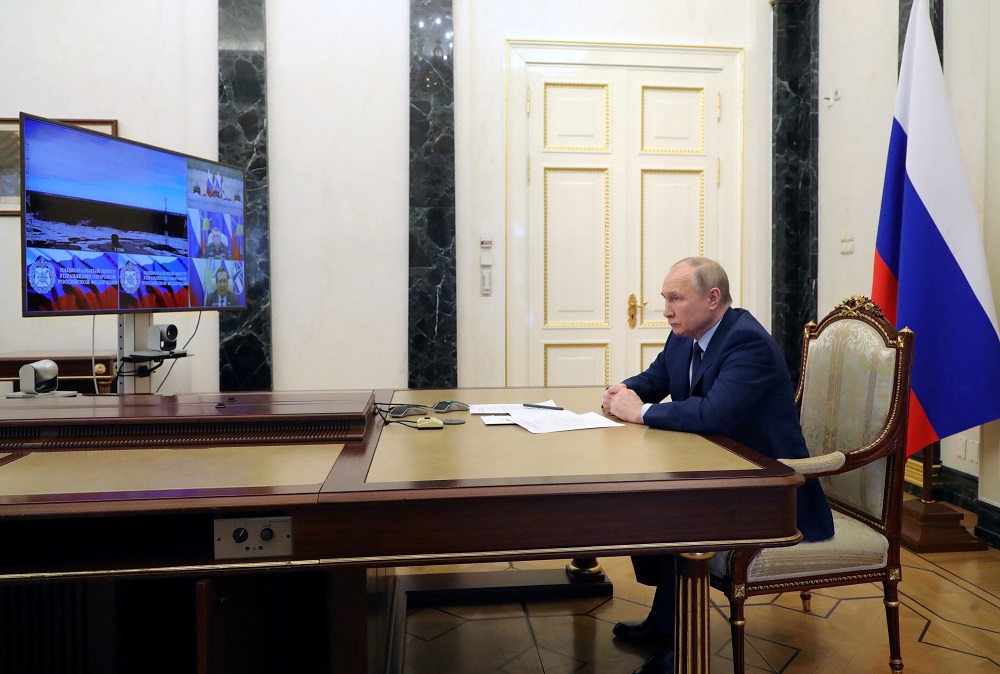 The Sarmat intercontinental ballistic missile is launched during a test at Plesetsk cosmodrome in Arkhangelsk region, Russia, in this still image taken from a video released April 20, 2022. — Russian Defence Ministry/Handout via Reuters

Putin was shown on TV being told by the military that the long-awaited Sarmat missile had been test-launched for the first time from Plesetsk in northwest Russia and hit targets in the Kamchatka peninsula, nearly 6,000 km (3,700 miles) away.

The test of the Sarmat, under development for years, did not surprise the West, but came at a moment of extreme geopolitical tension. Russia has yet to capture any major cities since it sent tens of thousands of troops into Ukraine on February 24.

Ukraine’s defence ministry was not immediately available for comment.

“The new complex has the highest tactical and technical characteristics and is capable of overcoming all modern means of anti-missile defence. It has no analogues in the world and won’t have for a long time to come,” Putin said.

“This truly unique weapon will strengthen the combat potential of our armed forces, reliably ensure Russia’s security from external threats and provide food for thought for those who, in the heat of frenzied aggressive rhetoric, try to threaten our country.”

Announcing the invasion eight weeks ago, Putin made a pointed reference to Russia’s nuclear forces and warned the West that any attempt to get in its way “will lead you to such consequences that you have never encountered in your history.”

Days later, he ordered Russia’s nuclear forces to be put on high alert. “The prospect of nuclear conflict, once unthinkable, is now back within the realm of possibility,” United Nations Secretary-General Antonio Guterres said last month.

Russia’s nuclear forces will start taking delivery of the new missile “in the autumn of this year” once testing is complete, Tass quoted Dmitry Rogozin, head of the Roscosmos space agency, as saying yesterday.

Jack Watling of the RUSI think-tank in London said there was an element of posturing and symbolism involved, less than three weeks before the annual Victory Day parade where Russia shows off its latest weapons.

“The timing of the test reflects the Russians wanting to have something to show as a technological achievement in the lead-up to Victory Day, at a time when a lot of their technology has not delivered the results they would have liked,” Watling said.

Douglas Barrie, senior fellow for military aerospace at the International Institute for Strategic Studies, said the launch was an important milestone after years of delays caused by funding issues and design challenges.

He said more tests would be needed before Russia could actually deploy it in place of ageing SS-18 and SS-19 missiles that were “well past their sell-by date”.

Barrie said the Sarmat’s ability to carry 10 or more warheads and decoys, and Russia’s option of firing it over either of the Earth’s poles, posed a challenge to ground and satellite-based radar and tracking systems.

Igor Korotchenko, editor in chief of Russia’s National Defence magazine, told RIA news agency it was a signal to the West that Moscow was capable of meting out “crushing retribution that will put an end to the history of any country that has encroached on the security of Russia and its people”.

Ukraine has mounted stiff resistance and the West has imposed sweeping sanctions to try to force Russia to withdraw forces Moscow says are on a special operation to degrade its southern neighbour’s military capabilities and root out people it calls dangerous nationalists. — Reuters